Jayhawks a hit at Ladies Night Out

Kansas coach Bill Self talks to a crowd full of women in Allen Fieldhouse during the annual Ladies Night Out on Thursday. 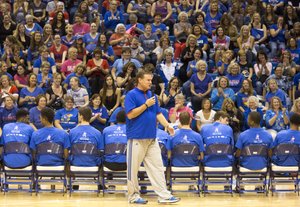 Just a freshman, Devonté Graham showed the smarts of a seasoned point guard in speaking before 450 women at Bill Self’s fifth-annual Ladies Night Out breast cancer research fundraiser on Thursday in Allen Fieldhouse.

“I came here because Kansas ... has the best looking women,” Raleigh, North Carolina native Graham said to screams and loud applause during a question-and-answer portion of the event.

The Jayhawks ran shooting drills with the participants, signed autographs, posed for pictures and hosted a tour of the weight room during the proceedings.

“I chose Kansas because it’s the best place I’ve ever seen,” freshman guard Sviatoslav Mykhailiuk of Ukraine told the crowd. He and emcee Self pronounced Mykhailiuk’s name several times so the fans could be well-educated for the coming season.

“I chose Kansas because I wanted to play for the best coach in America,” junior Jamari Traylor said to loud laughter following his obvious attempt to butter-up Self.

This was Traylor’s fourth Ladies Night Out so he knew the drill rather well.

“It’s fun putting a smile on their faces,” Traylor said of the fans, noting he didn’t mind hugging many of the women who were in line for pictures. “I’m all for the show, so it’s all right,” the Chicago native cracked.

Call him Svi: By the way, for the correct pronunciation of Mykhailiuk, click here.

Lucas returns: KU sophomore forward Landen Lucas returned to practice Thursday. He had missed two weeks with a stress fracture in his leg.

“He’s in full contact, back full speed. Today he did fine,” Self said.

Self on the battle for starting point guard: “It’s going OK. Devonté is going to be really good. He’s thinking instead of playing. He’s so conscientious he wants to do what we want him to do, but he’s not quite comfortable yet. Frank’s done fine. Conner’s done fine,” Self added of sophs Frank Mason and Conner Frankamp. “But I would say we really need Devonté to kind of get more comfortable to give us our most effective backcourt back there.”

Of practices in general: “It hasn’t been exceptional, but the guys are trying hard. We’re probably a week behind where I wish we were. I think that’s usually the case with most every team we have. I do like them a lot and they are trying hard,” Self said.

Monday’s show: KU has sold about 5,500 tickets for Monday’s “Celebrating 60 Years” event in Allen which will feature 10-minute speeches from Self, Ted Owens, Larry Brown and Roy Williams and a chat session between the guests and host Jay Bilas. There also will be videos and maybe other surprises at the 7:30 p.m., event.

“The net proceeds all go to charity so we’d like to get as close to 7,000 in here as we can,” Self said. “The turnout and numbers have been really good. We are not that far off from capacity. We think anything above 7,000 wouldn’t maximize the evening.” Tickets are available at 1-800-34-Hawks and kuathletics.com

Recruiting: Ivan Rabb, a 6-9 senior forward from O’Dowd High in Oakland, California, will visit KU the first weekend of November, JayhawkSlant.com reports. The No. 7-ranked player in the Class of 2015 is considering KU, Arizona, Duke, North Carolina, UCLA, USC, Kentucky and others. ... KU officially has one scholarship to give in the Class of 2015, but will have more depending on how many players leave the program for the pros. Self said Thursday, “we’re recruiting like we have three. That would be safe (bet).”

Interesting comments by Self, stating 7,000 is the goal for Monday night. Kinda makes earlier comments about filling up the place look ridiculous. Perhaps comments should be withheld when you know nothing about something....but that would take away some of the fun.

So Self is looking to fill 3 spots, which means he expects two to leave. At this point, my NBA leaving bets are on Selden and Oubre. However, several of the draft boards have Alexander consistently in the top 10 I bet we sign 4.

I would bet they sign no more than 3. All the experts think 2016 is a loaded recruiting class with a lot of top level talent. Self may want to save a scholarship for that season, but if that 4th scholarship goes to a top level recruit, then he won't save it.

because it's been reported on by this site in just about every basketball article of the last two weeks, as well as podcasts, blogs, vlogs, etc.

If Oubre stays another year or we sign another top small forward Green will transfer.

Here's what Seth Greenberg said of Greene after taking in practice, etc., this past weekend:

Greene should be a major contributor for the Jayhawks this season, and every time he takes a shot you think it’s going in. But I'm not sure he makes enough winning plays. He rarely makes anyone else better, and does not look like he competes consistently. If he would buy in and give of himself to his teammates, he could be extremely valuable. After observing him for two days, it seems like he needs to earn the trust and respect of his coaching staff and teammates.

Those comments, to me, sound like he's talked to someone on the coaching staff. Squares with Self saying he needed Greene to "buy in" on the defensive end. The kid better buy in.

I had to talk about guys leaving the program. However, recall how lackadaisical he looked last season with some careless turnovers, going back to the end of the Florida game where he killed the miracle comeback with a TO.

on Brennan Green, let's not forget he was just a freshman last year. he will have improved a lot. his lack of concentration was a problem, as was his defense (but most people did not play defense worth a crap last year. I can't see him transferring. but he can make plays, as he did in the K-State game in Manhattan, last year-but he did miss the pass, with a lack of concentration, to seal our fate. I think he has a great year! I also think Perry is gone after this year-I would bet on it!

FYI: I already got my e-mail from K.U. asking if I want to go to Korea, next year, in July. It will cost a pretty penny, but I might do it. The total price for the trip goes down a lot, if there are 2, 3, or 4 people! Hint! LOL

I want to thank Coach Self and all the players who took the time to not only spend time with all the ladies on ladies night but for taking the time to honor my grandson Mason Green. My grandson loves the Jayhawks. Also a special thanks to Sabrina Overfield for thinking about Mason. Rock Chalk Jayhawk