Freshman Kelly Oubre gets stretched in the tunnel as the team waits to be introduced to the crowd during Late Night in the Phog on Friday, Oct. 10, 2014 at Allen Fieldhouse. 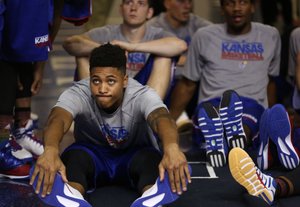 Freshman Kelly Oubre gets stretched in the tunnel as the team waits to be introduced to the crowd during Late Night in the Phog on Friday, Oct. 10, 2014 at Allen Fieldhouse.

Kelly Oubre Jr. raced out of the fabled northwest tunnel of Allen Fieldhouse waving his hands wildly to the fans prior to the start of Friday’s Late Night in the Phog scrimmage on James Naismith Court.

The 6-foot-7 freshman guard from New Orleans kept the energy at a fever pitch after the opening tip of a 20-minute scrimmage.

He grabbed an offensive rebound and scored on the first possession and also swiped a steal but ultimately missed a dunk on the other end with his Crimson team up, 6-3, in what turned out to be a 37-37 tie versus the Blue.

“I thought Kelly was good. He made three plays in the first few possessions that got us possessions, and that’s what he does,” KU coach Bill Self said on a night Oubre scored five points and grabbed three rebounds.

“You could tell (freshmen) they were nervous as we were last year,” said sophomore guard Wayne Selden, who scored 17 points. “It’s just an adjustment period.”

Oubre, who played at Findlay Prep in Henderson, Nevada, last season, said overall he has had a smooth adjustment to college life. It’s because he flat-out loves Lawrence.

“Being here at Kansas is definitely one of the best things that’s happened to me so far in my life. I’m thankful for that. It’s a great experience right now. I’m just loving life,” Oubre said. “I just can’t wait to put this jersey on for real and give it a go to show the world what we can do.”

The player who averaged 22.2 points and 6.7 rebounds a game his senior year at Findlay Prep, didn’t rest on his No. 6 national ranking (by Rivals.com) this past summer. He traveled to Vegas for the LeBron James camp and Los Angeles for Adidas Nations.

Though he said he enjoyed working on his game with collegiate players from other teams at the camps, the highlight of his summer was ...

“Stepping on (KU’s) campus pretty much. Meeting the guys for the first time. You can’t take that back,” Oubre said.

He attended both sessions of summer school and lifted weights and bonded with his teammates in pick-up games where he concentrated on his defense more than offense.

“I take pride in defense. Taking pride in defense ... that’s what every team needs,” Oubre said. “Teams win championships on the defensive end. I use defense to push start the rest of my game, to get my intensity level up, to get myself hyped. Getting stops ... it’s a great feeling.”

He’s already learned a lot from coach Bill Self, whose annually fields one of the best defensive teams in the country.

“Listening to him and buying into his system is going to get me far, and we are going to be great, because he is going to lead to be great,” Oubre said. “I just can’t wait to learn a lot more.”

Oubre showed humility when asked to compare himself and No 4-rated Alexander with one-and-done sensations Andrew Wiggins and Joel Embiid, who arrived at KU ranked Nos. 1 and 25 respectively by Rivals.com.

“There is no comparison to what those guys did. They are still growing and learning, and they’re in the NBA right now,” Oubre said. “They were here last year and did a great job helping the team. Me and Cliff, we’re here to help this team get as far as we can get them. Any individual accolades that may come along the way, let those come, but right now we’re focusing on the team.”

Oubre said he enjoyed watching Wiggins play on TV during his year at KU and before that, too.

“I watched ‘Wigs’ a lot in high school. We played against each other on the EYBL Circuit, AAU circuit,” Oubre said. “He’s a great player. He’s going to do great in the NBA. Just watching him last year being as successful as he was coming out of high school like I am now, seeing what coach Self did with him … it’s incredible, man. I take that every day as motivation. I’m going to work to be the best I can and help my team the best I possibly can. Andrew did the same thing. Now he’s in the NBA. That’s one of my aspiring goals to make it to the NBA. I’m going to go as hard as I can for as long as I can.”

Poetry in motion: Oubre recently gave a glimpse into his personality during an interview with premierball.com. He stated his favorite poem is “If We Must Die” by Claude McKay.

“If we must die—let it not be like hogs

Hunted and penned in an inglorious spot,

While round us bark the mad and hungry dogs,

Making their mock at our accursed lot.

If we must die—oh, let us nobly die,

So that our precious blood may not be shed

In vain; then even the monsters we defy

Shall be constrained to honor us though dead!

Oh, Kinsmen! We must meet the common foe;

Though far outnumbered, let us show us brave,

And for their thousand blows deal one deathblow!

What though before us lies the open grave?

Pressed to the wall, dying, but fighting back!”

“I think about it before every game because it gives me a mental edge,” Oubre told the website.

Point guard update: Self on the play of his point guards at the Late Night scrimmage. Frank Mason had five points and four assists against one turnover, Graham three points, two assists and one turnover, Conner Frankamp seven points, one assist, no turnovers and three boards.

“I thought they were OK. Frank has improved a lot. Devonté is a solid guy. They were fine. Conner is not really a point. He can play some point. He made some there late (in hitting three of five shots). All three bring something different to the table. All did fine.”