Who will be KU's best shooters this season?

Jaylen Brown, the No. 2-ranked basketball prospect in the country who will be attending Friday’s Late Night in the Phog, recently completed in-home visits with coaches from five schools — Kansas University, Kentucky, UCLA, Georgia and Georgia Tech.

The 6-foot-7 small forward from Wheeler High in Marietta, Georgia, told Eric Bossi of Rivals.com he “got good vibes from all five of those coaches. I appreciate everything they told me.”

He singled out messages provided by KU’s Bill Self and UK’s John Calipari.

“They were trying to sell me on going to their school, but like coach Calipari and coach Self told me, it’s not going to be easy. They said: ‘It’s going to be hard when you get here. You’re not going to like us. There are going to be days you feel like you want to go home. If you are that type of kid to go home this school isn’t for you.’ I appreciate them for telling me that,” Brown said.

Brown, who plans to sign in the spring, will visit KU, then Kentucky for its Oct. 17 big Blue Madness and UCLA on Nov. 15. He wrote in his own blog at USAtoday.com that he’s open to talking to other coaches and in fact this week told Scout.com analyst Evan Daniels he’s added North Carolina to the list. He said that as a youngster UNC was his “dream school.”

Add Monk to list: Malik Monk, a 6-3 junior shooting guard from Bentonville (Arkansas) High, will attend Late Night, Jayhawkslant.com reported Monday. He’s the No. 6-rated player in the Class of 2016.

Doors to Allen Fieldhouse will open at 3 p.m. Friday, with festivities to start at 6:30 p.m. Admission is free. 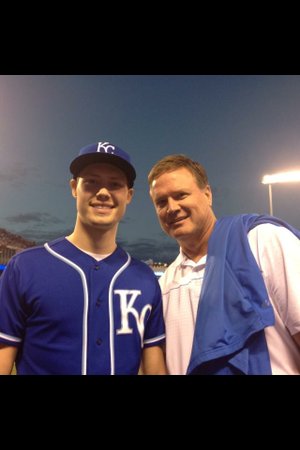 Kansas University basketball coach Bill Self, right, tweeted this photo of him and son Tyler at Sunday’s ALDS-clinching 8-3 Royals victory over the Angels at Kauffman Stadium.

He’s a Royals fan: KU coach Self posted a photo of himself and son, Tyler, from Kauffman Stadium on Sunday night. The Selfs attended the Royals’ ALDS clinching victory over the Los Angeles Angels.

“What a night at the K. Nothing better than baseball with your son. #TakeTheCrown,” Bill Self tweeted.

He also tweeted: “congrats to the Royals. Hope my guys learn to compete like these young fellas. So fun to watch.”

Self said he’s enjoyed following the Royals’ fortunes all season.

“To me, it’s so cool to see a bunch of young kids out there that are men having the time of their life,” he said. “I mean, they are down, 8-7, with two outs in the bottom of the 12th (in wild-card win over Oakland), and they have got a pinch runner in the game that’s the fastest guy in baseball (Jarrod Dyson). And he’s dancing at third base and he hasn’t even scored yet. You just don’t see that with other teams. I mean, to me, that’s cool. I think it’s great.

“I get such a kick out of it because there’s so much strategy involved and everybody thinks it’s so easy (to manage). But that guy over there (Ned Yost) has done an unbelievable job.

“And the other thing that amazes me is, you know, they have to manufacture runs because they don’t have power hitters, where everybody else, you get two people on, you play for a big inning or whatever and we play ... every inning is played trying to get one run for the most part. They are really good. They are really good.”

Brown - hmmmmm seems like he is fairly undecided right now. KY with PT to offer, both home schools and a dream school of UNC yikes.

Very Impressed with the Royals, I was at game 6 in 85 and I have to say it is louder now than it was back then.

I could be wrong, GOD only knows I am a lot lol but something in my gut just tells me the longer this goes and as he has said not signing early so the longer the better I just have this gut, have this feeling that Jaylen ends up signing with us no inside sources just an average hawk fan and that's just a feelin I'm getting dunno nothing really to base this on other then just listening and reading some articles. so I have got really strong feelings on 2 of the recruits now and they are Jaylen Brown and Carlton Bragg. Carlton I've felt for long time he is ours to lose but how can I say for sure? how can anyone say for sure? these are 17 and 18 yr olds we are talking about they can change their mind as fast as my ol lady does at the drop of a hat lol GO HAWKS

It this the legendary poster, black&mild?!?!?

sorry guys to post this on here under this story but just check out an article and couldn't believe what I saw. how many recruits and future recruits will be at late night this Friday. I mean I heard on the five for sure but this was crazy as to how many are coming. they are as follows: official visits, Jaylen Brown, Brandon Ingram, Tyler Dorsey, Stephan Zimmerman, and Marcus Lovett. But this here is whats nuts, had no idea hadn't heard. these guys are unofficial : Carlton Bragg, Malik Monk(2016) Jayson Tatum (2016) Schneider Heard, Trae Young (2017) Mitchell Ballock(2017) Troy Brown(2017 pg) Nick Rakocevic(2016) Kobi Simmons, Tyler Cook, And Marcus Balden. again sorry for posting this here but just seen this, reference off 247 sports.com maybe I'm stupid but I just had no idea this many were going to be here Friday night HUGE recruiting luxury awesome for Kobi Simmons Jayson Tatum among the others. one last thought. I wonder if this Tyler Cook maybe just maybe might be some kind of relation to the cookie monster, NORM COOK former player from some time back anyways thanks guys. GO HAWKS

Self... you're a great coach, but please refrain from saying Yost did an "unbelievable" job. If it was anyone else managing the Royals, they would have won their division and not got 2nd. There's a reason why #yosted is trending

Ryan ~your's is simply one more opinion ~ no more, no less. Unless you're a "psychic", and I don't believe you, or anyone else I've known, is ~ you have absolutely no knowledge as to what or who, would have done ~ period. Cheer up ~ celebrate the Royals' amazing success this season, and especially this post-season. It appears that you have a severe case of that dreaded sports fan chronic, potentially fatal disease ~ terminal pessimism.

So what teams' fans are mad at their managers today? Let's see, Detroit's fans, Washington's fans, Dodgers fans. Just.Win.Baby ... the best saying of all time. You win, you shut up all the critics.

i haven't been this irritated at a royals manager in the post season for a very long time.

hahaha assuming you're being clever, I enjoyed this.

Yeah, Yost is as bad as Dick Howser. And now he just Yosted the Angels and my chance at attending the WS.