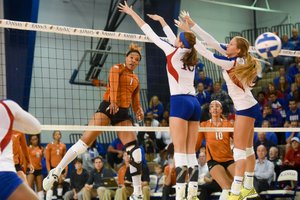 Jerry Wang/Special to the Journal-World 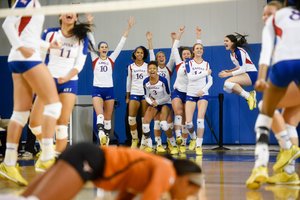 Jerry Wang/Special to the Journal-World

The Kansas bench celebrates a point after jumping out to a 4-0 start during the fourth set. The Jayhawks were unable to hold off the Texas offense, losing the set 21-25 on Sunday, Oct. 5, 2014, at Horejsi Center.

Texas continued its domination of Big 12 volleyball Sunday, downing Kansas University, 3-1, for the undefeated Longhorns’ 19th straight victory in Big 12 matches, 11th straight on the road and 21st in a row versus the Jayhawks.

Texas, which was led by Khat Bell’s 15 kills, had won seven of its 10 matches this season by 3-0 scores. KU has been swept just twice in the past 62 matches and was not blanked Sunday.

“No way shape or form are we pleased with a four-set loss, but we are pretty pleased with the response after the break, and those are things we’ll build on,” Bechard said.

“I think (it’s) not playing the level we need to play at, and we’ve seen three really good teams to start conference play and a very elite team today,” said Bechard, whose Jayhawks have also lost to Oklahoma and Kansas State in five-set decisions. “We are going to be fine. It’s not the start we envisioned for the Big 12, but I think we saw moments today we can build on.”

Cassie Wait had 26 digs and Ainise Havili 11 for the Jayhawks, who travel to Baylor on Friday.

“I think we are all there right now,” Albers said. “We just need to keep our energy high. That’s the No. 1 thing we need to focus on. If we do that, things will turn around in time.”

Texas was expected, Kansas State is always a hard-fought rival battle to 5 sets it seems like, and it seems they were tripped up by OU...

They'll bounce back in time to qualify for the NCAAs though, I believe in the team.

I think the team will find itself eventually. Lot of new players to go with upperclass Albers, McClinton and Dockery. Seems the team lost maybe one too many seniors. Would be nice to have one more elder statesman. It's time to start winning though. Really need to win the next 2 or might have to call this a rebuilding year.