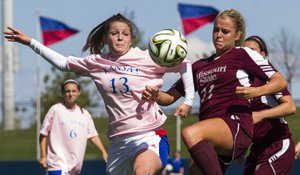 With its fifth straight victory, Kansas improved to 13-1 and claimed its program-record ninth home win. Missouri State fell to 5-7-1.

“We definitely executed better in the second half, but I felt like there were a lot of areas where we could have done better today,” KU coach Mark Francis said. “I’m definitely happy to get the win, but we have five tough conference games left, and we’ll need to play better than we did today if we want to be in any of those games.”

Senior goalkeeper Kaitlyn Stroud failed to make a save for the first time this season but still picked up the victory, her 12th of the season and 30th of her career.

KU will travel Friday to face Texas in Austin, Texas. Match time will be 7 p.m.