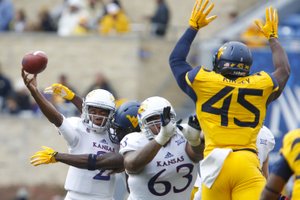 Images from Saturday's game between the Jayhawks and Mountaineers at Milan Puskar Stadium in Morgantown, West Virginia

Morgantown, W.Va. — Starting quarterback Montell Cozart played the first half and second-string QB Michael Cummings played the second in Kansas University’s 33-14 loss at West Virginia Saturday. After the game, interim head coach Clint Bowen said no decision had been made about the future of the position.

“We'll reevaluate that on Sunday,” Bowen said. “We'll get with the offensive staff, we'll get with everyone, and we'll continue to try to be as creative and innovative as we can with our offense.”

Asked how he thought Cozart handled being sent to the bench, Bowen was boastful.

“Montell's a tremendous young man,” he said. “He's all about what's best for this team and what gives us the best chance to win and he took it.”

Sophomore T.J. Millweard also played one possession in the loss, completing one pass for four yards on KU's final series.

It was a day he had waited nearly his entire life for, and his players paid him the ultimate compliment when it was over.

Sure, KU lost at West Virginia in Bowen's first game as the program's head coach, but he did not trip on the way out of the tunnel, his voice did not crack during the pregame, postgame or halftime speeches and he did not show any signs that the moment was too big for him.

“I felt like he was pretty cool,” senior cornerback JaCorey Shepherd said. “He handled it well.”

Bowen, who handled head coaching and defensive coordinator duties for the first time, described his behavior during the game as “business as usual.” But he did admit that the emotions of leading his alma mater onto the field and being the guy with the head coach's headset was a rush and won't soon be forgotten.

“It's a great feeling,” he said. 'I'm very proud to be a very part of this team, this program and this university. To be in that role truly is an unbelievable honor. I appreciate, with every ounce of my body, what it means.”

Senior receiver Nick Harwell, who added a dose of good news to Bowen's debut with a 76-yard punt return late in the game, said the whole team could feel how special Saturday was for their new coach.

“He was real emotional,” Harwell said with a heavy sigh. “It’s always been his dream. I’m really happy for him. After he got the emotions out of the way he was really confident, very positive inspirational, positive about the game.”

Saturday marked a sad day for the KU football family and the Jayhawks recognized it by wearing a black sticker on the backs of their helmets.

One year ago Saturday, former KU commitment and Shawnee Mission West standout Andre Maloney passed away after collapsing on the sideline of his high school game. Maloney has maintained a presence with the program in several ways since his death. Freshman Joe Dineen wears No. 29 in his honor. And Maloney was celebrated on signing day back in February and also included in this year's media guide. Saturday, the patches worn by the Jayhawks had the initials “AM” written in white to honor his memory.

“He's always gonna be a part of the Jayhawk family,” Bowen said of Maloney.

Kansas officials confirmed that Charlie Weis Jr., the son of former KU coach Charlie Weis, was no longer in his role as student manager and did not attend Saturday's game.

There was talk about Weis Jr., staying with the team in a slightly different role under Bowen, but he ultimately decided to leave town with his father, who left Lawrence on Friday.

West Virginia receiver Kevin White was a big reason for KU's struggles in the first half. He finished the game with 132 yards and a touchdown on six receptions, with nearly all of that coming in the first quarter.

Added Bowen: “Kevin White's a tremendous player. I can't imagine there's gonna be a better wide receiver in the conference. He can run, he's got a big body, he makes the contested catches. He's really a great player.”

Junior running back De'Andre Mann left the game with an injury and did not return. Bowen said after the loss that he did not know Mann's status and would get more information from trainers today....

The Jayhawks won Saturday’s opening coin toss and chose to defer its choice to the second half. West Virginia elected to receive the first-half kickoff.... Lawrence native Preston Randall, a 6-foot-1, 195-pound running back, made his debut with the Jayhawks..... Temperature at kickoff was around 50 degrees, under partly cloudy skies with winds of 10 mph out of the west.

I guess you missed the game. We did run, one-two yards and a cloud of dust. Made me sick watching the ineptitude of the blockers and the runners

Geeeze Bill you're so negative. Cheer up dude.

Just disagreeing with Brett on the run, run, run. We can't

This is a comment about quarterbacks and change. Malcolm Gladwell wrote the book Outliers. It is a book about the factors that are usually necessary to be successful. One of those factors is what he calls the "10,000 hour rule". In order to be successful a person needs to put in the equivalent of 5 years of full time practice. If we would think about this "rule" in relationship quarterbacks, our quarterback would have a better likelihood of success if he were a person that has been playing the position for some time.

Glad Cummings played and Millweard got in....what does it hurt to give them a shot??

Clearly Cozart may be a great young man, but he is not a D1 QB right now. And to use Cummings is a sign of surrender. Clearly no answer exists. We need real help. Hard to believe the o line can be as bad as they are. I watched players unable to sustain a block even for 1 second.

I said it yesterday as well. Cozart flat can't play the position. He will never be the answer. If we stick with him he'll improve but he'll never be a good QB. I'm not sure where he can play. I don't see his talent. Perhaps he could play receiver or DB. We desperately need to recruit a JUCO QB. Someone like Waters. Someone like these big schools keep finding. They're out there and we need one desperately. IMO Cummings gets the keys going forward. He showed much more ability to run the offense than Cozart and given the first string reps I think he improves and gains more confidence. The Cozart experiment like the Crist and Heaps experiment is now over. All three proved they cannot play at this level or at least for this team. Cozart is too scared to run so we're left with no choice since we MUST have a mobile QB. I hope Bowen see's this as well.

Here here. The guy can't play. As I said never thought I would welcome a guy like Jordan Webb back and we thought he was bad.

Yeah Webb would be great at this point.

Just busting your chops with this question, but which MC, KU does have two of them that play QB ya know.

Wait what??? You think he's gonna move to running back? He won't even run now and asking him to do it on every play is flat not gonna happen. I say move him to scout team maybe there he watch and learn.

Cozart needs to red-shirt next year and work his tail off and bring him back in 2 years. In the mean time find a serviceable juco kid to play QB and that should create some competition when Cozart does come back. BUT, it all starts with the O-line, and we need an immediate upgrade there.

Someone answer this for me, how does K-State have 5 offensive lineman all from the state of Kansas and that has been a solid unit for them the last 2 to 3 years?