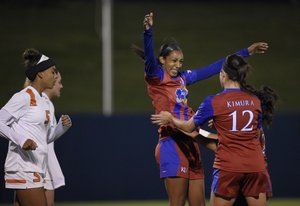 The No. 16-ranked Kansas University women’s soccer team returned to Rock Chalk Park on Friday for the first time since its season opener, and the Jayhawks were more than happy to be back.

KU and Oklahoma State crammed all their scoring in the first 18 minutes of the Jayhawks’ 2-1 victory at their new soccer home.

The crowd of 1,186 saw the Jayhawks take an early lead, when junior Liana Salazar scored her Big 12-leading ninth goal on a penalty kick in the third minute.

“I practice PKs every single day, so I’m very calm,” Salazar said. “All of the experience that I have gives me confidence to be very relaxed at the time I have to take a PK.”

Allie Stephenson and Courtney Dike weaved through the Kansas defense to set up Mercado’s blast past the outstretched arm of Kansas goalie Kaitlyn Stroud.

Mercado’s goal was the first Stroud had allowed in more than 360 minutes and only the sixth ball that found the back of the net against Kansas this season.

The Jayhawks wrapped up the scoring for the night in the 18th minute when they caught the Oklahoma State back line off guard. Ali Kimura beat an OSU defender to a loose ball and centered it to Ashley Williams for her fifth goal of the season.

The Cowgirls’ best chance from there on out to tie it was on a penalty kick from Stephenson in the 53rd minute, but her shot caromed off the top of the crossbar.

While the scoring came to a halt early in the match, the fouls did not. The Jayhawks and Cowgirls entered Friday as the top two teams in the Big 12 in fouls and went on to combine for 34 of them: 18 for Kansas and 16 for OSU.

The physicality of the match did not come as a surprise to Salazar.

“Ironically, this is our alumni weekend, so we had a bunch of alumni here, old players,” Francis said. “There was a lot of them from the team that won the Big 12 in 2004.”

This is turning out to be a special season by a special team. The chemistry on the field is really impressive.