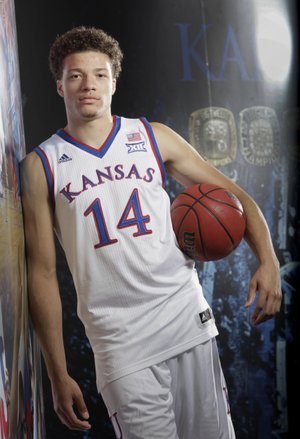 A 55-percent shooter as a sophomore, Perry Ellis is expected to unleash his share of jump shots from the perimeter during his junior season at Kansas University.

But the 6-foot-8 Wichita native also figures to set up shop in the lane to convert off a move he and his teammates affectionately refer to as “The Blender.”

‘“The Blender’ is, I get the ball in the post, and I’m just doing a lot of pivots, getting ’em off balance. They don’t know what I’m about to do, and I throw a jump hook real quick. I’m moving around a lot in the post, just pivoting around, just faking,” Ellis said Thursday at KU basketball Media Day in Allen Fieldhouse.

With a shot as smooth as a drink that comes out of a blender, KU’s leading returning scorer (13.5) and rebounder (6.7) on Thursday joined West Virginia’s Juwan Staten as the only unanimous picks to the preseason coaches All-Big 12 team. They were joined by Iowa State’s Georges Niang, Kansas State’s Marcus Foster and Oklahoma’s Buddy Hield. Staten was tapped player of the year, ISU’s Bryce Dejean-Jones newcomer of the year and KU’s Cliff Alexander and Texas’ Myles Turner co-freshmen of the year.

Ellis was the only Jayhawk to receive a vote for the all-league team. KU has won the last 10 league titles.

“It does shock me. All these great players we have,” Ellis said. “I think that’ll be motivation for all of us to work even harder and prove we’re a good team.”

Noted KU coach Bill Self: “The one thing I was really surprised at is not one of our players got a vote — a vote — other than Perry. I mean, we didn’t even have an honorable-mention guy other than Perry, who made first-team. So that may be something that we tell our guys. Because we have got plenty of good enough players that could at least receive some consideration, I think.”

Self on KU’s possible defensive improvement: “I hope so, because we stunk last year. When I say we stunk, we were probably still the best or second-best defensive team in our league, but that’s not who we’ve been for years. We’ve been better than that.”

Self on third-year sophomore forward Lucas: “Landen may have had the best spring and summer of anybody. He’s had a good fall, too. He’s going to play. He’s fighting for major minutes. He and Cliff (Alexander) are probably right now based on what I’ve seen going to head-to-head for a lot of major minutes.”

Self on freshman Kelly Oubre Jr.: “He’s probably the guy that it’s harder for me to make a true evaluation on right now because the guy is really good. He’s good enough that he’s not going to be at Kansas for a long time. He can score the ball, but he’s so good around the rim, he’s so good defensively getting out in passing lanes, he’s such a good offensive rebounder. There are a lot of things they can do well that are not your typical two- or three-guard type things. We have to find a way to post him and do some stuff like that that’s a little bit different than what we’ve been doing.”

Self on possibly playing small ball: “I can see a scenario where Wayne (Selden, Jr.) plays point with two big wings, and I can see a scenario where Frank (Mason III) and Devonté (Graham) or Frank and Conner (Frankamp), whoever it is, is in the game at the same times. I don’t see many scenarios where all three will be in the game together, but I think we can definitely play small. Frank is tough enough. He allows us to play small because I think he can guard a bigger guard.

Self on Ukrainian freshman Sviatoslav Mykhailiuk: “He doesn’t speak the language as well as he understands it. You know, Joel (Embiid, Cameroon) understood it perfectly, but he always acted like he didn’t. He was a master of that. Svi isn’t as bright as Joel in that regard, as far as being a con. Joel was great at it. You know, when things are going good, Joel understood every word. When things were going bad, ‘Oh, coach, I don’t understand at all. (Speaking with heavy accent).’”

“I think Svi gets it, and he understands. But he’s a really talented guy. You’ll see how impressive he is athletically, with his skill set and all those things. The only knock on him right now is he’s young. He should be a high school junior or senior, as opposed to a college freshman. But he’s going to be really good.

“We talk about the things he may be lacking because of his age. Well, he’s the only one that’s been out there playing against 28- and 30-year-olds consistently (at World Cup). So it may not be as much of a factor as we might think.”

Mykhailiuk is loving Lawrence. “They say college is the best time of your life. I can see that,” he said with a smile.

With the Program: Freshman Graham was named best leader/teammate by the Marines who ran the recent “Program” at KU.

“There were three guys it came down to. It was Kelly and Wayne and Devonté, and those guys picked Devonté, which I think was pretty good for a freshman. You know, Kelly Oubre Jr., is going to be a good leader, too. Those three are probably our most three natural leaders, I would think,” Self said.

Oubre on KU: “Pressure, no. Comfort, yes. I see all the guys around the locker room, the tradition and all the guys that came before me. They’ve paved the way for me to be here right now to be successful. I thank those guys and I’m here to carry the torch, like they left for us, to be great this year. I can’t wait to start.”

Self's quote about Emiid is hilarious. Sometimes I wish we were able to see the true personalities of such student athletes really come out in the media. We rarely do, however, since they're so well trained to always say the right thing. Emiid's twitter was funny last year, but he's taken it to another level since leaving college.

I'm gonna miss that goofy giant like nobody's business. His twitter is out of this world amazing. Even my most obnoxious missouri and kstate friends can't help but like him

I wonder if Danny Ferry follows JoJo on twitter. Ha!

I'm glad that Coach Self is honest about KU's defense last year. The Hawks need to step up and play consistently on D as a unit.

I just hope Perry doesn't pick-up a lot of traveling violations with all of his new found pivots :)

How does Wayne Selden not get 1 vote for All-League? Not 1? That's mind boggling to me and pretty stupid on the other coaches' part. Talk about motivation... If I were an opposing coach in the Big12, I'd vote all Jayhawks to give them an inflated ego in the hopes they underachieve. I would not be looking to give them any added motivation.

This is perfect if you think about it. He will have a chip on his shoulder the size of a Giant bluff of chalk this year.

Head Coach Bill Self has proven he is a great basketball and I don't intend my comments to question in any way his decisions for this years Kansas Basketball Team. But I have to express my hope HCBS doesn't overlook Conner again this year, as his comments seem to indicate. Conner proved himself last year when Kansas needed a calm head at point in the first round game against Eastern Kentucky. If Conner had started against Stanford there is a good chance we would have won that game. ( Tharpes numerous turnovers put Kansas in a huge hole before Conner came into the game.) But sadly we will never know what the outcome would have been if Conner had started the second half instead of Tharpe. Conner showed his calmness and ability to handle the team under fire in the biggest games of the season. He deserves a reasonable chance to do the job, He has earned that right with his performance in the NCAA Tournament (imho). From HCBS's comments he looks to be indicating Conner will be the 3rd choice at point behind Mason and Graham. Don't get me wrong Conner needs to earn the job but I am afraid HCBS, by his comments, is going to work Graham and Mason a lot in the early games before the Kentucky game in November. If Conner can't beat out the other guards so be it. But I just want to see him get his shot with enough in game time to demonstrate his abilities and not get caught in the hit your in and miss you out game of last year. Coach has admitted it was not a good system and I pray Conner gets his chance to truly show his talent before the UK game. Yes I want the best team on the floor as much as possible. I guess I am saying Conner Frankamp in my humble opinion should be part of that team given his past performance.

Conner needs to knock down open 3 pointers, it would not hurt if he could be a better defender too. I do not think he was overlooked as much he was just not the better option for Self due to these two factors. PG looks like Mason/Graham 1,2 and Seldon/Greene at SG. Conner starts hitting his 3 pointers he will get PT.