Kansas forward Perry Ellis (34) celebrates after forcing turnover by Tennessee forward Derek Reese (23) during the first half on Friday, Nov. 28, 2014 at the HP Field House in Kissimmee, Florida. 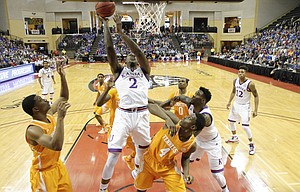 Kissimmee, Fla — A virtual no-show against Kentucky and his team’s most productive player two days into the Orlando Classic that concludes Sunday, Perry Ellis’ disparate performances could say as much about his opposition than himself.

Ellis, as is the case with just about every college basketball player, is not equipped to outplay Kentucky’s deep pool of giants.

Ellis scored four points and had two rebounds in 21 minutes against top-ranked Kentucky.

In three games since that night, Ellis has made every opponent look as overmatched trying to guard him as he looked trying to slow down Kentucky.

Ellis dropped 24 points to go with 13 rebounds and three assists in Friday’s 82-67 victory against Tennessee at HP Fieldhouse.

Kansas faces Michigan State at noon Central time, which gives Ellis a chance to reveal to what extent he has improved since that night in Atlanta, when he wasn’t ready for the Spartans’ big, physical post players two years ago.

“Michigan State, we’ve had a lot of battles with them over the years,” Kansas coach Bill Self said. “Nobody’s going to play tougher. Nobody’s going to get out in transition better. Nobody’s going to rebound better than those guys. It’ll be a Big Ten type game. I imagine it’ll be a pretty physical game and one in which whoever’s the winner will be the one that can make plays over defense because they’re not going to give you anything cheap, if we play them.”

Michigan State will try to limit Ellis’ scoring opportunities. He’s not an easy guy to guard, whether in a man-to-man defense, or as Tennessee was in most of the time, a zone.

“We just tried to get the ball to the middle and let Perry go to work in there,” teammate Wayne Selden Jr. said. “He can score at all three levels.”

Michigan State, competing with bigger, more explosive bodies than either Tennessee or Rhode Island, represents the best measuring stick so far this season for Ellis.

He entertained the pro-KU crowd Friday with a variety of memorable plays. He couldn't quite get a grasp on a long rebound in traffic and took a step toward the perimeter to try to get it again. But this time, because he had seen Devonté Graham breaking free, Ellis didn't try to catch it. Instead, he directed it with force and accuracy to Graham, who took it in for a dunk. On another play, with the ball near the basket, he executed such a quick spin dribble that he created the illusion of making the defender vanish in thin air and then dropped the ball into the basket.

Ellis leads Kansas in scoring (15.0) and rebounding (6.6). Now it's time to see what sort of Big Ten basketball player he would have made.

More news and notes from Kansas vs. Tennessee 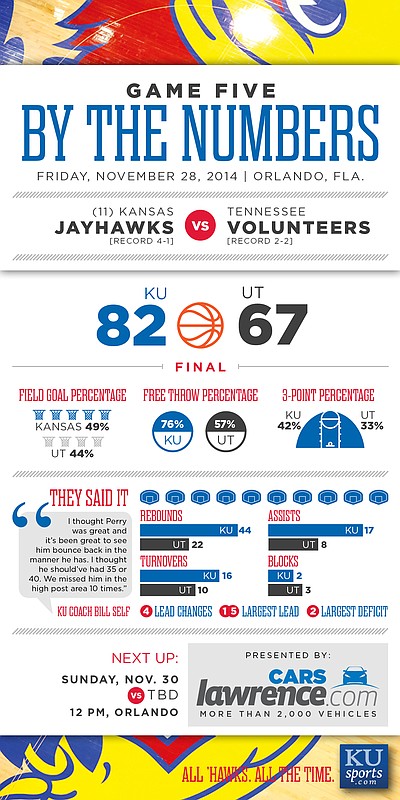 By the Numbers: Kansas beats Tennessee, 82-67, in Orlando Classic semifinals

MSU, FL, Georgetown and Utah...the next 4 games are huge for the Hawks and Ellis. Nobody's ever doubted Ellis' abilities, only his toughness when the going gets tough. This will be his and the team's chance to gauge if we'll be able to compete with UT for the Big 12 title.

We all pulling for a big game Sunday!

Marquette may take exception to your early post :) but I think you're right. It looks like Florida will be 3-3 (speaking of premature declarations) when they come to town, so we should be ready for a dogfight. All of these four games are tough, but we should be favored in all of them. I'm very interested in the Georgetown game, too see how our players (especially the freshmen) react in a true road game.

right with you Mike. It is going to be a war I think at Georgetown they always like physical and I think the kids name is Smith he is huge maybe not the most gifted offensive player but not bad but just big and physical hard to move, get around hard to box out on him so big would not be good to see a Jamari- Smith encounter. Jamari just does not have the physical presence to hold against Smith will need Cliff to stay foul free and work hard I think we can win for sure but then on the other hand no giveme I think actually the freshman will be ok I don't think the gym they play in is that big not real intimidating not for sure though. I think we have found our point guard-guards Frank looks very solid so far this year not only the point but a point who can score when needs to from time to time and Devonte backing him up at times I think that's a position that's got fixed looking forward to the rest of the season going to be a tough conference GO HAWKS

That first sentence had some serious fiber, Tom.