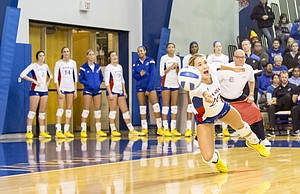 It wasn’t always as easy as it looked for Kansas University’s volleyball team on Wednesday in a straight-set, 25-19, 25-23, 25-15 victory over West Virginia.

In the second set, the Jayhawks dominated play, jumping to a 20-8 lead before the Mountaineers scored the next 10 points and 13 of the next 14.

Eventually, KU found itself trailing 23-22 without any timeouts left. That’s when sophomore Tayler Soucie rose up for a kill to tie the score, then freshman Kelsie Payne checked in off the bench and ended any chance of an upset bid with a block and set-winning kill that pumped up the crowd of 1,282.

“I wanted it to be over, so I made it happen,” said Payne with a wide smile, who finished with 10 kills and a .692 attack percentage. She also added three blocks.

After losing in straight sets to third-ranked Texas on Saturday, the Jayhawks have shown they can bounce back quickly from losses, and they are a long way away from the team that started 0-3 in Big 12 play.

“They matured,” KU coach Ray Bechard said. “I think early in the year, that 21-all in the second game would have created some different issues. They handled it well.”

Senior Sara McClinton led the team with 11 kills, including a career-high three aces. She only had served five times in her first three seasons.

Freshman setter Ainise Havili recorded 37 assists, the seventh match in a row she’s posted more than 30, which gives her 1,225 assists on the season, breaking the KU freshman assists record.

“I think we’re all coming together at the right time,” said Soucie, who had nine kills and six blocks without any attacking errors. “I mean, the beginning of the season was a little rough. We were a little up and down. Right now, our chemistry is hitting and we’re where we want to be.”

The Jayhawks have won nine of their last 12 matches, and are confident about their chances of earning a spot in the NCAA Tournament.

KU will play host to Oklahoma (20-9, 10-5) in its regular-season finale and Senior Day at noon on Saturday. A win would tie the Jayhawks for second place in the conference standings.