KU's Kelly Oubre, Jr, looks for a block on Rider's Jimmie Taylor, on Monday November 24, 2014 in a not-bracketed game of the Orlando Classic. 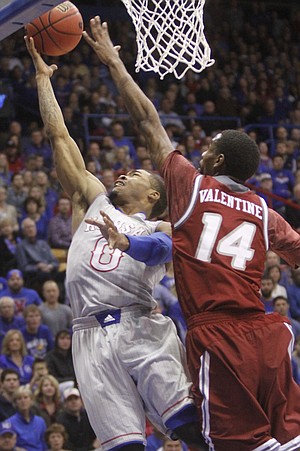 Images from Monday night's matchup between the Jayhawks and Rider University at Allen Fieldhouse, marking the official start of the Orlando Classic..

Bill Self: KU didn't look 'real good' vs. Rider, but got better

Kansas University men's basketball coach Bill Self speaks with the media following his team's 87-60 victory over Rider, Monday at Allen Fieldhouse. The KU coach said while his Jayhawks didn't look really good, they did get better, before heading to Orlando for a holiday tournament.

Greene, Ellis and Alexander on responding to tough loss

Kansas University’s Cliff Alexander and Kelly Oubre Jr., are included on the preseason Wayman Tisdale Award watch list. The award, which goes to the country’s top freshman, is sponsored by the USBWA. Duke’s Jabari Parker won a year ago.

Off to Florida: After defeating Rider, 87-60, the Jayhawks were to leave Tuesday for Orlando, Florida, site of the bracketed portion of the Orlando Classic at HP Fieldhouse in Kissimmee, Florida. KU will practice Wednesday in Florida, then meet Rhode Island approximately 1:30 p.m., Thanksgiving Day.

If KU beats Rhode Island, it would meet the winner of the Santa Clara-Tennessee game at 11 a.m. Friday. Teams on the other side of the bracket are Marquette, Georgia Tech, Michigan State and Rider. Rider will play Michigan State at 5:30 p.m., Central Time, Thursday in another first-round game.

More news and notes from Kansas vs. Rider 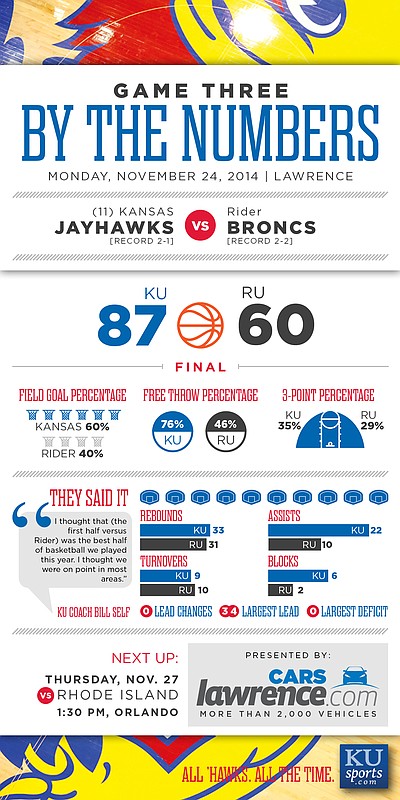 Not fond of these boys playing on Thanksgiving. Did not seem to work well last year. I think they miss their mommy' s cooking.