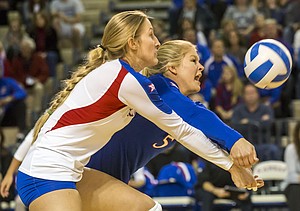 Four weeks ago, Kansas University’s volleyball team traveled to Iowa State, left with a loss and returned home with a losing record in the Big 12.

A Cyclones visit to Horejsi Center on Wednesday night served as a friendly reminder of how far the Jayhawks have come since then. KU won for the fifth time in its last six matches, with a 25-17, 25-23, 20-25, 25-15 home victory in front of a packed house.

Now, with just three matches left in the regular season, Kansas (20-7 overall, 8-5 Big 12) finds itself back in the upper echelon of the league, tied with Kansas State and Oklahoma for second place, behind league leader Texas (21-1, 13-1).

“I think we always had that belief,” said KU sophomore Tayler Soucie, whose 13 kills helped Kansas win its fourth match in a row.

Coach Ray Bechard said his Jayhawks have come a long way — not just in the past few weeks, but also since staring 0-3 in the Big 12.

“I just think our team’s maturing a little bit,” Bechard said of a roster that features seven freshmen (or newcomers, as he likes to call them). “We stayed true to how we want to compete and how hard we want to work. They’ve been resilient.”

Freshman setter Ainise Havili passed out 51 assists in the 3-1 home win, and freshman middle blocker Kelsie Payne returned to the lineup with 13 kills.

When ISU (15-10, 7-7) took the third set from KU, the Jayhawks showed their grit, putting away a hot team trying to force a fifth set.

“It was really good to see us grind and earn points late in the fourth set,” Bechard said, shortly after Soucie and McClinton sealed the match with a block.

Though the Jayhawks have spent the past few weeks winning far more than losing, the coach said their Nov. 1 setback at TCU might have been the turning point.

Senior Chelsea Albers, who came up with 19 digs against ISU, agreed.

”That one, in general, we let down our guard. We lost after being up 2-0. We decided that’s not gonna happen again,” Albers said. “We’ve gotta pick it up and step on people when we can, and not let people start playing with us.”