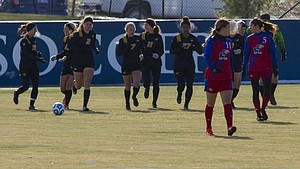 Kansas University’s soccer team had not allowed more than two goals in a game all season prior to its NCAA Tournament first-round matchup against Missouri on Sunday at Rock Chalk Park.

The Tigers came into enemy territory for the first Border War showdown since 2011 and changed that, defeating the Jayhawks, 3-1.

“I think we lost the game because Missouri was better than we were today. So you got to give them credit,” Kansas coach Mark Francis said. “They came out … I thought they out-hustled us a little bit. They came out in a different formation that we weren’t expecting, so we adjusted a little bit at halftime, which I think definitely helped us offensively.”

Taylor Grant scored in the third and 51st minutes to give the Tigers a 2-0 advantage. Grant’s two goals did not come completely unexpectedly, as she leads the Tigers with nine on the season, but Missouri’s game plan did catch Francis and the Jayhawks off guard.

“We’ve watched probably five of their games, and every single game they’ve played a 4-4-2,” Francis said. “They came out today in a 3-5-2, which I thought they may do something a little different. Really they did that because of our midfield, is why they changed it.”

The change in formation allowed the Tigers to hold Kansas midfielder Liana Salazar in check for the first half, but the Jayhawks’ leading goal scorer could not be contained for the full 90 minutes.

Salazar shifted momentum to the Jayhawks with her 13th goal of the season, cutting Kansas’ deficit to 2-1 in the 57th minute.

Salazar deflected all of the credit for the goal to teammates Ashley Williams and Jackie Georgoulis, who received assists for setting up a point-blank shot.

“The ball just came to me, and I just had to touch it,” Salazar said. “As a forward or midfielder, you just have to be in the box and just wait for the opportunity.”

But just as quickly as the Jayhawks put themselves back in the match, they were knocked out of it when Reagan Russell scored nine minutes later to put the Tigers back up by two.

“The killer was the third goal. When we scored that goal and came back, I thought we had the momentum,” Francis said. “And I really thought we would come back.”

Missouri attempted 11 corner kicks to the Jayhawks’ zero, but senior Caroline Van Slambrouck felt that the Jayhawks did a good job of clearing the Tigers’ set pieces.

“I think that is something we have struggled with all year is giving up a lot of corners, but with that being said, we have a lot of very strong girls in the air,” Van Slambrouck said. “I thought we did a good job of marking them today.”

Missouri (12-6-3) advances to the Round of 32 to take on Washington at 6:30 p.m. Friday in Stanford, California, while the Jayhawks concluded the season with a record of 15-6.

“The reality is just you’re done, you’ve lost, and your season’s over,” Van Slambrouck said. “I think the important thing is for everyone to remember how this feels and to learn from it.”

“A year from now, we need to be sitting here having just played in the first round of the NCAA Tournament again,” Francis said, “because I think for our program moving forward, now that we have this facility, there’s no reason that making the NCAA Tournament for us should just be an expectation. It should be a goal.”