Kansas interim head coach Clint Bowen gets airborne as he celebrates a fourth down stop against TCU during the first quarter on Saturday, Nov. 15, 2014 at Memorial Stadium. 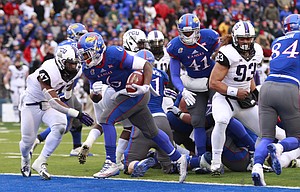 Six games into his eight-game audition for the permanent head coaching job, Clint Bowen continues to build a strong resume for having the interim tag removed from his title at some point in the near future.

Asked after the game if Saturday's effort against TCU, a 34-30 loss, had any impact on the ongoing search to find a new football coach, KU athletic director Sheahon Zenger spoke highly of Bowen and what he has accomplished here in the past seven weeks.

“Clint is definitely a candidate for the job,” Zenger said. “And he continues to be a strong candidate.”

He better be a 'strong candidate'!

You are already wasting big money looking for a better coach!!

Give him a chance.

He has certainly already earned it!

Bowen has already been given an 8 game chance - and is doing quite well with it. It would be irresponsible for that to change before it was over.

If Bowen is not the top candidate, there's a problem. Bowen has proved he can get the most out of this team and that the players want to play for him. I'm not sure what more Zenger needs to see. He has won a game in the B12, is 5-1 against the spread and has put a big scare into the #5 ranked team in the country.

5-1 against the spread but 1-5 against opponents.

Bowen has a record he can win. Therefore he should be the top candidate. No more Charlie's----who just did not understand college football. Shall we start the season again? Zenger must open his eyes. There are too many candidates who make claims, but do not match. Lloyd Kinnison

What record? Definitely agree that the team seems to be getting better and better each week.

That being said, Coach Bowen does not have "a record he can win".

Zenger will hire Bowen in the end. Too much risk for not doing so. If Bowen wouldn't work out Zenger gets a pass. If he passes on Bowen and his hire is even so-so he might get some heat. If his hire is a total dud it'll be his undoing. I really don't see that he has much of a choice. But now he's gotta save face for going out and hiring a consultant while following the advice of many, protect KU. So, he'll be thorough but in the end I'd wager Bowen s got it. Surely our wealthy and powerful boosters see what we see, but if not that could be a problem.

Yep. I should have read your comment before posting below.

Until a deal to make Clint the new HC has actually been inked, saying he's a 'strong candidate' is about as far as Zenger can go. It's really a no-brainer, as the fans will almost universally support Clint as the choice. There's practically no downside for Zenger to go with him. If he decides to pass over Clint and picks another bomb, his own backside will be 'over-exposed.'

Especially when there are still 2 games left on the interim schedule. If the Jayhawks continue to progress as a team, then the decision is making itself. There will likely still be some time to review other candidates (something called due diligence, being responsible), but there will be fewer quality candidates interested.

The last 2 games will decide whether Coach Bowen is the next HC or not. It's a good thing Dr Z didn't choose a 6 game interim coaching position.

I agree, Dirk...if the team continues to improve in the last two games, the decision will make itself.

While we were out-manned but not out-fought against TCU...lets not let the emotions of one great effort cloud the final decision.

there shouldn't be any more looking. here he is RIGHT HERE. true we have not seen W'S but what we HAVE seen is improvement or at least I have. I have seen a team that looks like they deserve to be on the same field as other teams we play, improvement every week since Coach has taken over. I think he definitely has deserved the chance for the head coaching position let him get out and recruit and work with the guys and I think you will really see what Clint can do. the guys love playing for him, see his passion about the university I just think he IS the guy GO HAWKS

More thoughts from other places...

A quote from another news source: "Everything we’ve asked of him, he’s done,” KU athletic director Sheahon Zenger said.

A quote from another coach: "I think Kansas people deserve somebody like (Bowen),” said TCU coach Gary Patterson. “I think that’s the kind of people they have here. They want somebody that’s going to care about them, also be a good ball coach, be able to recruit, and do some things. I think coach Bowen and his staff have gotten kids to play. Unless they find somebody better out there … but to me, it would be hard to be any better than what they played today.”

Despite the powerful emotions and desire to name our head coach today this process needs to play out. Zenger knows this, and he will make the right decision.

I think Bowen's "audition" for the HC position continues to be a motivating factor for both Bowen and the players. No reason to award him the position during the season. That was the best KU football game I've seen in the last 5 years. I hope the last two are as much fun to watch.
This team was horrible before Bowen took over this year and his impact has been significant. I can't imagine a scenario where he does not get the job. Even the best possible (big name or on the rise) coach has serious risks to fail here. I've seen 30 years worth of coaches cycle through KU and this is the first time I see long term potential for sustained success.
Imagine if we took a chance on a KU guy and we ended up with a coach that spanned decades. Imagine if we were the stable football program in Kansas and the other team was cycling through coaches to replace Snyder. I think this a rare opportunity for KU football and any other direction will likely be more of the same.... not just just the last 5 years, but last 30 years.

The opportunity certainly is there that if KSU messes up replacing Bill Snyder, and KU lands a young head coach who loves KU enough to stay for 20+ years and is successful, KU could have a reign of dominance over KSU similar to what KSU has has done to KU since the early 90s.

Excellent post Bill, I love the strong emotions and opinions!! Bowen should be a slam dunk for Zenger. I saw players making plays yesterday that I haven't seen in a long long time. RCJH!! Okay Zenger time to make the right decision.