Self reacts to Larry Brown’s comments about UK going unbeaten

The Kansas University men's basketball team next will meet Kentucky at approximately 8:50 p.m., Tuesday at the Champions Classic in Indianapolis.

Earlier this week, SMU coach Larry Brown, who is mentor of both KU coach Bill Self and UK’s John Calipari, this week captured headlines when he said Kentucky’s ultra-deep team should go “45-0.”

Following Friday's 69-59 victory over UC Santa Barbara in his team's season opener, Self gave his thoughts on Brown's comment. 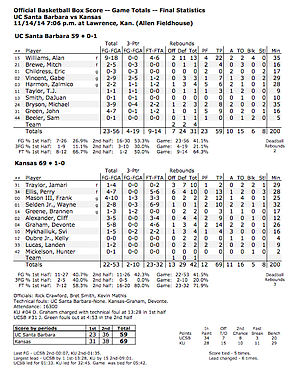 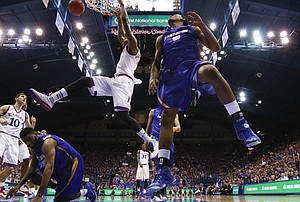 “Who knows what Larry is doing. He may be mad at Cal about something,” Self said with a smile. “But yeah, they’re probably a team, I haven’t seen them enough, but they’re a team that could obviously make a run like that. And they’ve got more veterans than what you think with some of their returning guys.

“I would say this: Every game they play they’re probably going to be favored. So, if you’re a favorite every game, the chances are probably pretty good you’re going to win. So they’re going to have a chance to be a team that could have an unbelievable record. I don’t know what philosophy there is, but the goal is to win the last game and sometimes it’s best to have that confidence and win a lot and sometimes it is best to go through some stuff where you have to kind of find yourself and grind through it. But they’re going to have a terrific record, that’s for sure.” 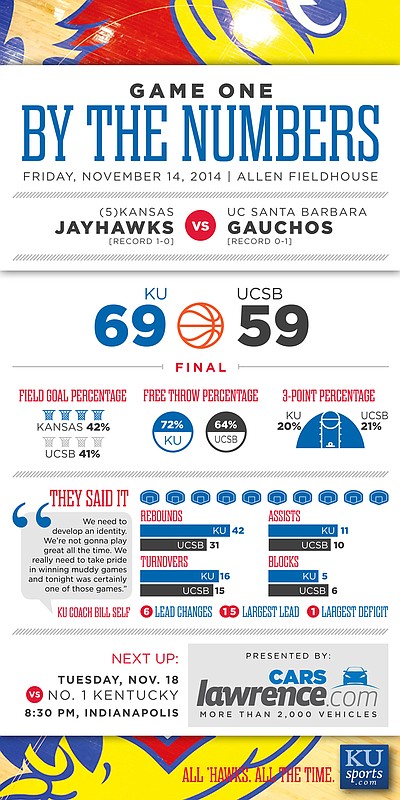 I think it's smart. I would inflate the egos of Kentucky the best I could.

Maybe I misread Brown's comment...I thought he was being facetious with 45-0, since no one plays 45 games...like, they're going to be so good, they'll have extra wins, above and beyond their schedule. Doesn't that sound more like a LB comment?

UK has a good shot at it but you can only play 5 players at a time no matter how deep you are and it takes just one bad night to end an undefeated season.

Kansas should just go ahead and take the pressure of an undefeated season off Kentucky's back very early in the season...out of friendship...

I hope KU embraces the underdog role for the game. It doesn't happen very often.

Coach forgot to mention Kentucky plays in the SEC, which will automatically pad their record. Well, I guess he was being diplomatic. :)

For one, they get to play Missouri, who last night lost to UMKC. At home.

Oh our guys will be "up" for KY, just like last year's ultra-green squad was "up" for Duke. We may not have the firepower or length to beat KY, but I think we will give KY their toughest test out of their whole season. I do want to see us fight just as hard as the last KU team (2012's TRob+TyshawnHawks) did...