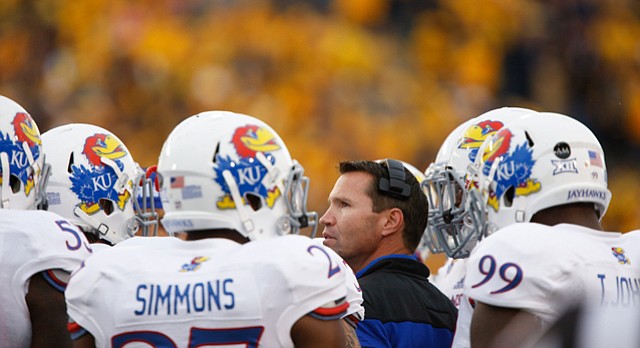 Kansas head coach Clint Bowen looks up at the scoreboard as he is surrounded by his defenders during the second quarter on Saturday, Oct. 4, 2014 at Milan Puskar Stadium in Morgantown, West Virginia.

With three games left in the 2014 Kansas University football season, including matchups against current Big 12 Conference co-leaders TCU and Kansas State, interim head coach Clint Bowen’s team has a lot more than just pride to play for down the stretch.

Technically, the program is still alive for a bowl berth, but it would need to win out to reach six, and even the most optimistic Jayhawks see that as an extreme long shot.

However, should the Jayhawks find a way to spring an upset in one of their final three games, that likely would play a huge role in the way the Big 12 race plays out. Despite that fact, Bowen said what’s happening at the top of the conference standings was the farthest thing from his team’s focus right now as the Jayhawks (3-6 overall, 1-5 Big 12) prepare for a visit from No. 5 TCU (8-1, 5-1) at 2 p.m. Saturday.

“We’re not in tune to the race at all,” Bowen said. “We’re into the world of controlling ourselves and our day-to-day preparation, and our focus around here is about the development of our players and our improvement and getting ready to play TCU to the best of our ability.”

That figures to be as tough as any test the Jayhawks have faced all season, but Bowen said Monday morning he hoped his team’s recent encounter with Baylor would help in this week’s preparation for TCU.

“They both are extremely athletic,” Bowen said of the two teams tied with Kansas State atop the Big 12 standings. “On the offensive side of the ball, they both have wide receivers that can really run, they both have really good tailbacks, the O-lines are good. They’re balanced offenses, and they have good players across the board.”

Two of those players are quarterbacks Trevone Boykin, of TCU, and Baylor’s Bryce Petty, and, although the two utilize different styles, the end result is often the same.

“Boykin obviously does a lot more with his feet (than) Petty,” Bowen said. “But both run their offense efficiently and spread you out and utilize tempo. They have that approach that they appear they’re genuinely trying to score on every play.”

A lot was made about whether KU fans acted properly in tearing down the goal post in the south end zone after last weekend’s victory over two-win Iowa State.

Bowen said Monday morning he had no problem with it.

“Obviously, we want to get to a point where winning games is expected and we don’t act that way,” Bowen said. “But the bottom line is, our program (has not) had much success lately. ... For someone to be able to feel good about Kansas football for a day, there was definitely nothing wrong with that.”

Speaking of long shots...has there been any talk about how recruiting has been going. The number 1 recruit Terry Beckner Jr. is from the same high school as Kyron Watson and Tony Pierson in East St. Louis. Any chance they will play a roll in pulling off one of the wildest recruiting commitments in college football?

I mentioned this same thing quite some time ago on here and a message board have heard nothing.... I think he is strongly considering Misery tho

Missouri has already received a verbal commitment from the RB (Natereace Strong) who also plays for E. St. Louis this season. The Jayhawks will be challenged for quite some time on the recruiting field. Heck, the Jayhawks have already had the 4 Star rated WR (Cory Butler) de-commit and re-committed again back to Utah. It will be interesting to see who ends up being named the Head Coach at Kansas. There are some assistant coaches that are crucial to keeping at Kansas for the future seasons (in order to not totally lose out on players that are currently committed. Otherwise, it'll be just like what has happened in the past coaching changes.