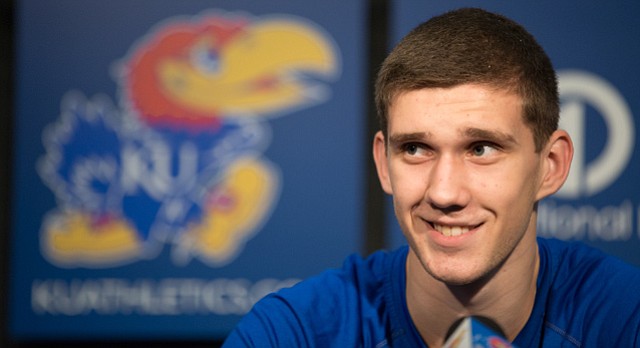 Self said as of Monday he’d likely open with the fivesome of Frank Mason, Mykhailiuk, Wayne Selden Jr., Perry Ellis and Jamari Traylor. For the first exhibition game, he went with Devonté Graham, Mason, Ellis, Selden and Traylor.

Self also said sophomore Brannen Greene, who suffered a concussion against Washburn last Monday, had “practiced the last two to three days and is good to go unless he were to get hit again.”

Asked if players had begun to separate themselves at practice, Self said: “Not yet. Svi has probably been as good as anybody in the last few days of practice. We haven’t had separation like I thought we would both inside and on the perimeter. You could make a case for Cliff (Alexander) in certain situations, Landen (Lucas) in certain situations. You know Jamari and Perry are going to play regardless. You can make a case for any of our six perimeter players being starters. I’d like to see a little more separation.”

Prior to the season I would have never guessed Svi would start over Greene and Oubre.

Cant say I saw that coming either. But then again we dont know how good Svi is, or what the starting lineups will be later in the season.

Svi, over the past year, has played against much older, better competition than both Greene and Oubre. I think his IQ is extremely high and he plays hard. That being said, I agree with you on the unlikeliness of him starting any games this season.

Totally agree but after watching Mykailiuk during the Washburn game, he's going to be tough to keep off the court. The guy has tons of game savvy.

Before Mykailiuk showed up, I thought KO would blow his socks off. Shows that he is a tough kid.

exactly! now is exactly the time to start Svi and see what we have.

For the preseason games, and who starts - It really depends on who practices better, plain and simple.

that's a pretty BOLD STATEMENT sayin you can't see him starting a regular season game. coach has repeatedly how talented he is don't ever say never

Couldn't agree more. Big fan of Svi's game. Seems like mostly negative comments on this thread, which I was surprised to see. Personally, I would prefer Svi in the game over Greene and I think he is the most exciting player on the roster.

I wouldn't say negative just optmistic is all

We have seen this before. Svi is looking good - better than expected - and our hopes are that he is a phenom who becomes our savior. When the season begins, however, reality kicks in and Svi will be lucky to play eight minutes per game. He is a "next year" type player. Glad to have him.

Ok, I get it. Your response here is completely logical.

But have you (or anyone) seen a player at Kansas in recent memory with this entire package? Height, quickness, shooting ability, length, ability to drive, ball handling, etc.? Sure, sure ... Svi starting next season makes perfect sense. Time to practice, assimilate, learn, mature, etc.

Robert, you are complaining about people overreacting by....overreacting. No one thinks Svi is going to be "our savior" because he's starting an exhibition game or even thinks KU needs any one player to be a savior. He's getting a look with some first team guys to see how he does. That's what exhibition games are for.

The 3 position is our definite weakness this year. Svi and Oubre are too inexperienced and lacking in some fundamentals. Greene has incredible talent but lacking in focus. It may be a revolving door at that position this year.

Weakness? Most teams in the country would love to have either of the three. By the time conference play comes around, it will one of our major strengths!

Coach will use the non-con season for lots of experimenting with the line-up - starters and subs, especially when there are lots of similar options to choose from.

Don't get too excited, remember Justin Wesley started in an exhibition game ahead of Thomas Robinson in TRob's last year here...that can be coach rewarding good practices, or simply trying to send a message to other guys that they need to work harder. Having said that, all the best to Svi, I'd love to see him be a real contributor this year, even if it is later in the season.

I am excited for Svi from the standpoint that he can finally show that he can play regardless of his age. I am pretty sure he has shown his teammates he belongs but now he gets to the fans tomorrow night. Rockchalk Jayhawk!!!

If Greene wasn't coming off concussion, I wonder if we're having this conversation. Greene put a ton of work in the offseason getting stronger and perfecting his shot. Self said its the most focused he's been since he arrived. Defense has been the Achilles but he held his own in the only sample we have this year.

Glad Svi is getting a start. Hopefully it tells us something. But I'm guessing Greene is the starter come regular season.

What a thread of posts. Quite amusing. What Svi starting actually means: