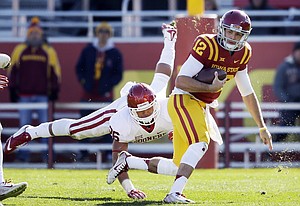 During the non-conference portion of Iowa State’s season, junior quarterback Sam B. Richardson completed 68 percent of his passes and had the ISU offense rolling. But those numbers have dipped in Big 12 play and Richardson has completed just 52 percent and tossed four of his six interceptions. If Richardson gets comfortable, KU could be in for a long afternoon, so it’s important for the Jayhawks’ defensive line to win the battles up front and for the secondary to give Richardson enough different looks to keep him from finding a rhythm. Richardson also is one of just eight players in the FBS to lead his team in rushing (339 yards on 96 carries) and passing (1,948 yards, 14 TDs), so it’s not just the passing game where Richardson could be dangerous.

KU must show up

During last year’s loss in freezing Ames, Iowa, the Jayhawks never got started in a 34-0 loss that was arguably the toughest to take in a long season. Two years ago in Lawrence, KU was run out of the stadium during the final three quarters, as Richardson and the Cyclones racked up 51 points and 548 yards on Senior Night. In both games, the Jayhawks hit the field flat and never recovered. Despite the record, this year’s Iowa State team is too tough for KU to survive that.

The KU running game got off to another good start this season but has really slowed of late. Today’s game against ISU presents a great opportunity for the Jayhawks to get rolling again. ISU opponents average 247 yards per game on the ground and a whopping 5.5 yards per rush. In addition, the Cyclones have surrendered 29 rushing touchdowns, including five last week to Oklahoma, which gained 510 yards on the ground.

Bibbs ranks second among all tight ends in the “power five” conferences with 34 receptions and is tied for first with six touchdown receptions. At 6-foot-3, 264 pounds, the athletic tight end is a matchup nightmare for opponents, who often struggle with the decision to put a bigger linebacker or a quicker defensive back on Bibbs. The Jayhawks figure to give safety Isaiah Johnson (6-1, 210) this tough assignment, and Johnson’s physicality, athleticism and speed should give Bibbs and Richardson something to think about when the Chicago native’s number is called in the passing game.

1 . You’ve become know for your monster beard, but is this the first time you’ve added long hair to the look?

“Yeah, I haven’t cut my hair since the last time I cut my beard, like August of 2013. I set my mind to it, and there’s nothing that could really happen that would make me cut it or shave it at this point. You just have to grow your hair out to understand.” 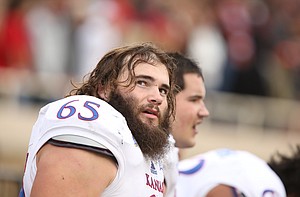 Kansas offensive lineman Mike Smithburg looks up at the score during the third quarter on Saturday, Oct. 18, 2014 at Jones AT&T Stadium in Lubbock, Texas.

2 . With that in mind, what’s the weirdest thing someone has said to you about your beard?

“Just random people, at least one or two every day, come up to me and say something about Grizzly Adams or Duck Dynasty or Jack Black, even. I get all kinds of stuff, just the random comments.”

3 . You grew up in Fairfield, Iowa, and played junior college football at Iowa Western. Does playing the Cyclones mean a little more?

4 . The O-line has been criticized a lot this year. Is it hard to hear that, and how do you handle the criticism?

“We’re kind of used to it by now. And really the only thing we can do is just to keep working and try to grind out a win. It sucks, but I gotta count my blessings, too. I’m still playing Div. I football.”

5 . How big would a win today be for the future of the program?

“Last year, when we were going into the West Virginia game (which KU won 31-19 in Lawrence), we were all kind of down, and when we won it just changed the outlook of everybody. It just changed the mentality and everything and really helped us get through the rest of the year with a little bit of confidence.”

The 2014 season has not gone the way anyone in the KU football program had hoped, but there’s no doubt the Jayhawks will hit the field against ISU expecting a victory. Last week’s loss at Baylor was the first time under interim head coach Clint Bowen that the Jayhawks looked truly overmatched, and Bowen and the players took the loss hard for 24 hours. After that, they responded with hard work and toughness. Like the Jayhawks, the Cyclones are winless in the Big 12 this season, and this game is big for the confidence of both teams as they head down the home stretch.

RE: You grew up in Fairfield, Iowa, and played junior college football at Iowa Western. Does playing the Cyclones mean a little more?

Where's Brett McCabe when you need him? He should let Smithburg know that there's nothing sentimental about guys devoted to beating our team.

He's a college kid, a couple years removed from his friends. Even professional athletes do this, after the game is over. Being able to tear it up on the field and then hang out after a game is a sign of maturity and resisting the urging of armchair athletes to hate all the time.

Ed, I feel EXACTLY the same...

Brett - it's fans like you that gave Perkins the support to get us where were at today.

Like it or not, Mangino is the greatest coach in KU history. Thats based strictly off of performance.

As soon as we finally have a football program going in the right direction and able to compete in this conference, we screw him over.

Maybe you should show a little respect for the guy that built great memories, for some of us that appreciated his time here.

He is? I guess that's not saying a whole lot. He had a couple of good years. What about the end of his last year? I see Mangino as a good coach but not a great coach. Not even close.

yeah, it's probably time for the Mangino nonsense to stop. Was he a great coach? A career .510 win percentage says probably not. Was he competent? Yup, absolutely. He led KU to one of the greatest seasons in its history and brought a little hope every time the season started we would go bowling.

A HC has a lot of responsibilities, and though they are ranked by Ws and Ls, the sad fact is that Mark Mangino, without question, and beyond anything reasonable, pushed it too far with his players. His discipline bordered on abuse, and for a University that wants to educate and grow young men, actions like that simply can't be tolerated.

I hate everything that's happened since MM left, but being absolutely horrendous in football doesn't mean the decision to let him go was wrong. What it means is the decisions made afterwards were mistakes.

It's tough and controversial, but you just can't treat amateur athletes and kids that way. You just can't.

It became way more difficult for Mangino to coach once the investigation started. That enabled the players to let loose with a sigh of relief and lose their edge. I believe Reesing to be a huge factor in Mangino's hot run, but he clearly had Kansas headed in right direction pre-Reesing. Post-Reesing? QB was pretty empty position so he would have needed to find a good one before winning again.

Guessing that Mangino's problem was playing an injured Reesing much of the year, without a chance to recover to 100%.