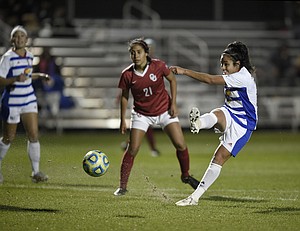 Kansas City, Mo. — For the second time in six days, the No. 14 Kansas University soccer team suffered a one-goal loss to Oklahoma.

After falling to the Sooners, 1-0, on Friday in their regular-season finale, the Jayhawks lost to Oklahoma, 2-1, Wednesday in the Big 12 Championship quarterfinals at Swope Soccer Village.

“We played way better today than when we played them Friday,” Kansas coach Mark Francis said. “We created a lot more chances, and we had a shot.”

The No. 6-seeded Sooners struck first against No. 3 seeded Kansas in the 35th minute, when Tori Bowman fired a shot past KU backup goalie Maddie Dobyns. The goal was the lone lowlight for Dobyns in the opening half, as she made all four of her saves in the first 30 minutes to keep the Jayhawks in it early.

“I thought Maddie played really, really well,” Francis said. “She made a really good save in the first half, big-time save off of a corner. I think a kid flicked it to the far post low, and she got down really quickly and tipped it around the post.”

Dobyns filled in for starter Kaitlyn Stroud, who received a red card in the closing seconds of Friday’s matchup against the Sooners.

The Jayhawks did not trail for long, however. Junior Liana Salazar scored the equalizer in the the 42nd minute on a free kick from less than 25 yards out.

“I think yesterday I took more than, like, 20 balls (free kicks), so that is the result of practice,” Salazar said.

Salazar had a chance in the opening minutes of the second half to put KU in front, but Oklahoma keeper Kaitlyn Fahrner was there to save the point-blank chance.

The Sooners went on to retake the lead in the 62nd minute when Madeline Brems blasted the ball past Dobyns to give OU a 2-1 advantage. Oklahoma capitalized on a corner by Abby Hodgen, and Jemma Cota set up Brems for the one-timer.

“I thought we defended the corners pretty well,” Francis said. “The first goal and the second goal came off of a set piece where we didn’t get to the second ball.”

Kansas had a golden opportunity to come level again in the 80th minute. Fahrner gambled by coming out of the box and was out of position when the ball bounced to the feet of Salazar again from 25 yards out. Salazar’s shot sailed wide, though, and the Sooners held off the Jayhawks.

Despite losing four of the last five games, Francis is confident about the Jayhawks’ chances at an NCAA Tournament berth with a 15-5 record.

“We’ve got some kids with some knocks,” Francis said. “We’ll regroup and get those guys healthy and figure out Monday who we’re playing and make a run in the tournament.”

The NCAA Tournament field will be announced at 3:30 p.m. on Monday, and the Jayhawks will host a watch party in the Chancellor’s Lounge of the Anderson Family Football Complex.