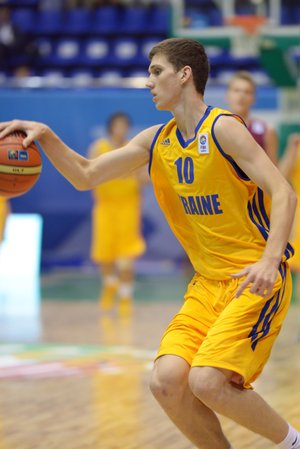 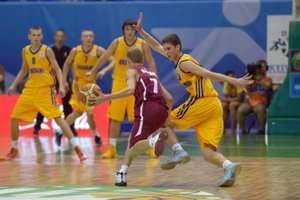 Sviatoslav Mykhailiuk, who this fall will become one of the youngest (if not the youngest) college basketball players in history, is apparently more than ready for the challenge of big-time hoops.

So says Kansas University coach Bill Self, who on Wednesday announced the signing of the 6-foot-8 combo guard/small forward from Cherkasy, Ukraine, to a national letter of intent.

“Obviously, this is great news for us,” Self said. “He is 16 years old and will turn 17 in June (the 10th), but his skill level, knowledge and aptitude for the game are way beyond his years. I think that he will be an immediate impact guy.

“He is a guy that can play all three positions on the perimeter. At 6-8, he can play point, play the No. 2 (shooting guard) or the No. 3 (small forward). He allows us to be more versatile next year, and certainly there would be few people that would shoot it better than him.”

Mykhailiuk, whose name is pronounced “Sviat-is-slov Meh-kai-luke” (he prefers to be called Svi, pronounced Svee), already has completed school in Ukraine, which would keep him at KU for a minimum of two years because of the NBA Draft’s age-requirement rules.

He played for the Cherkasy Monkeys of the Ukrainian Superleague last season but according to draftexpress.com’s Jonathan Givony never signed a contract, thus would qualify under NCAA amateurism guidelines.

“We got a lot better today,” Self said. “He’s not here yet, and he won’t come until the fall because he’s going to stay back and play with his national team this summer, which we strongly encourage. He’s a young man who will be so exciting to watch his growth because of his age, his intellect and his ‘want to.’ This guy really wants to be a player and really wants to do it here in the States.”

Mykhailiuk averaged 25.2 points and 8.0 rebounds a game while representing Ukraine at the 2013 Under 16 European Championship. He hit 28 percent of his threes, went 77 percent from the free-throw line and was named to the all-tournament team.

“He’s extremely talented and can really shoot it,” an NBA executive told ESPN.com, comparing Mykhailiuk to former Michigan standout Nik Stauskas. He also has been compared to the San Antonio Spurs’ Manu Ginobili. “He has to get stronger, but he can make a play with the ball in his hands. He gets bumped off his route right now,” the NBA source said.

Another NBA scout told CBSsports.com: “He’s a shooter with athleticism that can dribble and pass.”

ESPN’s Fran Fraschilla said if Mykhailiuk played high school ball in the U.S. next season, he’d be a top-10 player in the recruiting Class of 2015. Self watched

Mykhailiuk at the Nike Hoop Summit in April. Mykhailiuk made an official recruiting visit to KU and runner-up Virginia two weeks ago. He also heard from Iowa State and Oregon and received offers from several European teams.

“I liked everything (about KU),” Mykhailiuk said. “From the history, the strength program and especially the coaches … everything. It’s Kansas. KU has players every year. Coach Self has had so many players go to the NBA. That’s an important thing.”

Mykhailiuk joins a recruiting class that includes Rivals.com’s No. 4-ranked player Cliff Alexander, No. 6 Kelly Oubre and No. 36 Devonté Graham. KU has one scholarship remaining in recruiting.

“Who knows what will end up happening with Andrew (Wiggins) and Joel (Embiid), but right now the consensus is that they will be two of the top-three players taken in the NBA Draft,” Self said of a pair of one-and-done KU players. “How do you replace guys like that? The answer is, you don’t. The way you try, though, is to go out and sign Cliff, Kelly, Devonté and now you add Sviatoslav to the mix. This could arguably be one of the very best recruiting classes that we’ve had. I think of last year’s class and I think of the class with Brandon (Rush), Mario (Chalmers) and Julian (Wright) — this class definitely rivals that.”

This, that: Mykhailiuk played opposite future teammates Oubre and Alexander in the World Select Team’s loss to Team USA at the Nike Hoops Summit. Mykhailiuk scored two points off 1-of-4 shooting (0-for-3 from three) with two turnovers and a steal while playing 13 minutes. He was the youngest player in that game. ... The son of mother Inna, a high school biology teacher, and father Iurri, a college history professor, Mykhailiuk has taken English classes for much of his life and speaks English fluently. ... Draftexpress.com lists Mykhailiuk as 6-foot-6 in shoes, citing a Nike Hoops Summit measurement.

Fran says: ESPN’s Fraschilla said this about Mykhailiuk in a blog at ESPN.com: “He shouldn’t be characterized as a point guard or shooting guard because he is multiskilled and can play either position, and he showed that during the World Team practices. ... He handles the ball well for his size and has a better-than-average feel for the game as a playmaker. ... Though he will turn only 17 in June, Mykhailiuk is well put-together physically for a young player. ... Initially, I see Bill Self using Mykhailiuk off the ball where he won’t have the pressure of running a team. As he grows more comfortable in the Kansas system, he will be entrusted to have the ball in his hands more.”

Sasha a hero: Mykhailiuk was impressed that KU’s Self coached Sasha Kaun, a native of Tomsk, Russia, at KU. Contacted by the Journal-World, Kaun, who plays pro ball for powerhouse CSKA Moscow, said he’d yet to meet Mykhailiuk.

Welcome to the family, Mykhailiuk! Spread your wings, soar as high as you can. It'll be tougher and tougher to get minutes with the loads that KU has now.

This is a great addition to Kansas basketball. Yes, I would agree with coach, today we got a lot better. We just become a serious contender to win the National Championship.

Even if he does not get on a strength program and high calorie diet, he will get stronger. He is only 16!!!!!

AWIII may not have made a list yet, but he should probably go ahead and take Nebraska and Miami off of it and FSU too while he's at it. Maryland, Richmond, ND, Wake is a pretty solid list.

Personally I'd like to see him at Wake helping Danny to rebuild a proud program, but I wouldn't blame him at all for choosing Richmond.

Maryland and ND are both interesting choices. Academics are improtant to him and Notre Dame has a lot of offer, as well as playing in the ACC, and he's said that proximity to home is not a factor. Maryland is also close to home and a once proud program that needs some help, but it's easy to picture Maryland struggling in it's transition to the B1G for the next few years.

I think you're right, Andrew had a close connection with one of the assistant coaches now at Nebraska and he will get plenty of playing time in the Big Ten.

Hopefully, he can find his shot consistently and make a name for himself. I will not be surprised if he makes it to the first or second team All Big Ten Players of the Year before his college career is over.

Quite frankly, I see Svia making a lot less impact than everybody is predicting...and that is not necessarily a bad thing.

Based on his youthful age, his yet to developed body, playing in a new country, just being a freshman, being exposed to the expectations of college basketball's signature program, playing with and against elite talent-some of it three and four years older, college studies....need I go on??

So let's give the kid a break and don't expect the new Manu Ginobli just yet.

He will take us to the title this year and be the MOP of the final four baby! All jokes aside I agree that he may not get a lot of minutes this year. He is just turning 17 and needs to get stronger. I see this year more as a growth year for him while he develops his game. The NBA is looking to raise the age limit to 20 by the 2016 draft so we should have him for 3 years and long term that will help him since he is so young. We have the wings with Oubre, Selden, Greene and even Frankamp so we have depth there. Let's just welcome him in and let our young Russian Assassin learn this next year.

Based on the political climate, I would suggest "The Ukranian Assassin", but otherwise, point on.

Really, the most obvious nickname would be the "Assassin of the Former Union of Soviet Socialist Republics." Duh! (Spoken in your finest Yakov Smirnoff accent) How am I the first to come up with that one?????

If we are going to use Cold War nicknames then I would go with Warsaw Pact Assassin.

Personally, I hope his nickname is associated with his ability to hit the three. How about the Svee Tre?

What popped into my head is how Dr. Naismith's simple little game has "spanned the globe" to briing this teenager to the very birthplace of the sport. The fact that a kid can develop the skills and passion over the last few years for a game that was invented in Lawrence, Kansas while coming from the Ukraine with it's social/political landscape, is incredible.

Just for clarity sake, the game wasn't invented in Lawrence. It was honed there and the father of college basket ball coaching rose from there, but have to give Springfield, MA the credit it is due.

Martin may I suggest this book - James Naismith: The Man Who Invented Basketball by Rob Rains. A easy insightful read. It is a very nice history of Dr. Naismith and basketball, a lot of his views and words. I learned that very early after its invention Woman were playing it too, which when you think of Woman's rights at that time I find very interesting. Basketball was accepted for women at a time when voting was not. The 19th Amendment was not ratified till 1920 a good 25 years after the game was invented.

The Cherkasy Monkeys? There's a mascot that will never be used in the NBA! 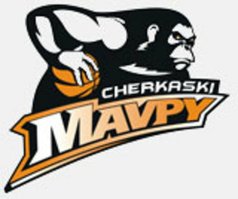 Still better than the Pelicans!

Ha Ha! How 'bout the Chimps?

Now there's a logo for the Pittsburg State Gorillas!!!!!!

Bill Self has become the global guru of basketball recruiting. Canada, Cameroon and now the Ukraine. All elite athletes! High character kids that will become stars and hopefully bring us that 4th NCAA banner.

Since he's only 16 at the moment, he very well could end up getting to 6-8. People can keep getting taller until around 20 so he may not be done yet.

Any chance that Svia would receive a national ranking at some point?

That's the most relevant question you have? ... Class dismissed.