Top NBA draft prospect Andrew Wiggins of Kansas prepares for an interview during the NBA draft lottery in New York, Tuesday, May 20, 2014. 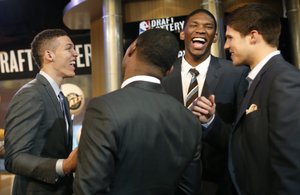 NBA draft prospects Aaron Gordon of Arizona, left, Marcus Smart of Oklahoma Sate (back to camera) Joel Embiid of Kansas, and Doug McDermott of Creighton chat in the studio before the NBA basketball draft lottery in New York, Tuesday, May 20, 2014.

Barring some big surprise, Kansas University’s Andrew Wiggins and Joel Embiid will be playing basketball in either Cleveland, Milwaukee or Philadelphia next season.

The NBA Draft Lottery revealed Tuesday that the Cavaliers will pick No. 1, the Bucks No. 2 and the Sixers No. 3. Wiggins and Embiid have long been considered locks to fall somewhere in the top three with Duke’s Jabari Parker.

“It’s competition, but it’s friendly competition. We both have love for each other,” Wiggins said, referring to himself and Jayhawk teammate Embiid on the live lottery telecast on ESPN.

“If I don’t go No. 1, I hope he goes No. 1. We’re all just a family here. We both hope to get No. 1 pick. Hopefully wherever we go we do a lot of damage wherever we are at and have a successful career,” Wiggins added.

ESPN’s Chad Ford tweeted on Tuesday that the 6-foot-8 Wiggins “is odds on favorite to go No. 1 to Cavs.” ESPN’s Jeff Goodman, in somewhat of a surprise, has the Cavs taking Parker, the Bucks Embiid and the Sixers Wiggins.

Goodman also tweeted, “Milwaukee may be in a tough spot. Arn Tellem (Embiid agent) may not let Embiid work out for Bucks — do you take him at No. 2 w/o all medical info?”

Embiid, who missed the Big 12 and NCAA tournaments because of a stress fracture in his back, on Tuesday said he’s fine.

“(My back) is 100 percent; no pain, nothing. I have been working out just to get back in shape,” Embiid said on Sirius XM radio as quoted by A. Sherrod Blakely of Comcast Sports Net.

Embiid was asked on ESPN’s lottery telecast what he could bring to the Cavaliers at No. 1.

“I can bring my shot blocking ability. I think I have a good offensive game and I’ll be able to get rebounds like I did in college and it will be fun,” Embiid said.

Wiggins was asked on the lottery show to tell his fellow top prospects in attendance why he should be No. 1.

“It’s just being a competitor. You never want to put anyone else ahead of you,” he said. “So I’m always going to put myself first above anybody. Just the competitive side of me. I think I can do a lot of damage in the NBA. It’s more open court. That’s more my game, more one-on-one, open spaces. I think I’ll do pretty well.”

As far as other prognosticators, draftexpress.com on Tuesday predicted Wiggins will go No. 1, Parker No. 2 and Embiid No. 3. NBAdraft.net has Embiid No. 1, Wiggins No. 2 and Parker No. 3. 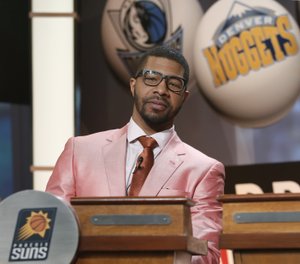 KU represented: The live lottery show had a Jayhawk flavor. Embiid and Wiggins were the only two players interviewed. Also, former KU forward Markieff Morris, who attended with twin teammate Marcus, was the Phoenix Suns’ representative, and former KU guard Milt Newton was the representative of the Minnesota Timberwolves.

Tweets: Embiid took to Twitter after the draft lottery show and wrote: “It’s been a long day... Time to rest!! This process is getting interesting.”

Lots of pub: Wiggins appeared on NBA.com’s “Off the Court” show with Rick Fox on Tuesday.

“Something that prepared me for this moment is Kansas because they really treat the basketball players, the basketball team like celebrities out there,” Wiggins said. “They show a lot of love and support toward them. I did so many interviews in Kansas, a lot of autograph signing. We always were on the big stage in Kansas. I think that will prepare me for times like this,” Wiggins added.

Charlie B. Gonesoon 7 years, 2 months ago

I'm a little confused with Embiid's agent. First he convinces him to leave college ball early but then he doesn't want him to work out for certain NBA teams. Hope this guy doesn't screw it up where Joel drops lower than 3rd.

I don't think Embiid's agent convinced him to leave college early. That would be an NCAA violation since he can't have contact with an agent until after he declares. He's only letting Embiid meet with certain teams so that he can keep the doctor opinions to a minimum. Out of 30 teams, there's bound to be a few team doctors that disagree with his prognosis in the hope that he'll fall to them. If he doesn't want Embiid working out for the Bucks then it's most likely due to the fact that he doesn't see the Bucks as being a good team down the road and he'd rather have Embiid on a team that has potential.

If Joel drops below 3 it will be his back. I could not even mess this one up. The only question about him at all is his back. Otherwise, he is head a shoulders the No.1 pick.

Given the high interest Cleveland has to resign James couple with All-Star point guard Kyrie Irving, I have to conclude Embiid will be there selection.

Regardless of who selects Wiggins, my bet is he ends up at Toronto, where there is great fan interest, similar to Cleveland with James. Better than even odds Milwaukee trades the #2 pick to Toronto on draft day after CLE picks Embiid.

No way Milwaukee trades the No. 2 pick and definitely no way they trade it to Toronto.

Milwaukee has been horrible and is desperate for a big name that can generate buzz. Toronto already has good things going for it and probably won't have the resources to acquire the pick from Milwaukee after it finds a way to resign Kyle Lowry. If Toronto doesn't sign Lowry, then they'll be in desperate need for a PG, which this draft class does not have an abundance of worth taking at No 2. Maybe they trade down to get Marcus Smart or Tyler Ennis. But no way they trade down to take Embiid or Wiggins, when they are already solid at the SG and C positions.

Wiggins #1 to Cleveland; Embiid #2 to Milwaukee. Cleveland needs a player at Wiggins' position more than it needs a center and they are desperate to have another star on the roster to lure James. They will fail to get James no matter who they pick but they'll die trying.

Wiggins will be an NBA All Star in the next three years.

Cleveland is good at screwing up. Bet they take Jabari Parker.

If Cleveland takes Andrew they would be filling the position Lebron plays so they would nix any chance of hiring him. Or they could put andrew at the 2. Starting Kyrie at the point, Andrew at the guard and Lebron at the 3.

How does Cleveland keep landing the first pick? That’s 3 in 4 years. They had a 1.7% chance of getting that pick. I call B.S.

There’s going to be a documentary uncovering all the shady happenings behind the NBA’s doors someday. I can’t wait.

Maybe it’ll be a Hollywood joint. Dustin Hoffman could be Stern, Malkovich could be Silver. Hmm. Who would be Sterling?

1] Ironic that the three worst teams in the draft play in three of the country's uglier cities. Note - Detroit is in a class all by itself, "post-apocalyptic".

2] Whoever is Markieff's fashion consultant , they should be flogged.

3] The hidden marketing treasure in this draft is McDermott...a white guy who can actually play in the LEAGUE!! [Simple economics... supply and demand].

4] If you are an NBA GM, what parts of the words "back" and "fracture" shouldn't make you hesitate just a bit??

5] I agree with Suzi.....not now, not next season, but sooner or later, Toronto will end up with the most famous Canadien basketball player in their history.[Well..next to Doc Naismith but he didn't really play, did he. :) ]

6] Many "thank yous" to Andrew for his praise and totally factual evaluation of the "Kansas Experience". Something tells me lots and lots of prospects saw his comments. The constant attention and intense interest does prepare you for the next step.

7] Pretty hilarious that a bunch of draft experts couldn't agree on the same order. My take..Cleveland will want to screw up as usual and take Parker but the pressure will be so great, they will be forced to take Wiggins thus making the right move; Milwaukee will see visions of Jo Jo as Kareem Abdul Jabbar Junior thus welcoming him to Laverne and Shirley's Hometown; Philly will thus get a damn good consolation prize in Parker.

8] Each top guy has a red flag...Andrew's inconsistent aggressiveness....Jo Jo's back....Jabari's being a Duke butthead :) !

4] Who wouldn't want to sign a player that would literally break his back trying to help his team win.

I wouldn't ordain Wiggins as the greatest player out of Canada yet. Steve Nash has been pretty good.

There's no way Cleveland takes Parker and gives up on Anthony Bennett after one season. Barring a trade, it's going to be Wiggins, Embiid, and Parker in that order.

I hope bucks get wiggins and that their starting lineup of Brandon Knight Gainnis Antekutempo Andrew Wiggins John Henson Larry Sanders dominates in the future.

I know this wouldn't work to our advantage as far as publicity goes, but I would rather Wiggins and Embiid go to the Celtics and Lakers at 6 and 7. But, the Cavs and Bucks would most definitely start them right away, I just can't see myself watching them or seriously rooting for those teams. Pierce made me love the Celtics and I lived in Cali for 3 years so the Lakers grew on me. That's my selfish opinion though. Either way, I'm loving the attention KU is getting. Btw, who's Myles Turner? Yea, that's what we'll be thinking next year. Big mistake buddy!

Am sure this has been asked and answered previously, but when was the last time, if ever, that two players from the same school went 1-2 in the NBA draft?

Sviatoslav Mykhailiuk to KU. Self has already commented and thus he must have signed the LOI.