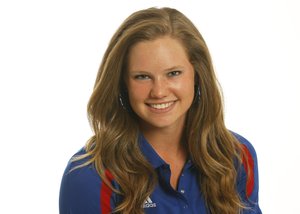 An exercise-science major who hopes to start dental school in the fall of 2015, Meghan Potee has had a stellar academic career at Kansas University.

Normally, her accomplishments would be recognized Sunday during KU commencement ceremonies in Memorial Stadium.

Potee has another engagement, however.

She culminates four years of collegiate golf with a spot in the NCAA Championships.

Sunday is the first of two practice rounds at Tulsa Country Club, with the 24-team, four-round tournament running Tuesday through Friday.

“You work four or five years to graduate and miss the celebration ... that’s OK,” said Potee, who finished in a tie for 66th at last week’s NCAA Central Regional at Karsten Creek in Stillwater, Oklahoma. Her final-round 74 proved instrumental in the Jayhawks’ tying for fifth in a tourney in which the top eight (of 24) teams advanced to nationals.

“Some of our friends are being really cool and want to come take pictures with us by the Campanile sometime this week before we leave,” Potee explained. “They are going to get all dressed up in our cap and gowns and take pictures with us. We’ll have a little celebration. We just won’t get to do the huge thing with the whole school, but going to nationals is kind of worth missing graduation for. I know a lot of people skip graduation anyway. It was kind of a big deal to us, but I think nationals is a little bigger.”

This KU team is just the second in school history to compete in the NCAA finals. The 1990 team advanced when it was an automatic qualifier after winning the Big Eight title.

The Jayhawks had some scary moments last week at regionals. In fact, KU was in 10th after two rounds, improving five spots the final day. Junior Minami Levonowich shot a 1-over-par 73 in the final round and led the Jayhawks with a 19th-place tie. Sophomore Yupaporn Kawinpakorn tied for 24th, while senior Thanuttra Boonraksasat tied for 45th, and freshman Pornvipa Sakdee tied for 51st.

“There were scoreboards on the course,” Potee said. “As I was playing, I noticed we got up to sixth place. I was like, ‘This is pretty good.’ I finished, and we dropped down to 12th. I was like, ‘This isn’t very good,’ but there were still four teams that hadn’t teed off yet. We were a little worried we were going to be in a playoff. We were pretty happy we weren’t. It would have been a little intimidating, a little scary, but it would have been fun at the same time. We were really excited (when final scores were posted).”

Potee had a somewhat emotional day. For a while, it looked as if she would be competing for the Jayhawks for the final time.

“I struggled the first two rounds,” said Potee, who shot 79 and 80. “I wanted to post one good round. I had a feeling, ‘This is going to be my last tournament ever.’ I don’t plan on continuing golf after this year. My dad got a little emotional afterward. He saw we were in 12th. He was like, all right, he’s probably never going to get to watch me play again. I was really excited to finish with a solid round. I started off a little rough with two three-putts in a row. I was like, ‘All right, let’s not make this another round like the last two.’ I was pretty proud of myself to finish like that. Whether it was going to be my last round or not, it was exciting to post that score.”

She said it was a true team effort.

“It worked out there were a couple bad rounds in there (one a day). The other four played well enough to cover up the bad,” Potee said. “That’s what playing for a team is, helping everybody out. I think we did a good job of that.”

Also being a team is celebrating individual accomplishments, like the graduations of Potee and fellow senior Boonraksasat.

“They are disappointed, obviously. You can’t blame them for that,” coach Erin O’Neil said. “That is a pretty special tradition. I think they are planning on putting on their cap and gown and heading over to the Campanile and getting a picture over there anyway. We’ll probably do a little something for them while we’re there at the championship. It’s a nice tradition they are missing out on but for a very good reason. I’m sure they are happy that we’ll be there.”