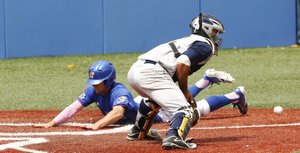 Kansas' Michael Suiter successfully slides into home to score a run against West Virginia on Saturday, May 10, 2014, at Hoglund Ballpark. 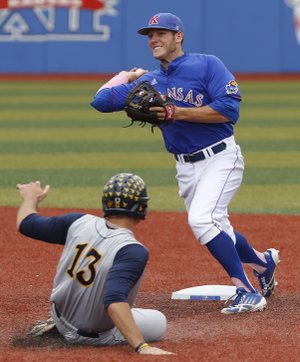 Kansas' Colby Wright (24) makes the force on West Virginia's Ryan McBroom and looks to turn two on Saturday, May 10, 2014, at Hoglund Ballpark.

Dakota Smith tries to avoid putting extra pressure on himself when stepping to the plate in RBI situations with two outs.

“I think I’ve learned to make it become just another at-bat and not try to over-stress myself out,” Smith, Kansas University’s junior right fielder from Leavenworth, said after bashing a two-out, two-run double in the third inning and two-out RBI single in the fifth in Saturday’s 5-2 baseball victory over West Virginia at Hoglund Ballpark.

“Hopefully (I can) just drive the ball where someone is not. It’s been working out lately,” added Smith, whose three RBIs came in support of Robert Kahana, who improved his record to 4-5 after allowing two runs off six hits in 61⁄3 innings.

“We got the lead early. After that, it was a lot of Robert getting the job done,” noted Smith, who had three hits in four at-bats.

Kahana, a junior from Ewa Beach, Hawaii, struck out one and didn’t walk anybody, though he did plunk three hitters. Three double plays took care of any possible damage. Drew Morovick didn’t allow a hit in 1 2/3 innings, and Stephen Villines gave up one hit that didn’t come around to score in the ninth as KU improved to 32-21 overall and 14-9 in the Big 12.

The Jayhawks have won eight straight league games for the first time since 1978, when KU won nine in a row in the Big Eight.

“Our team is playing really well. The talk in the locker room ... everyone’s up. We’re ready to play. Everything’s going our way right now,” Kahana said.

The Jayhawks grabbed a 1-0 lead over West Virginia (27-19, 9-10) in the second when Smith, who had singled, scored off an RBI groundout by catcher Ka’iana Eldredge. Smith’s double made it 3-0 in the third and single made it 4-1 in the fifth.

Both teams plated a run in the seventh. KU’s Tucker Tharp drew a bases-loaded walk for an RBI.

“It seems like when you are going good, you find a way to get two-out RBIs,” KU coach Ritch Price said. “Guys find a way to put the ball in play with runners at third and less than two outs. Dakota Smith had a huge day. Yesterday was Tucker Tharp and Connor McKay and Michael Suiter (in 5-3 win on Friday). Different guy, different game.”

Of the eight-game Big 12 winning streak, Price noted: “First off, it goes back to having the right mentality in your dugout, that you come out here and compete every day and you grind. When you play 56 times, you’ve got to play through the peaks and valleys and face the adversity you are going to handle through the course of the journey. If you love to play, at the end of the season, you get a chance to do something special (play in NCAAs). We’ve gotten better each month. We obviously are playing our best baseball of the year.”

Today, KU will send senior Frank Duncan (6-2, 2.02 ERA) to the mound on Senior Day in the series finale, which has been moved up an hour to a noon start.

really proud of the guys,keep u the good work and I know you will make us proud. everything seems like it is really coming together for you. good luck in the BIG 12 tourney guys and then the NCAA'S

Great work by the team! SO close to taking over TCU—amazing they had their winning streak snapped by OU.

KU isn't going to overtake TCU. They may officially be 1.5 games back, but might as well be 3 games back since TCU has 6 losses to KU's 9. KU only has 1 Big 12 game left while TCU has 4 left so KU could theoretically pass TCU if KU wins today and TCU loses out, but that's not likely so KU is probably going to finish 3rd this year.

Aaron beat me to it. What we have is 3rd place near locked up due to being the first team in the 'clubhouse'. We play Michigan next weekend.

To be a bit more analytical, for KU to finish in 2nd, to start KU won have to win today and TCU would have to lose. That's not particularly out of the question though, because the same thing happened yesterday (and Friday for KU). Where the chances start to align with the snowballs is that TCU would also have to be swept by Baylor (13 L's in the Big12) next week. That's real unlikely. KU also loses the tie breaker with TCU via going 1-2 with them.

The more important factor is to win today and eliminate the chance of falling into ties with 3 teams, including WVU, that currently have 10 L's. Take care of business guys. Rock Chalk.

Thanks Aaron, was going to say that as well. Only way we get 2nd is if TCU loses all four conference games left and we win today. Can only tie Okla State for 1st if they lose out, but they have tie breaker.

However we do have 3rd clinched. Even a loss today would give us ten losses, and three others already have ten losses, and we have tie breakers over all three. In addition, WV & Tech play next weekend, so one of them, and likely both, will have more than ten losses.

Want to see us continue to finish strong today & next weekend against Michigan, have a good showing in OKC, and make the NCAA field. Rock Chalk!!

Excellent points to all—I guess I should have been more precise in my comment and said ... "They were so close to taking over TCU... " I wasn't expecting the Jayhawks to overtake them, because of the Loss record and the games that are remaining on their and our schedules. All-in-all, it's been a great run to finish third and six spots higher than voters gave them credit for at the beginning of the season and a giving themselves a chance at post-season play.

It's just great to read an article on baseball getting some attention in the comments section :)