Kansas University will start its sixth different quarterback in six seasons this fall when Montell Cozart steps under center. 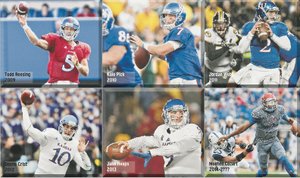 Kansas University will start its sixth different quarterback in six seasons this fall when Montell Cozart steps under center.

All those factors have played a part in the Kansas University football program getting trapped in the Big 12 cellar for five seasons running. Worse, KU has lost 40 of its last 42 Big 12 games.

No factor has played a bigger role in the cellar-dwelling than a failure to recruit the right quarterback, develop him the right way and put him in the right offense.

No other Big 12 program has come close to showing as much instability at the quarterback position as Kansas.

Montell Cozart, who beat out Jake Heaps for the starting job during spring football, has a chance to change that. He has three seasons of eligibility remaining. If he produces, he could stop the revolving door from spinning. If he does not, the search continues.

KU coach Charlie Weis announced a few days after the spring football game that Cozart will get the start, a nice confidence jolt for him. Cozart is set to become the sixth Week One starter in six seasons, following Todd Reesing, Kale Pick, Jordan Webb, Dayne Crist and Jake Heaps.

During that stretch, no other school can claim more than four Week One starters, provided nothing changes in terms of the 2014 projected starters.

Cozart is by far the least-experienced passer among the 10 projected Big 12 starters. He attempted 63 passes during his true freshman season.

Trevor Knight, who as a red-shirt freshman threw four touchdown passes to lead Oklahoma to an upset victory against Alabama in the Sugar Bowl in January, is the least experienced outside of Cozart. Knight attempted 134 passes.

Half of the projected starting quarterbacks in the Big 12 also started the season-opener a year ago. Baylor’s Bryce Petty, Kansas State’s Jake Waters, Oklahoma State’s J.W. Walsh and David Ash of Texas join Knight in that regard.

Cozart’s mobility makes a better fit for playing behind an inexperienced offensive line and for running a spread offense that gives a speedy QB like Cozart room to make things happen on scripted runs and scrambles.

Montell Cozart is set to become Kansas University’s sixth Week 1 starting quarterback in six seasons. A look at Big 12, season-opening starters the past six seasons, with number of different starters in parentheses:

Keegan this comment is just to remind you that your editorial on Naadir Tharpe was stupid.

Why are we afraid to refer to Keegan's article as racist? "Stupid" is a euphemism compared to the bigoted crap that comes Keegan. I'm not getting over racist idiots until they cease to exist and Keegan apologists that insist on posting on this board are just ask guilty as Keegan by standing by and doing nothing.

Stop the stupid race baiting crap. If that's all you have, you have no room calling anyone else a bigot.

Maybe you should mention that, after Reesing, the next four QBs were not very good, period.

An exceptional QB can take an inferior team and, at least, make them somewhat competitive. Our guys, and trust me I know they all tried their best, just were not good enough and we stayed pretty much where we belonged.....in the basement.

Maybe we are looking at this alignment thing all wrong!!! Who wouldn't want a school that was a virtual guaranteed victory every year on your schedule!! KU could be the Chicago Circle of Division 1 football!!!

PS What Jeffrey said goes for me too.

3-40 if you count KU's win over Iowa State in 2009 - the last victory of that season for Kansas, Reesing, and Mangino.

so are the rumors regarding Heaps Transfer accurate?

I want what you're drinking.

Al Sharpton? Is that you?

Uh...no. If you see racism here, it is because you want to.

three strikes, you're out.

I think Keegan's point is that Kansas would be better off if we had less talent at the QB position. I think that position runs counterintuitive to HCCW and most intelligent and progressive football minds. But to be totally fair, I have never heard Keegan described as intelligent or progressive.

It is beyond me how anyone can see racism in this article. Try sticking with education folks, not race baiting 101. Race baiting 101 is racist all by itself. Look in the mirror next time.

Lets not forget why KU ended up where they are. Perkins and Turner Gile ruined the KU football program period. Turner was a very good coach in the small divisions ll Buffalo but not in the division 1 Big 12 football. He had no clue how to control his players on or off the field. Look how long it took KST to get into the win column !! MR Bill S did not just show up and the wins & bowl games came a calling either. Be a great fan and show up and stay the whole game. That in its self would make the team feel good win or lose.

Perkins cost us dearly. Had it not been for him, just think of where we could be today. I am not sold on Weis, it seems like he has shuffled the deck every year when something hasn't worked immediately. Weis would have to win 10 games this season to match what Snyder did at K-State in his first 3 years. Which program was in a worse situation? K-State in 1989 or KU in 2011? Obviously K-State in '89. C'mon Weis show us something this year!

It almost looks like the picture above shows 6 different QBs with 6 different helmets??!!!

I think that's the secret...find one uniform, stick with it and we will return to football glory.