Parting ways: Tharpe leaving KU to be closer to daughter 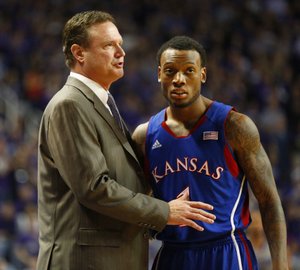 Kansas head coach Bill Self talks with guard Naadir Tharpe during a break in action against Kansas State on Tuesday, Jan. 22, 2013 at Bramlage Coliseum.

Kansas University junior Naadir Tharpe — who was on top of the college basketball world after being named national player of the week Jan. 21 after scoring 44 points in victories over Iowa State and Oklahoma State, and at rock bottom after a risqué photo surfaced on Twitter nine weeks later — is no longer a member of the Jayhawk team.

Tharpe and KU coach Bill Self announced Thursday, via news release, that the 5-foot-11 starter would transfer to a school closer to his Worcester, Massachusetts, home and his 2-year-old daughter, Amara Grace, who has not been in good health.

“Naadir and I have talked numerous times since he’s been here about his role and about his situation back home with his daughter,” Self said. “He’s told me many times how much he misses his little girl, and she’s had some health issues that has certainly made it difficult for him to be away from her for this extended period of time. She’s doing very well now, but Naadir approached me after the season was over about him wanting to be closer to her. This is his decision to try and accomplish that.”

Amara Grace was born in January of his freshman season.

“Due to extenuating circumstances within my personal life, I will no longer be attending the University of Kansas,” Tharpe said. “My daughter has current medical issues that require weekly visits to her physician, as well as with a specialist. At this juncture, I feel it is best to be closer to home where I can assist and support in any way necessary.

“I enjoyed my time here,” Tharpe added. “I appreciate the players that were here before me that I got a chance to play with and that are still friends with me right now. It’s going to be tough leaving a situation like this because of the teammates I’m leaving behind. Everything happens for a reason, and I have to continue my journey a different way.”

Of the situation, Self added: “Personally, it’s something that we 100 percent support and wish him nothing but the best. I certainly appreciate all of his efforts since he’s been here. Naadir has been a good player for us in his three years here. But we also respect the fact that he wants to be closer to his daughter and we want to do everything we can to support that.”

Self had no comment regarding any negative issues regarding Tharpe.

A picture of Tharpe and a woman that included nudity appeared on Twitter after the season. The emergence of the photo caused an escalation in negative comments about Tharpe by a fanbase unhappy with his play down the stretch of the season and in the NCAA Tournament.

Tharpe did not attend the postseason awards ceremony, but not because of any disciplinary reasons. He was attending the memorial service of his grandfather back home in Massachusetts.

It’s possible Tharpe will be immediately eligible for his senior year. Though he is not ready to graduate, he could apply for a waiver if he chooses a school close to home for these family reasons.

Tharpe was named honorable-mention All-Big 12 this past season after averaging 5.0 assists per game to rank third in the league. His 2.43 assist-to-turnover ratio also was third in the conference for the second-straight season. Tharpe led KU in assists (170) and free-throw percentage (82.1) and tied for the team lead in most three-pointers made (43).

KU has returning point guards in Frank Mason and Conner Frankamp and is recruiting Devonte Graham, who like Tharpe hails from Brewster Academy in New Hampshire.

KU also reportedly has contacted No. 76-rated Shelton Mitchell, a 6-3 senior at Oak Hill Academy in Virginia, who has been released from his letter of intent at Wake Forest.

Graham, 6-2 from Raleigh, N.C., who attended Broughton High before heading to Brewster this past school year, has narrowed his choices to KU and North Carolina State.

“He needs to be diligent in his decision and let the process take its course,” Dwayne West, Graham’s coach with Garner Road Basketball Club AAU, told the Charlotte Observer. “He didn’t do that last time.”

West said Graham initially was “nervous” because he was unranked by the recruiting services, gobbling up the first offer he received from Applalachian State in 2012. After changing his mind, he couldn’t obtain a release. So he attended Brewster Academy this past season.

West told the Charlotte Observer Graham is a “true point guard” who can also score.

“He has an understanding of what level he can play and compete at that he didn’t before,” West said. “The season at Brewster confirmed to him the reason he made the original decision (to leave Appalachian State).”

Groundbreaking today: Groundbreaking for the 32,000-square-foot, $18 million DeBruce Center is set for 11:30 a.m. today at the northeast corner of Allen Fieldhouse. The event is open to the public.

Lead donors are KU alumni Paul and Katherine DeBruce of Mission Hills. The DeBruce Center will become the home of James Naismith’s original “Rules of Basketball” and will be flanked by the stories of Naismith and Phog Allen.

The center will also consist of a student center to seat up to 320 that includes retail dining, cafe seating, a training table setting for both the KU men’s and women’s basketball teams and a catered event space.

With a connection to Allen Fieldhouse through the second-floor concourse and the Booth Hall of Athletics, the DeBruce Center will support future exhibits around the history of the game and KU tradition.

The rules of basketball were purchased at a December 2010 auction by David Booth and his wife, Suzanne, for $4.3 million. The rules have been in Austin, Texas, the last three years where Lawrence native Booth and his wife now reside.

Bids being taken: KU athletic director Sheahon Zenger recently told the Journal-World that the athletic department was in the process of receiving bids from architecture firms for the Fieldhouse Apartments project that will be the future home of KU men’s basketball players along with an equal number of non-student-athletes. Zenger said KU had not yet begun accepting bids from contractors for the $17.5 million project that will be built on Naismith Drive south of Allen Fieldhouse, but said that would be the next step once plans and designs are in place.

The 6-3 Woolridge averaged 7.3 points per game as a junior. He will graduate this month, thus will be eligible immediately at any transfer destination.

“Dan is the man,” Woolridge told azcentral.com. “I want to come back home. I’m leaning towards them.”

Woolridge has said he is transferring to be close to his ailing grandmother, who lives in Phoenix.

Camp starts: The Bill Self Basketball Fantasy ProCamp is being held today through Sunday in Allen Fieldhouse. Individuals pay between $5,000 and $7,000 to live the life of a college player for a weekend. No KU players are competing in the games.

Black, who has no football experience, has heard from three NFL teams as the draft approaches, Yahoo Sports said Thursday. It’s unlikely he will be taken in the draft, but he could attend a team’s minicamp. One problem is he’d like to be a second-round NBA Draft pick.

“Basketball is my love,” Black told Yahoo. “I’m definitely going to put effort into making basketball my life. But an opportunity presented itself and I want that opportunity to hold.”

Black joked that no matter what happens, he at least has Rodgers’ cell phone number. For the story go to http://ljw.bz/1kuCEuC.

Ahhh, I feel enlightened now. The information about Tharpe's daughter is key to him not having to sit out a year. We will never know if the family/child medical issues are embellished or not but knowing that the exception exists with the transfer rule for that reason alone can make you wonder.

Really hate to see a senior with so much experience leave. Is it too late to pull a Rio and untransfer??

I wish the best to Tharpe. His daughter is the most important thing for him right now in his life and he needs to be there to take care of her. I'm sure that he would have liked to have her come to Kansas instead, but knowing nothing about the relationship of the child's mother there's a good chance that Amara moving to Kansas was never going to be an option.

Hopefully Tharpe can get things on track and will get his degree and get a good job and be a good dad.

Very cool article about Tarik Black. Fun to read about his football prospects. Hopefully he gets a training camp invite to Green Bay, though with zero experience in the sport it's almost impossible that he'd make a roster in the next couple of years. However, he's got good strong hands and if he can catch a football, then they can teach him how to block, how to run routes, and all the details. If he ends up on someone's practice squad he could make an impact down the road.

I'd be very surprised though if he doesn't end up playing hoops. He could make a lot of money playing overseas ball for a few years if the NBA doesn't pan out.

He reminds me a little of Travis Releford in that he's probably a guy who, skill wise, is a fringe NBA talent, but really deserves a shot because of his work ethic and intagibles. However, there's so few open jobs in the league each year that just like Rele, he may never get a fair chance.

Thank you KUSports.com for fixing the "Active Discussions" Bar.

Also, could Manning be sending KU a hidden gem at PG? Surely Self won't try to sign two PGs though right? Just setting up a Plan B, perhaps.

A previous article indicated that the reins of leadership now rest in the hands of Perry and Jamari who are the longest tenured rotation players currently on the squad.

I have my doubts that Perry's personality fits that mold, but maybe this will ignite a fire and turn him into a killer.

However, I have no doubt that Jamari has the will and determination to take on this responsibilty. His passion and work ethic potentially could have a dramatic and positive effect on the personality of this team.

Also, I think Wayne, Cliff and Kelly all have warrior's hearts. I want to see more passion on the court next year and, as a third string center but the best and hardest fouler on the team [no one EVER got a three point play off of me], more physicality would be just fine with me!!

Best of luck, Naadir. Be a good dad.