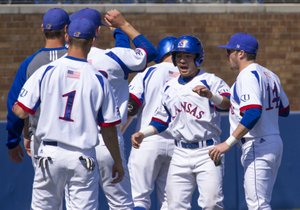 The Kansas University and University of Oklahoma baseball teams feature two of the top offenses in the Big 12 Conference. Their matchup on Saturday at Hoglund Ballpark had everything but offense.

In a pitcher’s duel, the Jayhawks couldn’t muster any clutch hits in the late innings and dropped their second straight game to the Sooners, 2-1.

KU right-hander Robert Kahana matched Choplick for most of the game, giving up two runs on six hits over 6 1/3 innings. Kahana didn’t record any strikeouts, but strong defense with a few diving plays limited Oklahoma (20-8, 4-1).

After the Jayhawks scored in the bottom of the third, the Sooners answered in the fourth. Sheldon Neuse hit a leadoff single and Anthony Hermelyn followed with a double. With two runners in scoring position and no outs, Hunter Haley hit a sacrifice fly to right before Hermelyn scored on a groundout.

“(In the fourth) inning, they had six straight hitters swing at the first pitch, which is almost unheard of in college baseball,” Price said. “Obviously, they were attacking (Kahana’s) fastball and trying to get after him early. Even if the pitch was a breaking ball, they were swinging at it. I was pleased with the way he grinded.”

KU associate head coach Ryan Graves told Kahana before his outing that he needed to pitch deep into the game after Friday’s starter Wes Benjamin exited after three innings because of a forearm injury, taxing most of the bullpen.

In the bottom of the third, junior Justin Protacio hit a one-out single and advanced to third on a throwing error by Choplick on a sacrifice bunt. Protacio scored on a sacrifice fly by junior Michael Suiter to give the Jayhawks a 1-0 lead.

“(Choplick) just threw strikes, threw the fastball over the plate,” said Protacio, who went 2-for-4 with two opposite-field singles. “He had a nice downward angle at his frame, 6-foot-8. He threw his off-speed for strikes. We just couldn’t hit it when it counted. He did a great job.”

KU loaded the bases in the sixth inning after a walk, a single by Dakota Smith and a hit batter, but Sooners’ reliever Drew Krittenbrick escaped the jam by getting KU junior Blair Beck to fly out.

The Jayhawks will try to avoid a three-game sweep when they face Oklahoma in the series finale at 1 p.m. today.