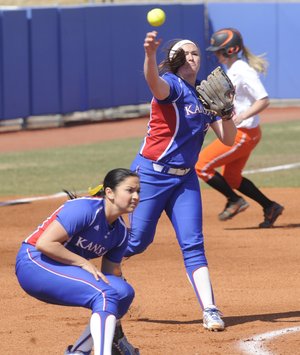 Chaley Brickey already had slammed into the dugout fencing while racing down a foul pop-up Saturday afternoon at Arrocha Ballpark. So getting mobbed by her teammates following a go-ahead, solo home run in the fifth inning just added to the beating she took while helping Kansas University’s softball team defeat Oklahoma State, 4-0.

The sophomore shortstop’s two standout plays both came in the fifth inning, in what was a scoreless game at that juncture.

First, KU third baseman Chanin Naudin snagged a hard-hit grounder off the bat of Shelby Davis in the top of the fifth, and threw her out at first. That kept two OSU runners at second and third, and secured a much-needed second out for Jayhawks starting pitcher Alicia Pille.

Next, Brickey delivered the defensive gem of the game. The Cowgirls’ Ari Morrison popped up a Pille pitch and the ball sailed toward the KU dugout. As Brickey sprinted into foul territory, chasing it down, she heard her teammates shout, “Room, room.”

But she crashed into the padded poles that separate the dugout from the playing field while making the grab to end the inning.

“They’re not as padded as they look — for sure,” the hustling shortstop said afterward.

Minutes later, following her two-out home run that put Kansas (26-10 overall, 2-0 Big 12) ahead for good, teammates gave Brickey a few more bruises when they congratulated her at home plate with friendly slaps to the head and shoulders.

“Getting mobbed by my teammates,” Brickey said, smiling. “It definitely rattles your head.”

“Cha is known for making spectacular plays like that,” Jones said. “So it really wasn’t a surprise. I knew, off the bat, that she was gonna get there. We needed that, though, to spark our momentum.”

Brickey’s critical catch to end the fifth helped Pille (9-3) pitch out of a jam, something the junior hurler also did in the third, when she allowed three singles, but no runs by OSU (19-13, 0-2).

“She’s a tough, talented pitcher, and she’s been tested so far this season, and has done extremely well,” the coach said. “I thought today she threw a great game.”

Sophomore relief pitcher Kelsey Kessler completed the victory, striking out five of the eight batters she faced in the sixth and seventh innings.

Jones, who also pitches, said the Jayhawks wanted to give the reliever some breathing room entering the final frame.

“We have a lot of faith in our pitchers, and we knew Kelsey could shut it down,” Jones said, “but it always helps to go into an inning with a little bit more confidence and a little bit of weight lifted off your shoulders.”

Kansas, which sealed the series victory, closes the three-game set with OSU today at noon.