Column: Iowa State’s hot shooting too much for most defenses, including KU’s 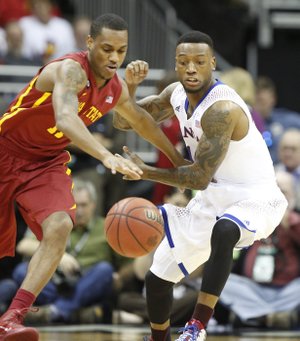 I like our chances a little better than 50/50 in the second game. I'd say 60/40. If ISU can play that hot for 6 games, they'll win it all. Unfortunately, no team can rely that heavy on the 3 that consistently. They lack a big man to eat up rebounds.

Markel Brown called it, if ISU is making their shots they'll win, and they did.

Correction: "Iowa State’s hot shooting too much for most defenses, ESPECIALLY KU’s"

Perimeter defense has been a problem all season. Don't take my word for it. Listen to Coach.

Self's help defense will always leave us vulnerable to hot outside shooting teams. There will always be one shooter left open.

If we face a team like Iowa State with five outside marksmen, we stand a good chance of losing unless they go cold.

Against that sort of team I'd like to see either a full court or half court press to keep them out of their offense.

This argument is too simplistic. For one, just saying that we will get beat on the perimeter ignores the fact that we haven't been this bad in a long time guarding outside shots. Secondly, when screens are set the hedge minimizes the cushion for most teams (including Self's teams of the past) so that so many open looks aren't given up. Third, the rotation on the help defense is much slower for this team than any other Kansas team I can remember under HCBS. And finally, we may not be perfect against the outside shot (no one is), but you can not argue that improvement can not be achieved.

First OSU, then WVU and finally ISU showed we are at the mercy of a good team that can hit the 3.

I think HCBS pretty much knocked the confidence out of Greene, White and Frankamp. They continually pass up open shots when they are on the floor due to the fear of being yanked.