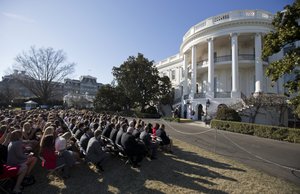 The Jayhawks were led by Lindsay Vollmer, who won a heptathlon title, and Andrea Geubelle, who was runner-up in long jump and triple jump. Vollmer and Geubelle were among a dozen KU athletes who made the trip to Washington.

Obama met with the athletes, who were given a tour of the White House, before concluding the visit with a short speech to the assembled teams on the South Lawn of the White House. Obama recognized each of the teams by name, beginning with KU track and field, before speaking about the ways college sports showcase athletes’ hard work and perseverance.

“It’s traditional to bring football and basketball teams here,” Obama said. “I think that for all these outstanding athletes in sports, it’s important to acknowledge that your investment in time and effort and dedication is just as significant.”

The president also praised the women’s champions for paving the way for his own daughters and other young women.

“There was a time when college women’s athletics was relegated to second status, and all of you here are showing the incredible strides we’ve made of the last couple of decades,” Obama said.

I'd turn it down. That's my political stance though.

Hard choice when invited as a team member and Athletic Department representative.

For an individual recognition, I've got your six! Of course Handlers of BHO, LLC, would never risk that.

everything is not political. it's not about the President, it's about the achievement. He is still the most powerful man in the world.

...but what are his thoughts towards the People that put him in office? (I ask because I do not know the answer). Are they merely "voters"? "Plebes"? "Taxpayers"?

(Who knows these answers?)

The money trail isn't hard to follow – suggest starting with Vacation and Travel expenses. A quick glance through Czar appointments would be enlightening as well . . .

Great job by KU Track on the Natl.Championship! I was in AllenFieldhouse as they introduced not only Diamond Dixon and her Olympic Gold medal achievement, but then again when they unfurled the NC banner! True goosebump stuff!! Men or Ladies, doesnt matter...simply it's RCJH!!!

Glad this comment thread is staying focused on this cool opportunity for the team. Regardless, congrats to our champions again! RCJKU!