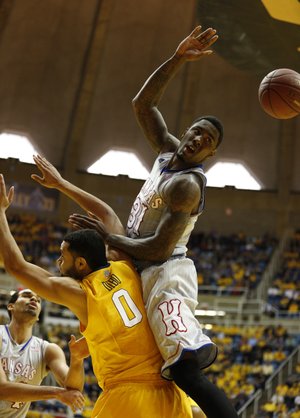 Images from Saturday's game between the Jayhawks and Mountaineers in Morgantown.

Kansas basketball coach Bill Self, freshman Andrew Wiggins and sophomore Jamari Traylor discuss the Jayhawks' loss at WVU, and what's next for KU.

— Wiggins far and away top Jayhawk at WVU

Morgantown, W.Va. — West Virginia junior point guard Juwan Staten of Dayton, Ohio, sat down with his father last summer to discuss goals for the upcoming season. Staten made becoming a unanimous first-team all-conference pick and Big 12 player of the year honors two of his primary goals.

“I’ll share this with you,” Huggins said. “On my ballot, the All-American one when you’re allowed to vote for your own player, I voted for him first-team All-America. I think he’s the best point guard in the country.”

Staten and KU’s Andrew Wiggins both helped their strong cases for Big 12 player of the year honors. Staten contributed 24 points, five rebounds and nine assists, driving his team to a 25-point lead. Wiggins had 41 points, eight rebounds, five steals and four blocked shots, steering a comeback to within four points.

“I’ve never seen him play like that,” Huggins said of Wiggins. “He made shots today and when he makes shots he’s really difficult.”

Staten had more help in this one than did Wiggins. Freshman center Devin Williams had a career-high 24 points and 13 rebounds and guard Eron Harris, hitting 5 of 7 three-pointers, scored 28 points.

Huggins explained why he wrote Staten’s name on his first-team All-America ballot.

“What he does for us at both ends of the floor,” Huggins said. “We’re in the best league in America. I think that’s what pretty much everybody agrees on. Here’s a guy who has been first or second in scoring. He’s led in assists. He’s led in assists-to-turnover ratio. He’s in the top 15 in rebounding. He’s in the top five in field-goal percentage. There’s not one area that you can really look at that he’s not one of the top guys in the league at.

“You’re talking about a 6-foot point guard and he’s one of the top 15 rebounders in the league. What more do you want him to do?”

Staten looks really like a solid PG. But he does palming a lot, too, I think. Embiid's absence does help him to roam around the basket easily.

Every player palms the ball now and as long as you are not too obvious about it, the refs don't call it

We had a tendency to make at least one opposing guard who played us with any talent to look like an All American. So although Staten is very good, take anything he did against us with a grain of salt. Our guards had serious issues with "everybody" all year long and we won despite them, rarely because of their play. Our PG sat more in the second half because of poor play than any of recent memory, heck any of the past 30 years. If I sound jealous of Staten I guess I am...

You make a good point, Rodney, but Huggins' comments are also valid. Staten's stats are tremendous, especially his rebounding stats, and some of the moves he makes are pretty amazing. If Wiggins doesn't get POY in the Big XII, I would pick Staten.

Huggins didn't say this because of what Staten did against KU. He said it because of what he has done in almost every game for this entire season. In 31 games, he failed to hit double-digit scoring ONCE. He finished the season leading the Big 12 in both scoring and assists. Check out his game log. http://espn.go.com/mens-college-basketball/player/gamelog/_/id/51449/juwan-staten

I like Kane, Staten, and Smart in our conference, they were all finalist for the Cousy award. Its just if someone did a composite of all the guards that played just us I bet it would look like an All American stat line. Forte, Hilsap, fill in the name, guys had career games, or 3's against us all year. Tough to watch. WV guards scored 52 of their 92 points, my word...

Rodney, would you want Staten playing for Kansas? I know I would.

I believe some have mentioned that Wiggins was not ready for the NBA. If you would be so kind to state why you were wrong now that you have been proven so. For those that hold on to their ridiculous opinions, name another player in college that could do what AW did against West Virginia

Chad, this is not to say that Wiggins isn't ready but I think most people think (as I do) another year might allow him to add muscle and skills such as going to his left. I think he should go to the NBA as the number 2 player in the draft but I don't see him having a breakout first season. By year three, he will start being a big-time player. Even Kobe Bryant took a few years before he started his Hall of Fame career.

The problem with "ready for NBA"is on what standards. While it takes great skill to be a pro baller, takes even more maturity. We look at guys like KD, Kobe,Kg, Westbrook,Rose,Love,Davis,Wall,Irving and make them the standard. Yes that's a nice list but there are 30 teams and 12 players suit up each game. Wiggins is ready for the NBA but should that be the standard? Jordan his rookie year averaged 28ppg. That's MVP numbers today and he didn't win it. He also had 3 years of college. You can be ready for the NBA talent wise, but the vast majority aren't ready maturity wise. Wiggins can be a all time great if he wants to. NBA has a reputation of lazy d and selfish basketball. Its like that for a reason. College helps you mature, NBA throws you into the fire. Guess you can't make Diamonds without pressure..

Andrew Wiggins has two big holes in his game right now. His ball handling needs a lot of work before he can be a true NBA superstar. He could stay in college another year to work on that, but he will be able to tighten up that area of his game much quicker be practicing against NBA players. No offense to any of the KU guys who guard Wiggins every day in practice, but they are not NBA caliber defenders. The other hole is his ability to finish through contact. This will go away as he gets older and fill out his frame more. This will happen naturally as he continues to work out and get older whether he's in the NBA or college. As much as I would love to see Wiggins stay for 3 years like players did a couple of generations ago (prior to the late 90's), Andrew Wiggins game will develop more quickly in the NBA than it will in college.

I guess my point would be if he isn't ready then who is ready. The King James comparison is bad news for anyone who isn't genetically engineered. It looks like the Canadian geneng program is a little to rehearsed and 30 lbs to light.

For steady, I laughed when I heard an announcer name Fred Van Vleet as his #1 point guard. I'm not laughing now. He is incredibly steady and is just as unpredictable and a better shooter too. Staten, of course, is fantastic.