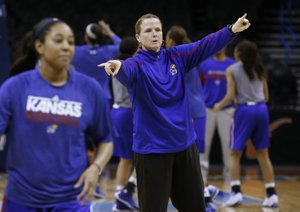 At no point this season have Kansas University women’s basketball players and coaches felt any lower than they did following their home loss to in-state rival Kansas State nine days ago. In a season full of self-inflicted setbacks, this one carried some shame with it, because the Jayhawks fell behind 21-0.

That same confounding start might actually have an upside, though, because KU gets a rematch with the Wildcats at 6 tonight in Oklahoma City, site of the Big 12 Tournament. Coach Bonnie Henrickson thinks her No. 8-seeded Jayhawks got a good draw in the No. 9 seed Wildcats.

“(It’s) another shot at ’em and a chance to make up for a game that we got off to such a poor start,” she said. “Plus, it’s a great opportunity for us to play another rivalry game in the tournament.”

Kansas (12-18) actually won on K-State’s home floor, 71-64, on Jan. 25, before losing eight of the next 10 games to end the regular season. Henrickson thinks the third meeting between the rival programs provides a unique opportunity.

“It’s two-fold, first of all, just the rivalry, and it’s the rubber match for this season after we both won on each other’s floors,” the coach said. “And then just the magnitude of the tournament. Somebody’s going home.”

The Wildcats (11-18) dropped four of their last five regular-season games, picking up their lone win at Kansas. With both teams skidding into the postseason, neither side has much momentum.

“The only positive thing is we played so poorly against K-State that it was nice to see we got off to a better start in the next two games,” Henrickson said.

The winner of Part 3 of the Sunflower Showdown moves on to face Baylor at 1:30 p.m. Saturday at Chesapeake Energy Arena.

It was Gardner’s first league first-team recognition and first honorable mention for Knight.

HOF Challenge: KU will participate in the Hall of Fame Women’s Challenge next year, the Naismith Memorial Basketball Hall of Fame announced Thursday.

On Nov. 30, Kansas will face Notre Dame in Uncasville, Conn., to conclude the HOF tournament, proceeds of which benefit the Hall of Fame.