Kansas players Joel Embiid and Jamari Traylor watch as Oklahoma State guard Markel Brown comes down from a dunk during the second half on Saturday, March 1, 2014 at Gallagher-Iba Arena in Stillwater, Oklahoma. 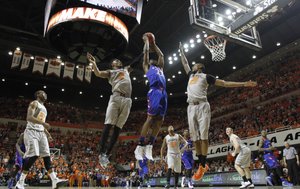 Images from Saturday night's game between the Jayhawks and Cowboys in Stillwater, Oklahoma.

Stillwater, Okla. — It’s not possible to win 10 Big 12 basketball titles in a row without putting teams on the ropes and keeping them there.

Then Markel Brown got hot. Then Smart smelled blood, and when that happens, all bets are off.

Smart scored 20 of his 21 points in the second half, steering the Cowboys to a 72-65 comeback victory Saturday night in packed Gallagher-Iba Arena.

“His plays, once he made one or two, I could see it coming,” Oklahoma State coach Travis Ford said. “You can kind of see it coming. He gets in that mind set, he’s going to make some plays.”

Smart’s final two big plays were drives to the bucket, where Joel Embiid stood ready to block a shot. Smart, who had missed all seven of his first-half shots, didn’t let that deter him. He shot both buckets right over the freshman 7-footer.

“When you’re great at something and it’s not going your way for a while, you’re not going to quit,” Ford said of Smart’s first-half play. “He knew he was taking bad shots. He knew that.”

Kansas had something to do with that. Wayne Selden and teammates stayed in the way of Smart in the first half, which ended with KU up, 26-25.

“I don’t think you’re going to shut him out, ball’s in his hands too much,” Kansas coach Bill Self said. “He’s so good at driving it and his teammates helped him by getting us into the bonus. Like any guy who is thirsty or hungry, if you’re the best guy in America at drawing fouls, you’re going to drive it all the time.”

On the other side, Kansas point guard Naadir Tharpe didn’t have an uneven performance such as Smart’s. On this night, Tharpe encountered two tough halves. His scoreless first half featured four turnovers. He finished with six miscues and six points, five nights after he played so well in scoring 19 points in a home victory against Oklahoma.

KU doesn’t need a point guard who can dominate games the way Smart did in the decisive stretch Saturday. It just needs a steady hand to treat possessions as precious and settle down the team when things grow a little wild. Oklahoma State quickly kept Tharpe from having that sort of influence on the game and he  never could shake off his slow start.

On a night that at times recalled KU’s 24-turnover loss at Florida, the Jayhawks had 22 spills. Oklahoma State knew the best path to victory came in stealing the ball before KU could throw it inside.

“Kansas is a very, very good team,” Brown said. “We just went out there and we pressured them Cowboy style and we did it how we did it early in the season. We got them in our press, they kind of looked at it weird and started making turnovers. We pressured them on the defensive end and let our defense create our offense.”

KU followed that path to most of its 10 titles under Self, but hasn’t done as well at that this season. And the Jayhawks haven’t always taken good care of the basketball. That will need to be remedied for KU to come close to reaching its high ceiling.

Get up, shake the dust off and turn it around!

Never give up! Regular season Champions!

We believe on you Jayhawks!

I do not mind getting beat. We did not get beat, we played so poorly we gave them that game. If we would have just took care of the ball alone we would have had a great chance to win. So many unforced turnovers with little or no pressure really has to make you wonder about this teams chances going forward. Did we hit our ceiling tonight backing into the conference title outright? I said before they are a Sweet sixteen team, and I stick by that. But Tharpes play was beyond dismal, if he plays like that we might not make the S16.. Turn over, Turn over, bad decision, shoot way to early in shoot clock, no touches by post player, turn over, bad pass. Over and Over in both halves. The guy can be a train wreck some nights. It is so disappointing if we had someone average at pg we would be fine.

Well said, Rodney. I agree with the unforced TOs. We shot ourselves in the toes. On top of that, we hurried the offense a lot: one shot, missed, game over. Mason continued to take the matter into his own hands. Tharpe was a bone head leader last night. Perry continued to get his ass whooped by playing a scardy cat.

However, I saw us compete hard enough last night, especially the 1st half on D end. Unfortunately, we're kind of loss against teams that pressurize, as Tom reminded, like Florida. We helped them to get to FT line too much.

I understand disappointment with our guard play. However, You don't win the B12 with a below average (which is precisely what you're calling Tharp) point guard.

Granted, I don't know which Tharp will show up in any given game, but there were other miss-firing Jayhawks last night.

I'll cool the hype a bit going forward and save the praising until and if they get to Arlington, Texas.

Markel Brown: "We got them in our press, they kind of looked at it weird and started making turnovers."

That is a damning statement. It shows that we panicked when they went into a press.

We didn't panick! OSU has good athletes and they were up to the task! We did not play at the level we were capable of! In fact, we played some dumb ball but with a minimization of turnovers, we are capable of playing at a far higher level!

"Smart has to be careful doing that or he will develop a reputation as a flopper" Best play by play of night.

I am not bothered by this loss. I felt that we would lose this game before the season started. We will finish the conference season 15-3.

Did you also feel that OSU would have a below .500 league record at this point? OSU did not play that good last night, KU gave that game away with their poor play.

Consider me bitter & unclassy & delusional if you must, BUT to me in the 2nd hlf. Sat. Night that was the WORST MOST BLATANTLY SEEMINGLY BIASED Officiating I've seen in a college game since UCLA at KU (1st hlf. back in '96)....going on NEARLY 20 YEARS!!!!