Kansas' Andrew Wiggins jumps rope with a student during a kids basketball clinic in New York, Wednesday, June 25, 2014. Wiggins and other 2014 draft prospects are in town for the NBA draft in Brooklyn, New York on June 26, 2014. 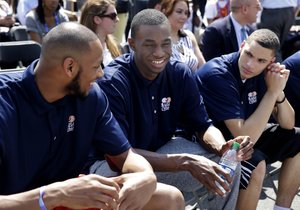 New York — Andrew Wiggins remembers a time, during ninth or 10th grade in Canada, when he was not the highly touted basketball phenom we know today.

He has to squint a little to recall the details of days gone by, but the memories have served him well since he left Kansas University by declaring for the 2014 NBA draft. The three-month draft process, which culminates at 6 tonight in Brooklyn’s Barclays Center, has tested him in every way possible.

On Wednesday, Wiggins and 19 other draft lottery hopefuls went through one final day of preparation for this year’s main event. The Toronto native was asked about his home country and home cooking, NBA topics like James Harden’s beard and Lance Stephenson’s antics, plus — of course — the top pick.

Before former KU teammate Joel Embiid was injured recently, it was believed that either Wiggins, Embiid or Duke’s Jabari Parker would be this year’s No. 1 pick. Now it seems to be down to Wiggins or Parker. Not that you’d know from watching the 6-foot-8, former KU guard with extraordinary athleticism and a seemingly unlimited ceiling. Wiggins smiled a lot, sweated a little and seemed more comfortable on Wednesday than he had at any point during his time in Lawrence.

“I’m just enjoying the moment and enjoying everything this process has to offer,” Wiggins said. “You never really know what could happen on draft day. I’m anxious. I want to know what’s going to happen, and tomorrow’s the day where everything changes and you learn your destiny.”

In some ways, this moment has been Wiggins’ destiny for a while. A year ago in New York, there was plenty of chatter about Wiggins as the obvious No. 1 pick in the 2014 draft. Today, there’s more uncertainty about Wiggins’ top-dog status, but he has never wavered.

Asked if he paid much attention to draft projections at this time last year, Wiggins shrugged.

“No,” he said. “That’s looking too far into the future. I was just getting into college. I wasn’t worried about that.”

Wiggins held court about the benefits of going to Kansas, playing for Bill Self and having at least one year to be a college kid.

“I just know how to prepare for everything now,” Wiggins said. “The spotlight, dealing with the media, fans, things off the court. That’s what Kansas taught me a lot.”

Despite his calm demeanor, which was on display both on Wednesday and throughout his time at KU, Wiggins insists that he’s as competitive as anybody.

“You just always want to be the best,” he said. “In high school, there are guys above you, and you want to be better than them. In college, you want to be national champions. And in the NBA you’re going against the world’s best, so it’s going to be a challenge to conquer that and become one of the elite players at the highest level of basketball.

“Just being selected is amazing to me, but being a competitor, I don’t want anyone else going ahead of me. I still want to go No. 1.”

Near the end of Wednesday’s media session, a writer from Cleveland asked if Wiggins had been given any indication of where he might be picked.

“He’s nice, man,” Lopez said. “He’s a natural. And when you’re a natural, you can adapt to anything, and the NBA’s going to allow him to grow his game. If you stay focused on the game, you don’t have to worry about anything else. Now he’s on top, and he can use that to fuel himself to make sure he stays on top of his game. Because now everybody’s going to come after him.”

Fellow KU one-and-done Ben McLemore, who was picked seventh by Sacramento last year, said Wiggins was in for the night of his life.

“It’s a mixture of excitement and nerves,” McLemore said. “You just have to take deep breaths and enjoy the opportunity to even be in the green room. You know your name’s going to be called, you just want to know when. But it’s a great feeling.”

Glad to hear the perspective of Bmac, just one year out from this same day of excitement. Must be pretty nerve-wracking, but in a really good way.

From what I read about Parkers workout the other day, he really doesn't want to go to Cleveland. Meself, for that kind of money, I'd live in Manhattan, KS for that three year rookie contract if that's what it took!!

Get better Jojo, we're all pulling for you!! I'm voting for you in Boston!

Today is the day! Good luck to Andrew, Joel, and Tarik!