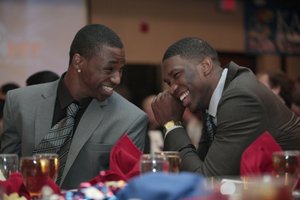 The 7-foot former Kansas University center from Cameroon has been ordered by doctors not to fly for 10 days to two weeks following Friday’s successful foot surgery in California.

KU still will be well-represented during the 2014 draft extravaganza, set for 6 p.m., on ESPN.

Also, 12th-year KU coach Bill Self confirmed to the Journal-World he’ll be in New York as well, rooting on Wiggins in person and Embiid from afar.

“I’ll be emotional, but not such I’m hoping one goes ahead of the other,” Self said of Jayhawks Wiggins and Embiid. KU’s coach still does not discount the possibility Embiid could be tapped No. 1 overall by the Cleveland Cavaliers in spite of the injury, while realizing the likelihood is a healthy Wiggins or Parker will claim that honor.

“I just hope they both get in a great situation,” Self added of the KU duo. “Even though the draft is important, and I know it changes lives on that day, really that’s when the work begins, too. In regards to who drafts you and what number, now it’s time to go prove yourself. A lot of attention goes in being a high draft pick, I know. The bottom line is, you still have got to go produce and perform.

“I’m really excited for both these kids. I know they’d both like to go 1, but if the other one goes 1, the other will be happy for him going 1. That’s how these two are. They’ve always been this way since I’ve known them. I certainly don’t anticipate anything changing.”

ESPN’s Chad Ford, who follows all aspects of the draft closely for ESPN.com, currently projects Wiggins being taken No. 1 by Cleveland, Parker No. 2 by Milwaukee, Exum No. 3 by Philadelphia and Embiid No. 4 by Orlando.

Pretty much all the analysts have Wiggins and Parker now vying for the No. 1 slot. Nobody has said Cleveland for sure will pass on Embiid, who will miss four to six months following his surgery to repair a stress fracture.

“To me, Jabari is more an interior player than Andrew, and Andrew is much more a perimeter player than Jabari,” Self said in discussing the 6-8, 241-pound Parker and 6-8, 197-pound Wiggins.

“They’re different. Certainly Jabari is a terrific prospect. I think his skill set for a guy that tall that can play inside ... that’s where he is so effective for Duke, to get a big guy away from the basket. But he can still score on a big guy on the post. I’d say Andrew would be much more of a guard. Andrew is a 2-3, where Jabari would probably be considered a 3-4. They both are very good prospects. Andrew’s skill set has not quite caught up with his athletic ability. When it does, and I know he’s working hard on it, it’s going to set up his game so much better. I think he translates not to a good pro, but a great pro,” Self added.

“For him, everybody felt bad because he’s such a nice young man,” McKinney said of Embiid. “Just watching him progress as he’s done since last summer, there are great things ahead of him, and there still are. To leave school and have minor misfortunes like this right now, he’s going to have to stay strong and have a lot of support through this process from his friends, his family and even the team that drafts him.”

The Journal-Sentinel speculated the Bucks will hear trade offers from various teams.

“I think there are going to be some changes and the discussion of where he (Embiid) might fall in the draft or if he falls in the draft. Our pick is very valuable, and we knew that when we were able to secure it on the draft lottery day,” McKinney told the paper. “Even now (after Embiid injury), I’m sure we’re going to get a lot of calls. We feel like we’re in a great position. We have to keep our ears open, and John (Hammond, Bucks GM) probably will address this more, but it would be very difficult to move out of that second spot. It would take a lot.”

Embiid’s agent, Arn Tellem, can pick and choose to which teams he releases information on Embiid.

Hennigan would not tell the paper if the Magic would consider drafting Embiid without detailed medical files on Embiid. It’s been speculated the Magic would take Embiid fourth if he falls that low, considering they also have the 12th overall pick. An NBA source told the Journal-World that word throughout the league is indeed the Magic will select Embiid.

Doctor comments: Dr. Mark Adickes, who works for ESPN, was one of the Houston Rockets team doctors from 2006-10 and examined Yao Ming, who had the same injury as Embiid — a stress fracture in the navicular foot bone.

“Embiid’s news certainly conjures visions of a hobbled big man such as Yao, but Yao’s fate isn’t necessarily what awaits Embiid,” Adickes writes. “Although there are similarities between Yao and Embiid, there are also a number of key differences. First, Embiid is 6 inches shorter and about 70 pounds lighter than Yao, placing markedly reduced forces on his feet. He is also six years younger than Yao was when his foot-injury odyssey (that ended Ming’s career) began.

“Another key difference is mileage. Yao had played eight pro seasons prior to his injuries, five in China and three in the NBA. Yao also played extensively for the Chinese national team. Embiid does not have near the wear and tear on his body and, at 20 years old, should be able to heal this fracture uneventfully,” Adickes writes at ESPN.com.

“Finally, Yao had extremely high arches in his feet, which, when placed under stress, compressed his navicular bone like a nutcracker. While I have neither examined nor seen the X-rays of Embiid, it is highly unlikely that he has similar anatomy as Yao.

“A number of studies have shown successful returns to sport after a navicular fracture. The average return is four months whether surgery is performed or the bone is allowed to heal in a cast with the athlete placed on crutches. Given Yao’s troubles, it does not surprise me that Embiid’s team has decided to choose surgery in an effort to reassure NBA executives that he will be ready to play by the start of the 2014-15 season.

“Although it is a worrisome injury to be sure, given Embiid’s age, body type and lack of mileage, I fully expect him to heal well and have a solid NBA career.”

Gee..I guess no one ever heard of a guy called Kareem Abdul Jabbar???

Good luck to our guys!

It probably adds some $ to get 7' of material, but still doubt that there is a suit worth anywhere near $20k. Just wasting $.

Anything more than $5000 for a suit is just showing off, it is very hard to tell the difference above that unless you can see the label. You want to make a suit pop, its all about the watch, rings and bracelet. Now there you can drop 20 times the price of a custom suit on bling for draft night. But if you want to stand out, do something unique like Joakim Noah, I still can't get the image of him on draft night erased from my brain LOL.

Hope he has a successful recovery and career.