Former Kansas University center Joel Embiid is scheduled to have surgery Friday to repair a stress fracture in his right foot, a stunning development that could affect the top choices in next week's NBA draft.

Embiid, one of the top three candidates the Cleveland Cavaliers were considering for the No. 1 overall pick, fractured the navicular bone in his right foot, agent Arn Tellem said Thursday. Embiid will be unable to participate in any additional workouts and will not attend the draft in New York.

Prior to the injury, Embiid was widely considered to be the front-runner to be taken by the Cavaliers. The versatile 7-footer had a jaw-dropping freshman season with the Jayhawks, averaging 11.2 points and 8.1 rebounds while blocking 72 shots to earn Big 12 defensive player of the year honors.

His combination of nimble feet, powerful athleticism and the soft touch on his jumper prompted comparisons to Hakeem Olajuwon, the former Houston great who led the Rockets to two NBA titles in the 1990s. Embiid impressed teams and scouts during workouts in California earlier this month, helping him show he was fully recovered from a stress fracture in his back that caused him to miss the Big 12 and NCAA tournaments.

Exactly when Embiid injured his foot was not immediately clear, but the combination of last season's back injury and this summer's foot injury could give some teams pause on draft night. Now what seemed to be a sure-fire selection in the top three picks, if not the first overall, could turn into a mini-slide down the draft board if some teams worry about taking a player with a history of injuries.

That could open the door for swingman Wiggins or Parker to jump into the top spot. Even though the Cavs do have Kyrie Irving as one of the focal points of the team, Australian point guard Dante Exum is another candidate who could surprise and be picked first overall.

Parker is described by scouts as the most NBA-ready player in the draft, a moniker that could appeal to the Cavs as they look to solidify a young roster that missed the playoffs for the last four seasons.

The Milwaukee Bucks pick second and the Philadelphia 76ers are third while the Orlando Magic, who have promising young center Nikola Vucevic, pick fourth. If the Utah Jazz, who have Enes Kanter and Derrick Favors as part of a young frontcourt, pass on Embiid with the fifth pick, it would be hard to imagine him getting by Boston at No. 6 or the Los Angeles Lakers at No. 7.

If true, he may drop enough to end up with a much better team.

The big question – is it correctable ???

Joining with well-wishers around the globe, hoping for a solution!

Word is it was the Cavilers doctors that found the broken bone in his foot. A seven footer with back and foot issues, talk about risk/reward pick.

Joel's back injury was a direct result of a physical impact to the area and not an issue with his body being too big to support his weight. This foot injury is a much bigger issue than the back unless the fracture occurred because someone stepped on his foot, this appears to be a developmental type injury that could be a reoccurring issue.

And as I had mentioned here before, folks that have these issues are simply more susceptible to stress fractures. That's exactly why Self's explanation that it was no longer an issue was simply not true. Here's what I posted on March 27:

How is everyone here just definitively stating that the back injury isn't a big deal?

I believe the statistic is that approximately 60% of athletes that have a stress fracture end up getting another one.

The term is "stress". It was not a traumatic injury. A stress fracture is due to load or force being placed on an area over time and the bone not properly healing itself as it normally does. This is completely different than a fall, or one time deal. The stress fracture did not occur when he was "slammed to the ground."

One's own body composition -- the elements that heal bone -- can make that person more susceptible to stress fractures, too.

Most likely, it was a result of Embiid compensating for his knee injury (near ACL tear) in the TCU game, thus creating more load and stress due to his altered stride or gait, and protecting it when he landed after jumping. That's just speculation, but it fits completely. It then reared its ugly head in the WVU game at home when he landed awkwardly, and his back muscles seized up to protect it.

But more of a red flag if he stays at KU and has more back issues next season.

I had the exact same back injury Embiid had, and there have been countless other athletes that have had the same back injury. This specific back injury is one that does heal 100% with time and rehab. I apologize if I trust personal experience and many conversations with a back specialist on this issue over your opinion. You can disagree all you want Jack, but you're not changing my opinion on the matter because I have lived it. 10 years without issue and still lead a pretty active life.

I agree with you Jack. It has gone from a Red Flag to an SOS about his health. It will be very interesting to see how far he falls with this news. Aaron unless you are 7 feet tall and a professional athlete not sure you are comparable. The "stress" he is putting on his body has to be different and the recurrence of injury and now to another part of his body, this looks like he will battle this his entire career. It just seems very risky to use a lottery pick on him. I wish him the best and hope somehow this all works out for him.

Aaron -- see, again, you're missing the point. Whether a specific injury heals 100% is not the issue. I agree with you there. You are letting your experience with your injury cloud your judgment.

As I've tried to explain, and you apparently refuse to comprehend or choose to ignore completely, it is whether someone who has a stress fracture is more prone to further stress fractures due to how their bones recover from recurrent stress. Certain folks are just more susceptible to that sort of injury.

Secondly, if you're doctor is telling you that you get a stress fracture from "a physical impact to the area", you need a new doctor. That sort of fracture is the "normal" kind, so to speak. A stress fracture is when the bone doesn't heal normally after repetitive use. It's not from one incident. It's bone related. A normal fracture is traumatic in nature (trauma related), and doesn't relate to the lack of normal healing. What can happen is that symptoms flare based on incidents. I have made this very easy for you. Here is a simplistic link from the Mayo clinic.

That would be the equivalent of taking Greg Oden over Kevin Durant.

I can't count the number of times that I've stated that the above line was not in any way valid it comparing Joel Embiid v Wiggins (or Randle or Parker) but now there is absolutely no chance of Embiid being the number one overall pick. I wouldn't be surprised to see him drop out of the top 10.

But this is not the 2013 Draft. You would be passing up future all-stars drafting him #1.

There is no chance that Cleveland would use their number one overall on Joel Embiid after what happened with Anthony Bennett last season. The 2013 overall is already considered a bust, averaging more fouls then either points or rebounds last season.

Terrible news for Jo. The only possible good news is that he might get picked by a team that is more stable. I hope he gets healed and lives up to his potential. Because it is off the charts.

The farther he slides, the better the team is he lands on. Could be a good thing maybe? Although, it is quite difficult to see the silver lining in times of adversity.

Terrible news, for now! Just how far will he slide in the draft?

I hate seeing this. Now I think a lot of GM's will take the Greg Oden comparison as being a valid one. With this draft being so deep with talent, I can see him sliding out of the top 10. I don't see any GM risking a possible future All-Star for a player who wasn't able to play a complete season in the NCAA. It's too bad that Embiid cannot do what Rush did in 2008.

So, this stress fracture of the foot magically would not have reared it's ugly head?

Actually, the fact that the injury is a stress fracture supports the decision to turn pro. He is obviously highly susceptible to this type of injury. He was within one week of being the #1 pick. Staying another season -- can't we say, reasonably, that this issue would have surfaced over the course of another season?

I agree with everything you've said on this one Jack. Had he stayed in school this new foot injury would probably have developed. And if it had there would have never been any number one pick talk, he'd be looking at mid-late first round. The fact that teams were so high on him will keep him in the lottery.

A stress fracture in the back, yes worrisome, but it is common. However, foot injuries for a big guy can become a nagging injury for the rest of their career. It's hard to choose an extremely talented, but injured, center over players who've never had health problems.

This is a damn shame. He has the potential to be a great player. Unfortunately I have two words that sum up this talented young man's future in my opinion: Greg Oden 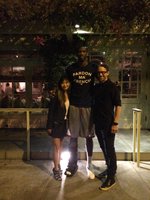 My bro and his lady just bumped into you know who in LA. He said Embiid was saying his foot isn't that bad. Hope he's right! by Priest Fontaine

I sure hope he is right! And a stress fracture is something you can come back from, MJ is proof of that and many other athletes. Awesome they got to see him in LA though! I lived there for 3 years, it's a fun place.

This could be a blessing in disguise and I think the Celtics are salavating with excitement at this point. If the top 5 teams are dumb enough to pass on Embiid, they will definitely not pass on him, and he could end up with a much better team. And Exum as number 1? Cavs could make it's 3rd straight draft mistake. They can't lose with Wiggins or Parker, so I hope for their sake they go with one of them. Prayers for Embiid though! Wish you a speedy recovery big fella!

There were also ESPN and LJW articles saying Jordan, McHale, and Ilgauskas had the same thing without repercussions; Kaun too. Other ESPN articles saying Joel will be 4-6th. Who knows, but many players have succeeded with this injury/surgery, so the Greg Odom screamers should step back and look at all the reports, not just one or two.