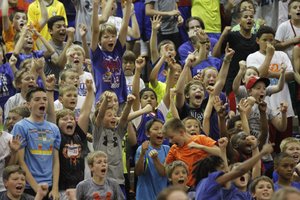 Former and current KU basketball players scrimmage at the Bill Self Basketball Camp, Wednesday, June 18, at the Horejsi Center.

Instead, the former Kansas University combo guard deferred to current Jayhawk sophomore Frank Mason, who sped through the lane for a driving layup with 7.8 seconds left in overtime, giving the Red team an 84-83 victory over the Blue squad.

“He told me, ‘Give me the ball,’ so I slipped it to him. He did his thing on his own. He kept going and going, and I like it in him,” Johnson said after watching the 5-foot-11 Mason tie Conner Frankamp for team-high scoring honors with 20 points.

“I didn’t see a game-winner. I saw him finishing the game in my eyes,” added Johnson, who also dished to Mason for a three that tied the game at 80 with 1:20 left in OT.

“I know if he gets going, he’s the type of person who can score six or eight points in a row,” Johnson said.

Mason cashed four threes from long range Wednesday and was equally impressive in driving to the basket.

“I think he just needs to keep that in mind — he can do that at any time,” Johnson said of Mason hitting the lane for layups. “Whenever he needs a bucket, I honestly feel he can go straight down the lane and get a bucket. If he thinks like that and feels like that, he’ll do that,” added Johnson, who contributed 12 points for the winners.

“Any game I play, I always want to win. I take pride in it. Today it was just a camp game, but still I just wanted to win it,” Mason said.

“I was excited to get the last game-winning basket for my team. I’m just trying to do whatever it takes to get the win.”

Of slashing to the goal instead of taking a deep jumper for the winner, he said: “It’s a higher-percentage shot. I didn’t want to settle for a jump shot on the game-winning basket.”

Mason’s layup answered a three by Tyrel Reed (16 points, four threes) that had given the Blues an 83-82 lead at :37. The Blues actually re-gained possession with that one-point advantage. Blue freshman Kelly Oubre missed a three from the side at :14, giving the Reds a last shot at victory. The Blues didn’t get a shot off on their final possession following the Mason hoop.

“I don’t think he (Oubre, who had 14 points) knew the shot-clock awareness,” said Blue forward Travis Releford, who scored two points. “He’ll learn that once he gets familiar with coach Self.”

Brannen Greene, who had 23 points in a camp victory last week, scored 21 points for the losing Blue team, while Jamari Traylor had 11 points. Perry Ellis scored 16 for the Reds.

“I think the new guys did pretty well. They could have done better. They are getting a feel for everything,” Mason said. Freshman center Cliff Alexander had eight points off four hard dunks to go with Oubre’s 14 points and Graham’s six.

“I know they will be much better once the season starts. It was the same for us (getting used to college last year),” Mason noted.

Tryouts would be dandy: Both Johnson and Releford said they’d love to be able to try out for a spot on KU’s World University Games team next summer. Self said if KU doesn’t have 12 scholarship players available, he might be adding some former Jayhawk players to fill the roster.

“That would be nice,” said the 6-foot-6 Releford, who averaged 7.2 points and 1.9 rebounds a game last season for Okapi Aalstar in Belgium.

“That would be exciting if any of the guys could come back and participate,” added Releford, who worked out with the NBA’s Sacramento Kings last week and is headed to work out with the Houston Rockets this weekend.

The 6-foot-4 Johnson is healthy after returning from Poland early for a procedure on his knee. Releford is recovered from a stress fracture in his foot that caused him to miss some games in Belgium.

Highlights: Alexander had a vicious block of a Greene layup. Undaunted, Greene on the following possession swished a three over Alexander. ... Rebounding machine Alexander followed a Frankamp miss with a slam dunk. ... Mason stole the basketball then lobbed to Wayne Selden on the break for a one-handed slam. ... Mason lobbed to Ellis for a slam. ... Landen Lucas dunked off a great inside pass from Selden. ... Brady Morningstar missed three straight threes on one possession, the Blue squad grabbing yet another rebound which culminated in a Greene make from three. ... Oubre followed a Graham miss with a slam-dunk rebound. ... Graham passed off the backboard to a trailing Greene for a dunk. ... Christian Garrett scored a basket, then on the ensuing possession set up Traylor for a hoop.

Graham may be taller, but I think he'll have to work incredibly hard to ever take the starting job away from Conner or Frank. They both look poised for a break-out year.

Would like to see more than 2pts from Hunter Mickelson

KO and Graham has to be wondering who these #14, 20 and 0 guys come from! CF has the look of Wyatt Earp, also from Wichita, ready to lay down the law with his gun blazing. If Self truly gives the green light to Frankamp and Greene, Ellis and Selden will slice & dice our opponents to death. I bet the level of talent on this team has been a big eye opener to the freshman. Mykhailiuk better come to town prepared for a fight.

I know you like facts....... Wyatt Earp was from IL and only was in Wichita for about 18 months, he was not rehired by the Mayor and moved onto to Dodge City to help run his brothers brothel. Actually his most noteworthy gun related story in Wichita was when he leaned back in his chair and his gun fell out of his hostler discharged and shot a hole through his jacket and made a hole in the ceiling. Now Bat Masterson and his brothers were a force in Wichita and Dodge City.

I really hope Greene and Frankamp can play D this year. They HAVE to play.

Sorry they are just fooling around, Not a lot really learned here.

Don't take a lot from a scrimmage. I want to see Mason have a consistent outside shot and be distributor. It would be nice if when he drives he has the awareness to know when to either pull up or find the open man, instead of always driving for a lay up and getting it blocked the majority of the time. He's a good kid and really hope this year he improves because we need a consistent floor general.

Don't mean to be rude but if Graham would have had the game Mason had some of ya"ll comments would have been different. Not one poitive comment about Mason although the article was more about him than anyone else , the kid can't win with most of the regular posters.And Mark I guess you just ignored what you like to see him do is exactly what he was doing at the end of the year once he started to really figure it out.Can you please tell me how many times he got his shot blocked last year driving to the basket because if I can recall his biggest problem was he was anticipating getting foul calls when he was getting knock out the air and not focusing more on finishing the shot,your block shots are figment of your imagination.

Bernard I couldn't agree more. As some of you might recall, I was on the Mason band wagon along with Keegan, after watching Frank last summer. He has shot the 3 well this summer and continues to create off the dribble and he pushes the ball up court faster and better than any guard we have. A continuing criticism of Mason's game, as reiterated by Mark, and not without some basis in fact, is he takes everything to the rack and gets too many shots redirected by the other team's bigs. Our bigs have an obligation to establish an open passing lane for him when he penetrates and causes help defense to shift to him to stop his dribble penetration. As he plays more, which he will, his team mates will become much more familiar with his decision making on the drive and get to the open space with an appropriate angle to give Frank a "dump off" pass opportunity. I also believe we will play a little more pressure defense this year because of our over all athleticism and I think that will play to Frank's strengths in jumping passing lanes and playing pressure on ball defense. In most of the comments relative to him, he almost seems like an afterthought. He will show he is much more that that.

sounds like a really competitive scrimmage. Way to go Frank! Keep up the good work.

I'm going out on a limb here and assuming that Perry Ellis' most improved defense is why Hunter Mickelson (a poor man's Myles Turner?) only had two points.

Even if Green, Reed, Oubre, and Morningstar hogged all of the shots, I'd still hope he'd score more than 2 off of putbacks.

Surely he played a majority of the minutes with Traylor being the only other guy taller than 6'7 on that side, but maybe they played the 4 guard lineup with Greene playing the stretch 4.