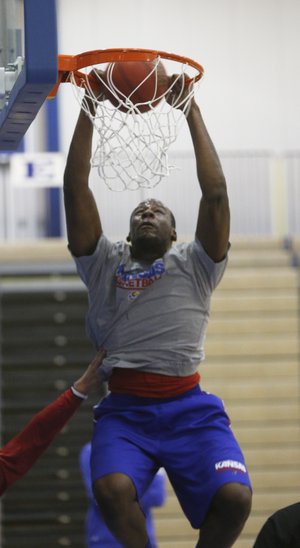 Instead of having a primary ball handler in a starting point guard role, Kansas University basketball coach Bill Self would prefer three combo guards all capable of bringing the ball up and making plays.

Members of the Kansas University men's basketball team, as well as former player Ben McLemore, of the NBA's Sacramento Kings, go through drills in front of campers June 10, 2014, at KU's Horejsi Center.

Kansas University freshman post Cliff Alexander blocks a shot at the rim, then finishes a slam dunk on offense as the Jayhawks go through drills at Horejsi Center on June 10, 2014, at Bill Self's basketball camp.

Kansas University’s basketball players tend to play unbelievably hard, even in 4-on-4 full-contact halfcourt drills for Bill Self basketball campers.

“As you can tell by the way we practice, we are all savages on the court,” Kelly Oubre Jr., KU’s 6-foot-7 freshman wing from Findlay Prep in Henderson, Nevada, said Tuesday in Horejsi Center.

“Nobody wants to get anything easy. We are all going out there every day (treating) ball like it’s something to eat, like we are starving. That’s my definition of savages pretty much.”

Oubre, who enters KU as Rivals.com’s No. 6-rated player in the Class of 2014, said he’s as hungry as anybody.

“I have to come in this game starving,” the McDonald’s All-American said, “because if I don’t, if I think everything is going to come easy to me, it’s not going to be successful.”

Oubre, who averaged 22.2 points and 6.7 rebounds for 31-5 Findlay last season, exhibited a nice touch on his lefthanded jumper Tuesday.

“My attitude, my grit ... I don’t take no for an answer,” Oubre said, asked what he brings to KU. “I’m going to go as hard as I can while I’m on the court. I’m going to give coach everything I have.”

Self said the summer is an important time for Oubre, who arrived about two weeks ago and went to work at Washburn coach Bob Chipman’s camp in Wichita.

“I think he’s struggling like all freshmen are, as far as he’s used to doing it a certain way,” Self said. “Not that his way is wrong, but we just do it different. He needs to be a defender, extra possession, offensive rebound guy that can just make athletic plays which will set up his offense.

“Footwork,” Self added, referring to what is different on the major-college level. “You’ve got a guy playing underneath you now. Before he could just out-athletic people. Cliff (Alexander, 6-8 frosh) is going to go through the same stuff. Really Devonté (Graham, 6-2 frosh) is the most prepared on June 10 than any of them (newcomers) because he’s older and been playing against some real guys every day in practice (at Brewster Academy last year). Eight, nine guys off that team went Div. I. He’s more used to what it takes every day as far as playing hard and competing. Those other two are going to be terrific when they get their feet under them.”

Oubre, who is roommate of Graham, said he is enjoying his new college home, though he has spent more time in the gym than anywhere else.

“I want to work this summer on every aspect — ballhandling, shooting, being a leader, defense, doing whatever coach needs me to do. College basketball is more physical than high school. It’s more upbeat and more uptempo, so it’s pretty much the biggest adjustment I have to make in my game.”

Self on the point guard situation: “I don’t want to play a point guard any more. Elijah (Johnson) was definitely our point guard the year before last. Naadir (Tharpe) was definitely our point guard (last year). I don’t want to do that. I want to play three guards and whoever gets it brings it. That’s how we always had our best teams. I want Wayne (Selden) to be able to play point guard; I want Frank (Mason); I want Conner (Frankamp); I want Devonté; I want Svee (Mykhailiuk) when he gets here. I want all these guys to be able to bring it so we are playing a bunch of combo guards that can all play point as opposed to just playing a point guard. Up ’til the last five to seven minutes (when you need what he called a ‘closer’) I hope we have three point guards out there at once or at least the appearance of three.”

This, that: KU sophomore forward Landen Lucas bumped his knee Monday and is ticketed to miss a day or two of workouts and pick-up action, Self said. ... KU soph Mason did a series of five backflips for Self’s campers. “In the NCAA (practice) he did three in a row then dunked it,” Self said. ... Self said NBA representatives of the Cavaliers, Bucks and Sixers all have been to town to talk about Joel Embiid and Andrew Wiggins. “From what I’ve heard, they all have a chance to go in the top three,” Self cracked. ... Self said Mykhailiuk would be playing for Ukraine’s junior national team then hopefully work out with the senior national team, which is coached by Mike Fratella and assisted by former KU coach Bob Hill. He could arrive at KU as late as September if he plays for the national team. “I know he’s in the gym, no question about that,” Self said. ... Self was happy with his two spring signees — Mykhailiuk and Graham. “What we got was more of the (KU) needs than even getting the big kid from Texas (Myles Turner),” Self said. “He (Turner, UT) is going to be a terrific player, but I felt if we could get an unbelievable shooter and true point guard I think that would probably offset maybe not having so much standing height inside.”

Self on the point guard situation. That is so good to hear. Until Sherron in '08-'09, it was that way for his teams. It will put the other team at a disadvantage, because some SF isn't going to be accustomed to defending "the PG".

Seriously, Self can't keep any of this straight himself, with all the combo guard, point guard, lead guard talk.Here's an example -

Self said about Graham the following: But, of course, he said this of Devonte Graham: “He may be as talented a lead guard as we’ve had in a while, probably since Sherron (Collins) from an overall talent standpoint,” Self said of the 6-foot-2 Brewster Academy player, who is ranked No. 36 in the recruiting Class of 2014 by Rivals.com. He has a presence on the floor. We think he has great intangibles. He is quick, can do a lot of things. He can score the ball. He is probably more a lead guard than a true point guard, which is fine because the best teams we’ve ever had, we’ve played without a true point guard. We played with two or three lead guards. He’s probably a cross between Russell (Robinson) and Mario (Chalmers) from a size standpoint and length and athletic ability,” Self said.

Then, Self says in the article above, again referring to Graham:

“What we got was more of the (KU) needs than even getting the big kid from Texas (Myles Turner),” Self said. “He (Turner, UT) is going to be a terrific player, but I felt if we could get an unbelievable shooter and true point guard I think that would probably offset maybe not having so much standing height inside.”

All any of this really means, in my opinion, is that he is more comfortable when he has more than one guy that can handle the ball like a point guard in the game at the same time.

Self has always talked using multiple CGs and has the -08 team as a model. The big question remains; Who will emerge at the 3rd guard behind Selden and Oubre/Greene?

Fall classes commence August 25th and we are not expecting Svi until sometime in September. Why was it a bad idea for Wiggins to play for the Canadian Team last summer, needing to get to Lawrence...and a good idea for Svi to play for the Ukrainian team, not needing to get to Lawrence? If Svi want to play at all this year, he should probably think about getting to Lawrence asap. He's falling behind. Perhaps Self knew Wiggins would play a ton of minutes and needed some sort of break whereas Svi will watch similar minutes from the bench.

Really happy to hear Self's comments about losing that guy to UT. I always felt he needed us a lot more than we needed him. UT is going to be a tough challenge and will undoubtedly hinge on our ability to defend and take care of the ball.

I think that you pretty much nailed it on Svi. Wiggins as a guaranteed OAD was critical to the success of the KU team last year and having him on campus for at least part of the the summer was important for team chemistry. He also had only one chance to rest his body because of pre-draft training and he'll be playing all July after the draft. I don't remember whether Wiggins took summer classes or not for part of the summer, but I remember that he was home in Canada for at least half of the summer it seemed. I think that he was on campus for one session of summer school.

Svi is not as critical to team success this year as Wiggins was last year. Svi could probably have benefitted from training at KU and getting to know Andrea Hudy, but skills wise he'll get much more coaching and more drilling playing for the Ukraine National Team than the NCAA allows student athletes during summer school.

1] Svia is going to be playing with men, though probably not as skilled as the KU guys, but certainly older and stronger and probably crankier...he will probably take a real beating which will translate well when he shows up in Lawrence.

2] I guess Bill has christened Mykhailiuk...from hence forth he will be "SVEE".

4] Multiple guards, yep right Bill, whatever you say......we'll have a designated point guard by the second exhibition game..wait and see [or Svee :) }.

5] They damn well better play at full speed if they think they want PT in Bill's system.....oh by the way, you new guys...defense first!!!!

Self's comments on point guards is coach-speech as rationalization.

If any of the combo guards clearly elevate above the rest, we will have a true point guard. If that happens my money is still on Graham, but I’m guessing for at least this year, nobody will be so far ahead that others won’t get plenty of opportunities.

That's some good news on the point guard situation!