Sacramento Kings guard Ben McLemore, who returned to Lawrence to speak at Bill Self's basketball camp on Monday at Horejsi Center, answered the campers' demands and put down a 360 dunk. 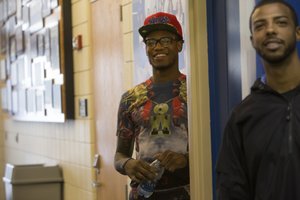 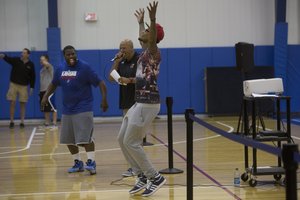 Still a kid at heart, 21-year-old NBA jumping jack Ben McLemore heeded the requests of a throng of young Bill Self basketball campers, who chanted “360, 360” at the 6-foot-5 Sacramento Kings guard Monday in Horejsi Center.

Camp guest speaker McLemore, who jumped over Shaquille O’Neal to complete a remarkable jam at the NBA’s Slam Dunk contest at All-Star weekend, flushed the 360 to the delight of hundreds of campers who accorded the second-year Sacramento Kings player a standing ovation.

His full day of activities will culminate in a slam dunk competition that night at East Lawrence Rec Center.

“I’m having a great time. It’s good to be back at Kansas, to see all my friends, coaching staff and these guys (campers) and getting my classes going,” said St. Louis native McLemore, who is enrolled in summer school at KU as he pursues a college degree.

McLemore, who has been in town for a few weeks now, has been working out on his own and also playing in pick-up games with KU’s current basketball players.

“I want to see how that gym is going to be in practices and stuff with all this talent,” McLemore said. “Don’t get me wrong, there was a lot of talent last year. There is even more talent coming in. These guys are definitely impressing me. I think it’ll be a good year for them.”

McLemore, who wore an old-school “Kings” hat which flipped off his head on his 360 dunk Monday, had words of praise for another ultra-athletic player — KU sophomore-to-be Wayne Selden, a 6-5, 230 guard from Roxbury, Massachusetts.

“Wayne is looking good. After that surgery he is definitely getting his bounce back,” McLemore said of Selden, who has fully recovered from offseason arthroscopic knee surgery. “He’s always been in attack mode, but just the energy. He’s starting to take over now. His shot is getting more consistent.

McLemore was willing to discuss the play of three of KU’s freshmen newcomers who are in summer school.

Of Kelly Oubre, 6-7 from Findlay Prep in Henderson, Nevada, McLemore said: “When we first started, I didn’t know he was left-handed. Once he gets down how to play the game and the system, he’s definitely going to be good. He can shoot the ball.”

Of Cliff Alexander, 6-8 1/2, 240 from Chicago’s Curie High, he said: “He’s a big guy, man. He can do a lot of damage on this college level and also with this program he can help a lot. The big body that he has, the athleticism, he’s going to be good.”

Of Devonte’ Graham, 6-2 from Brewster Academy in Wolfeboro, New Hampshire, he said: “That’s one thing, he can shoot the ball. He’s fast. To be that small, he’s pretty long. He’s a good defender, stays in front of his man pretty well.”

McLemore addressed a variety of topics with the media and the campers.

Of his one-day summer event in Lawrence to raise funds for the fight against childhood hunger, he said: “It’s something I thought of to be part of for the people of Lawrence. Everybody can have fun and just enjoy it.” The day includes a “Brunch with Ben” and a basketball run and dribbling event down Mass Street.

Of getting dunked on by LeBron James in a video that went viral last season, he said: “It wasn’t that bad. I mean that’s LeBron James, right? Everybody in the league gets dunked on once in a while. I was making a basketball play at the wrong time. At the same time, I had fun out there playing against one of my role models. I felt kind of bad after I was getting texts and pictures of me getting dunked on by LeBron. He told reporters he hated it had to be me, but at the same time, it’s basketball.”

On James being one of his childhood idols: “I was trying to mimic my game just like his. LeBron and Paul Pierce, another guy from Kansas, are two guys I looked up to. Just the little things they did.”

Of Joel Embiid’s chances of being a dominant NBA center: “If he keeps working he can definitely be. I think Joel has that potential to be great, one of the best kids in the NBA. Not too many freshmen show a showcase like that early in a season like that. He definitely did it early.”

Recruiting: Daniel Giddens, a 6-10 senior-to-be from Wheeler High in Marietta, Georgia, will announce his college choice on July 3, JayhawkSlant.com reports. The No. 26-rated player in the Class of 2015 has a list of KU, Arizona, Florida, Georgia, Indiana, Ohio State and Texas A&M. Ohio State has been called the heavy leader.

McLemore shot 37.6% from the field last year including only 32% from the three point line. Maybe he should focus more on his jump shot and less on his dunking if he wants to have a long career in the NBA...

I really wish there was a thumbs down option for comments...

I didn't know that he wasn't working on his jump shot. That's not good.

I don't remember Ray Allen being north of 40% from 3 early in his career either. As Ben gets more experience and learns the what a good shot in the NBA is, and yes it's different than the college game, McLemore should be 40%+ 3 point shooter for many years.

Not trying to be a Richard, but to just post season stats for a rookie and make a statement like that is lazy and uninformed. Been struggled for the first half of the season(like a lot of rookies) but he really played well the second half of the season. That won't show in the stats you looked up right before your post though. Do some REAL research before posting, or better yet just follow the players from KU in the league and you'll be more informed.

There aren't too many people making a salary of $3 million+ a year that are still actively working a degree. Good for McLemore!

maybe he promised his mom, I thought I saw that Pierce finished his as well as Drew Gooden and J Wright. I am not sure about other recent jay hawks. I know Vince Carter did

Jeff Darby shot 00.0% from the field last year including only 00% from the three point line. Maybe he should focus more on his own life instead of criticizing a 21 year old professional athlete making $3,000,000 a year and is also pursuing a college degree....

C'mon, guys..we're all Hawks here....I defy any of you to deny that maybe just a little bit of Jeff's comment crossed your minds. As a fellow St.Louisan, I've been boasting BenMac on this site since his sophomore year at Wellston High School, but I too hope he is working hard on his jumper.

I get a charge every time a college athlete that hits the big time comes back and gets their degree..even Dookies.....no need to worry about Kentucky.....no one ever comes back!!!

It is so gratifying to hear how all these stars rave about Lawrence and KU. I only make it back about twice a year but each time is great...even with a wind chill of -35!!

PS Anyone that wants to criticize Ben, just take a look at the faces of those kids in the picture above!!

His jump shot is picture perfect, %'s will increase as his comfort level on the floor increases. I think that we all know that the kid is getting up plenty of reps in the gym day in and day out. My earlier comment... obvious sarcasm is obvious. I hope that he returns to walk down the hill after he completes his degree in the coming years, unless of course he's in the playoffs.