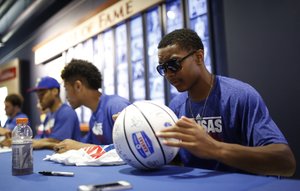 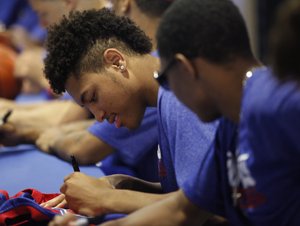 Kansas newcomer Kelly Oubre signs a jersey for a basketball camper along with the rest of the Jayhawks on Sunday, June 8, 2014, at Allen Fieldhouse.

It’s been a whirlwind for the 6-foot-8 1/2, 240-pound Alexander, who is enrolled in summer school at KU and thus has already started his college adventure.

He was referring to reaction to his prom attire — a gold tux with black trim, black shirt, black bow tie and sunglasses. He also looked rather distinguished in his Curie blue cap and gown, pictures of both occasions displayed on mom Latillia’s Facebook page.

“Talking to my mom and dad ... they are just very excited to get me down here,” Alexander, Rivals.com’s No. 4-player in the recruiting class of 2014, said of KU. “There’s really nothing to do back home. (I) just want to get away, get a feel of something new.”

“(I’m) just getting to know everybody, getting a feel of campus and building a great relationship with my teammates,” Alexander said.

His goals this summer?

“Get stronger, get faster, get better,” he said, noting he must work on, “a consistent jump shot and post moves.”

Alexander arrives after a senior season in which he averaged 24 points, 15 rebounds and six assists a game for Curie High.

“One word ... power,” the McDonald’s All-American exclaimed, asked how to characterize his game.

KU coach Bill Self would agree with that assertion.

“He’s a guy who will definitely attack the rim,” Self said Sunday at camp. “I’d say right now he is a hybrid. He’s a post that can play away from the basket or he’s a 4-man that can post. He’s kind of both of those guys. He’s certainly got some work to do offensively and defensively ... but offensively, as far as developing some go-to moves because he’s used to being more athletic than people and overpowering them. Of course, at this level, he won’t be able to do that quite as easy.”

Self was asked if Alexander reminded him more of former KU forward Thomas Robinson or ex-Jayhawk forward Darnell Jackson.

“You know what ... I think they are both pretty good comparisons,” Self said. “I think he’s a little bit further along than both of them, a little more advanced than both of them at the same stage. I’d say there are similarities body-wise and how they both went after the ball. I think we’d be very fortunate if we could keep Cliff here three years like Thomas or four like Darnell. I probably don’t see that happening. Hopefully he’ll play well enough he can make that decision at a later date. We’re all excited about him. He’s a great kid. He’s hungry. Certainly we need his presence inside.”

Asked how long he’ll play at KU before heading to the NBA, Alexander stated Sunday: “I am not sure. It depends ... depends on how I play. If I’m ready I’ll go, but if I’m not, I’ll stay.”

For now, Alexander, who is expected to be taken No. 2 in the 2015 NBA Draft according to draftexpress.com (behind fellow Chicagoan Jahlil Okafor), is focused on college, of course. He chose KU over Illinois, DePaul and Memphis.

“The place was crazy. The fans were going crazy,” he said of his campus visit to KU for Late Night in the Phog. “The other thing that stuck out to me was coach Self ... just his history with developing his players and getting his players to the pros.

“I was talking to Sherron (Collins, former KU guard from Chicago) at Late Night. Basically he was telling me, ‘You should come here because coach Self is a great guy.’ I kind of see it,” Alexander added with a smile.

He followed the Jayhawks’ fortunes in last year’s NCAA Tournament.

“I mean I was pretty upset when Stanford put ‘em out,” Alexander said of KU’s foe in its second NCAA Tourney game. “I paid close attention to them. They didn’t really have a good season last year, but hopefully we can change that around this year.”

He’s part of a recruiting class that includes No. 6-ranked Kelly Oubre, No. 36 Devonté Graham and five-star Sviatoslav Mykhailiuk.

“I’ve never heard him say it but hopefully it comes true if we come in and do what we need to do,” Alexander said of Self saying this could be one of his finest recruiting classes. “If we stay disciplined and do what coach tells us to do, I think we’ll be pretty good,” he added of the 2014-15 team.

This, that: Self on Sunday said all players are on campus for summer school with the exception of Ukraine’s Mykhailiuk, who will work out with his national team this summer.

1] When discussing his reasons for coming to KU, a nice touch by Cliff NOT to mention that, " Oh, by the way, my girlfriend is on the KU Ladies Team."

2] Kelly's Mohawk just made my #2 ranking for best team hair style right behind the perennial number one, Bill's Toup.

3] Personally, since he'll be on the same spot on the floor doing his thing, I still like to think of him as a power forward who can post up....however, if you've seen clips of him going toe- to-toe with Okafor..well, Cliff can REALLY post up!!!

4] Turg lost FIVE transfers this year??..WOW, they couldn't all of them been disappointed benchwarmers...what gives???

5] According to Rivals, KU's Class of '14 has three 5 stars and a high 4 star...damn...when is Bill ever gonna learn how to recruit. [Insert extreme sarcasm font at this point].

6] For all the talk about Svia's shooting, ball-handling, court awareness, potential, etc...P.T. will come down to, as it always does, CAN HE PLAY DEFENSE? By the way, is 6'-6" the final height for our young Ukranian?

7] How in the heck do my Cardinals lose 3 out of 4 to the Royals yet go INTO Toronto, the hottest power team in baseball, shut them out for 18 straight innings and win 2 out of 3 and almost sweep them????

8] Let me be the first to start the discussion...now that we know Wayne, Cliff and Kelly will be declaring for the draft next year, what fifth graders should we be recruting at the moment. [If there is any ink left, also insert extreme sarcasm font here as well!!]

4] Could it maybe have something to do with moving to the B1G this season? Not saying that it's the decisive factor in players transferring, and I don't know where the players are from, etc. but I would think that it could weigh in to the decision.

6] Svi was measured at 6'6" (shoes on) in April at the Nike Hoops summit and was recorded with a 6'6" wing span. Could still be growing however...

1) I think Alexander and his GF broke up awhile back.

7) Astros put it to KC. I really miss those Astro-Cardinal games. Moving the to the AL and change in ownership were a bad moves for Houston.

8) Although that trio is high on the mock draft boards, do we know for sure they will declare? I've not seen any comments to the end.

Suzi, I was taking poetic license in order to go for the big laugh :). I have absolutely no hard evidence that even Wayne may go, although that seems likely. I hope Cliff and Kelly hang on for two years...that would be great.

In fact, that may be why Bill is going to hold schollie #13 in his back pocket...Wayne may be the only departee next year.

Actually, Suzi, there are three teams with worse records [including Boston and Philly] and four teams with virtually the same record as the "Stros....have faith. The ex-Cardinal Player Development guy will get Houston righted long before the Cubs get a sniff of post season!!

Suzi, Jim Crane is not being the meddling owner that Drayton McLane was and is allowing management to build the Astros farm system and it's starting to pay dividends now. Management has also been smart enough to see they have a great manager in place in Bo Porter and have allowed him the necessary time while the prospects develop. There are 4-5 future all-stars in the majors now and George Springer looks like he'll be the AL rookie of the year. The Astros will be serious playoff contenders in the next 3 years. The biggest long term question for the Astros will be how high Crane will allow the payroll to go in order to keep some of these youngsters when they approach free agency. Will he bump it up over $100 million to keep most of those guys or will he be like the Royals owner and cheap out when top prospects hit free agency?

McLane put some really good teams on the field. With the #1 MLB Draft pick 3 years in a row, they should have talent. I hope Springer can keep it up and proves to be the real deal. I've been following Carlos Correa, Foltynewicz, Appel, McCullers, DeShields, Velasquez, etc. We will see what Crane does. Not having a competitive baseball team makes the Houston summers very long and seemly hotter.

McLane was also the single biggest reason why the Astros have had the past 3 top picks. In his quest to win a World Series, he and the GM's gutted the farm system to do so. When Jim Crane bought the team, he made restocking the farm system and rebuilding the Astros through that way. That way of rebuilding however does take several years to see any fruit from that method and it's just now starting to happen.

Biggio was my son's baseball coach at St. Thomas. We have gone separate ways the past couple of years but Craig spent a lot of time with the farm system and was always big on building up the farm system.

I'd like to request that your next installment of "The Oddities" comment on the Utah Jazz head coaching hire, and on the Cleveland Cavaliers coaching search.

I just saw that Cleveland offered Cal $80 million guaranteed and he said "no thanks".

I appreciate the request but the NBA holds exactly ZERO interest for me except for how our Jayhawks are doing.

Although I do have to admit that when I saw Utah had hired "Hair Boy", I almost peed in my pants with laughter.

All I can say is there are a lot of smart coaches out there who know Cav management is a trainwreck...three #1 lottery picks in four seasons may be just a small hint!!!

Why should Cal move? He's got the NCAA by the balls, is the bigest thing in Kentucky since Colonel Sanders... and he'll make more money under the table than he ever could in the NBA. Actually, he'd have to actually coach..something he's avoided his whole career at the college level. :)

The Jazz situation impacts B. Rush and the Cavs situation could impact Wiggins or Embiid!

I'll never forget the UDK centerfold in Quin's last visit to AFH. It was a picture of Donald Trump lambasting a defeated looking Snyder with "Hey Quin, You're program's in shambles and littered with scandals and you're hair is even worse than mine. You're FIRED!!!" (not a direct quote... based on my memory of the occasion)

Get right outta here with your Cardinal talk.

How does that happen? The Royals are a better team than yours.