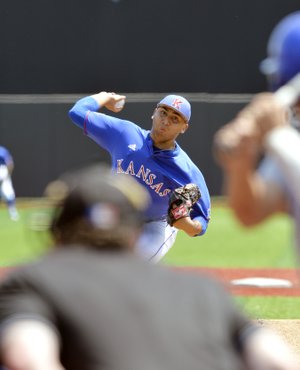 Louisville, Ky. — Kansas University battled back from an eight-run deficit, but the Jayhawks’ first NCAA Tournament trip in five seasons ended with an 8-6 regional setback to Kentucky on Sunday at Jim Patterson Stadium.

“When we got down early in the game, it was too early in the game to give up,” KU senior catcher Ka’iana Eldredge said. “We were down seven runs in the fourth, with so much game left to be played. As you saw, we made a run at the end and put ourselves in a position to win the game late. Fortunately for Kentucky, they were able to put up two more runs than us and that won the ball game.”

Though the Jayhawks held UK scoreless the rest of the way, they could only muster one additional run.

Eldredge homered to left in the eighth in his final collegiate at-bat — just the second home run of his career — to aid the comeback.

“So many things go through your head when you walk up to the plate late in a ball game and you’re down,” Eldredge said. “I remember thinking the same thing in high school: This could possibly be my last at-bat. You just have to go up there and have fun with it. I didn’t think too much, and I got a good pitch to hit and put a good swing on it. It was great that it went out of the ballpark so I can tell my kids my last collegiate at-bat was a home run.”

But the deficit was too much for Kansas to overcome.

“I made the comment yesterday that (Robert) Kahana didn’t get to pitch in the Big 12 tournament,” Kansas coach Ritch Price said. “It has been almost two weeks since he has been on the mound. We scrimmaged ourselves before we left, and he was actually pretty good. I was concerned … if he got off to a good start, I think you would have seen a completely different guy. Unfortunately for us, his command wasn’t very good, and he was behind in the count. Kentucky can really hit the fastball.”

“You look at the numbers of hits per innings pitched, and you look at his opponent batting average at .360 … we liked our chances,” Price said. “I think the thing was we got buried early, and I think it took us a while mentally to recover from that after they hit us in the mouth in the first and second inning. He commanded his fastball well and showed a good breaking ball.”

Kansas had the tying run at the plate with one out in the ninth, but two quick outs ended it.

“For the seniors, this was our first time in the NCAA Tournament,” Eldredge said. “It has been cool to be here and an awesome experience. We told the younger guys, ‘It’s all a learning experience.’ They know what to do and how hard to play going forward, and coach Price is going to have a lot more NCAA Tournament appearances if the young kids continue to work hard and have the passion for the game.”

Congrats on a good season!

Hear, hear! I'm proud of what they accomplished this season and how hard they fought in the playoffs. Hopefully this is just the beginning.

So proud of these guys. Am hoping this is only the beginning of great things. Rock Chalk!

at least we won one game....our arms just ran out of gas. counting the Big 12 tourney, in our last five games, we gave up less than 5 runs only once..and we still lost that game.

so too much pressure on our hitting to always have to six, seven runs plus a ball game to win.

this program is close to being an actual tough out program, but just can't seem to get over the hump. i would say this season was a success...probably over achieved, and Wes Benjamin going down really cost us. yes, we went 15-9 in the league and won our last nine, but then after that, we went 2-5.

we need more arms, and speed and power in the gaps...pressure needs to be put on the defense to make plays. the coach says he's excited about our recruiting class...if we can go back to back seasons post season, that would be good..and frankly, long overdue.

It was nice to see the success this year, but at the same time, it's sort of a buzzkill to be eliminated by Kentucky... Oh well, just another reason to hate them I guess!

One injured arm away from a possible Super Regional appearance.