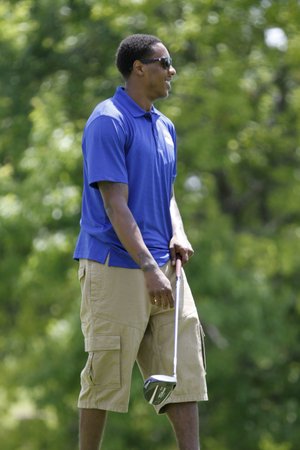 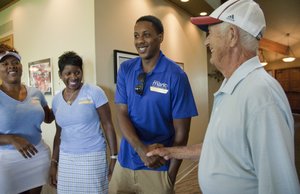 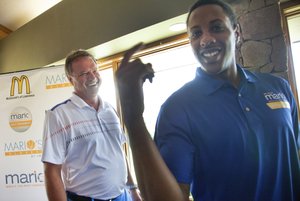 “You can’t replace a guy like that,” former Kansas University standout/2008 NCAA Tournament MVP Chalmers said Monday, referring to James, who led the Heat to two NBA titles in four years before electing to return to Cleveland where he started his Hall of Fame career.

Chalmers, who recently signed a two-year contract extension with the Heat, insists, however, it’ll “be fun” trying to make do without LeBron.

“It’s also a different challenge we’ve got to face, but you know we’re ready for it,” Chalmers said from Alvamar, where he was hosting his sixth-annual Mario V. Chalmers Golf Tournament and VIP Mixer.

Chalmers, who will make $4 million next season and $4.3 million in 2015-16, was asked why he re-upped with the Heat, the only team he has played with in his six-year NBA career.

“I felt comfortable being back there. I felt it was my opportunity to finally have my own team, to be on my own,” Chalmers said. “I do love it there. I could picture myself playing somewhere (else) if it happened. I’m happy in Miami. We still have got a long way to go. I’m only 28, and I’m still kicking.”

KU coach Bill Self, who was one of the 100 or so golfers to play in the scramble event Monday, praised his former pupil for his work in the Lawrence community. Chalmers’ foundation supports initiatives for breast-cancer research, treatment and awareness and also youth initiatives.

“Mario and his family have impacted our community in a big way, through Mario’s Closet (which provides items for cancer patients at Lawrence Memorial Hospital) and some other things since he’s been gone. He’ll always be a hero in this town,” Self said.

Chalmers said he loves giving back.

“People keep showing up and coming out and having fun. It’s good to have this back here in Lawrence,” he said.

“Seeing all the friendly faces that took care of me while I was here,” he added, asked the best part of returning each summer. “It’s always good to see them, see they still miss me.”

Self on Svi: Incoming KU freshman Sviatoslav Mykhailiuk scored 17 points off 6-of-17 shooting (1-for-4 threes) in Ukraine’s 79-77 win over Denmark on Monday in the Under 18 European Championships in Sofia, Bulgaria. He had six rebounds, six turnovers, three steals and no assists while playing 30 minutes for Ukraine (5-0).

“He’s a good player,” Self said of the 6-7 wing. “From what I understand, the competition is at least above average. He’s a talented kid. Of course he’s young (17), green and not strong yet. I think our fans will be very excited once he gets here.”

That could be in early September.

“I talked to coach Fratello (Mike, Ukrainian National coach) ... the plan is, after he completes this event, he will practice with the national team,” Self said. “If he makes the national team, he’ll stay and play. If he doesn’t, they’ll probably keep him over there as long as they can and get him back to school somewhere right around the first of September. It’s a great opportunity to be trained by ex-NBA coaches and present NBA coaches with the national team.”

Recruiting: Self and his staff were on the road recruiting three of the four weekends in July.

“I think we got some things accomplished. We’re in on good kids. Whether or not we can close remains to be seen. I like the kids we’re in on,” said Self, who can’t discuss specific prospects in accordance with NCAA rules.

As far as the new recruiting model that’s been in effect the past couple summers, Self said: “They tinkered with it for years. The way it is now (weekend recruiting) is easy on coaches but still hard on kids. Kids are worn out. They are playing too much. I think you’ll possibly see some kids lighten the load moving forward because it’s actually too much for kids. You are having a lot of kids get injured when they get tired.”

Injured Jayhawks: Self said Kelly Oubre (ankle sprain) would likely miss one more week of pick-up basketball action, while Cliff Alexander (ankle sprain) will likely sit out two more weeks. Each has been in a walking boot the past couple of weeks after sustaining sprains.

This could be a very thin recruiting class for KU. Realistically, this year will be a 2 -3 man class with Alexander and Selden likely gone and Oubre being a possible OAD. Nobody stands out as a transfer candidate at this point. It's also possible that KU ends up with just a one man class. I don't really expect to hear anything significant recruiting wise until after 2015 starts just be because of the uncertainty with who's coming back and the proliferation of HS kids wanting to be package deals.

The latest 2015 NBA Mock drafts have Oubre, Alexander and Selden (3,5,10) going in the lottery with Ellis also going in the first round at 28. With one already open, it seems like Self would be prudent to plan signing 3-5. However, those coming in will find some tough competition for PT. Svi and Greene (7, 11) are projected lottery picks in 2015 and Mickelson in the second round. The other guys ... Graham, Mason, Frankamp, Lucas, and Traylor are no pushovers.

My bet is Self is going hardest for bigs such as Brown, Diallo and Rabb as '15 signees.

Suzi, Svi won't be a lottery pick in 2015, as he won't be eligible for the draft until after he has played 2 years at KU because of his age. If you meant the 2016 draft, then that is possible. If the NBA modifies the age limit beyond 19, he will be here a minimum of 3 years.

Jeffrey, your right, my error...Sri and Greene are on the 2016 draft boards www.nbadraft.net/2016mock_draft

My opinion is if Frankamp and Greene dont see significant minutes one or both will look to transfer.

Totally disagree . Greene will get his minutes and Frankamp is a smart kid and seems patient enough to know he'll get his chance in time. I expect him to be at KU 4 years and make an impact his junior and senior season ala Tyrel Reed.

Well Dale if you look around there are plenty of "rumors" saying Frankamp and his daddy werent/arent happy and he was considering transferring. He wont spend 4 yrs on the bench. So, all I said was IF they dont get minutes....one or both could leave.

Why would Greene leave? He may not start but he'll get plenty of PT. Things are shaping up for him to have a big 3rd year ending with lottery projections (see above link). With those results, 3-Done lottery pick,I would expect Greene would be very pleased with his college selection.

As for Frankamp, he'll get his time this year. From the start, everyone was looking to his Junior/Senior years as significant contribution years. Many thought he'd even have a redshirt year. As for transferring, Frankamp and his dad were completely justified to look around, considering the PG problems we had last season. Then to cap it off, the Stanford game. In retrospect, Self should have given him the ball to start the second half. Mason played well but was 0-5 from the field and everyone missed the bunnies he set up for them.

Im sorry, but I personally like the bulldog/attackdog type of PG like Sherron/Tyshawn/Mason, over a steady-eddie type like Frankamp. The issue with Frankamp is that he is a scorer. If he doesnt get his touches or his looks, he will be unhappy.

Basic human psychology: All he ever did in highschool was score-at-will, even beating Perry Ellis' Wichita record. Does anybody think he will be content to "just distribute" the ball. That whole concept almost drove Russell Robinson outta here, but somehow Self convinced that bigger, tougher, more athletic dude to stay.

Nothing against Connor Frankamp, but I am really curious why Self recruited him to KU, knowing Self prefers his big, fast, rangy athletic types. He also likes the "ornery" attack-dog type of PGs. This is why Mason will start, and incidentally, is the exact area where EJ differred from Tyshawn and Sherron... Mason is 190+, while Frankamp is 160+/-. Physicality and such a mindset goes beyond weight, or size, or FG%. I simply see Mason as the best "fit" for Self team OVER Frankamp (suspect in all areas other than a:t ratio), and OVER Graham (too inexperienced to run the show). Self never seems to start 1-dimensional players like a Brady Heslip (pure and deadly 3shooter, but would never start for Self). Nor does Self start defensive liabilities (partly why EJ didnt start as a frosh).

It would serve Connor (& his dad) to have a realistic, sit-down discussion with HCBS about his chances. The kid would start for almost any MVC team, and likely be a bonafide star for a D2 school. At the D1 level, Frankamp will always face someone bigger, stronger, faster than himself, especially in a royalty program. Simply impossible to outcompete all comers. Self, who is a master of percentages with his "high-percentage-system" knows this...but will he be brutally honest with Connor & the Frankamp family?

Conner Frankamp could be the 6ft version of Micah Downs (6'5), who was simply a tall wafer. Bean-pole with hops. But he was promptly outcompeted by his KU teammates, thus transferred. Same thing is happening to Connor Frankamp.

Suzi...here again, all I said was if he doesnt get significant mins, Greene could look to leave. The kid was a top 35 or so recruit and if that means no real PT in his 2nd yr, and theres no guarantee for his junior season if we get another wing, he may choose to look around.This is all just my opinion.

Scott, Greene will not leave he will get minutes this season. He did not play like a top 35 recruit last year.

I saw Frankamp as a T Reed. or C Teahan type, but was disappointed in how many 3 point shots he missed. All I heard was how much a dead eye shooter this guy was, I watched him win a 3 point shooting contest in New Orleans too. He was a non factor last year due to his shooting to me. We can handle his defensive liability, which there is as Erich notes, if he hits 2,3,4+ 3 pointers a game when he is in there. Last year after he missed one or two he would not shoot even when he was open. I understand their frustration but a lot of that was on the player to me.

SCOTT---Green is not going anywhere, and he will be a very important piece, of what will be a very, very, good team, with Final Four Potential.