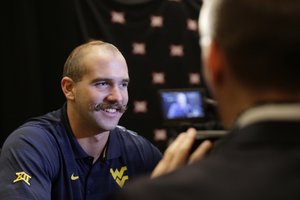 Dallas — A junior punter for West Virginia, Nick O’Toole has heard his share of verbal insults spewed from fans in nearby seats. Such is the life of a college football player, particularly on the road.

O’Toole, on Tuesday at Big 12 football media days at the Dallas Omni Hotel, said one taunt in particular stood out from the Mountaineers’ trip to Kansas University in 2013.

Late in what turned out a 31-19 KU victory — which ended a 27-game conference losing streak and proved to be the Jayhawks’ only Big 12 win of the season — the mustachioed punter made out a barb from the bleachers: “You guys are losing to Kansas!”

Standing next to WVU kickoff specialist Michael Molinari, O’Toole recalled turning to his teammate to say, “Oh my god. This is awful.”

The outcome, the junior said, was part two of a three-game skid to close the season, once the Mountaineers were eliminated from bowl-game contention. They finished with a 4-8 record.

“It was definitely a shock, even to Kansas fans,” O’Toole said. “We heard them in the crowd. That just puts an even bigger chip on our shoulder.”

Sophomore defensive back Daryl Worley said the low point in Lawrence hasn’t been brought up much since.

“It wasn’t discussed that we were the only team that lost (to KU),” Worley said. “It was more discussed that it was the end of the season and it wasn’t going the way we planned, so people were kind of less motivated.”

West Virginia will play host to KU on Oct. 4.

A popular interview subject at media days, first-year Texas coach Charlie Strong fielded questions on everything from recruiting to the pressure that comes with his new position.

During his morning news conference, one reporter asked Strong about becoming the first black coach of any men’s team at Texas.

“I say this,” the Longhorns coach responded, “there’s tall shoulders that I stand on, and there’s people that have paved the way for me, and I’ve been given this opportunity. It’s been a great opportunity. But it’s because of a lot of hard work from other people, also. And I’m just so fortunate to be in the position.”

The new coach said he doesn’t look at his new gig as a pressure situation, because, “I know if you prepare, you have the right preparation, then you’re going to overcome all type of pressure.”

This offseason, Oklahoma became the new home for highly touted wide receiver Dorial Green-Beckham, who was dismissed from Missouri. Sooners coach Bob Stoops said an appeal to allow Green-Beckham to play this season is being processed.

One of the top recruits in the nation coming out of Springfield, Missouri, Green-Beckham caught 59 passes and 12 touchdowns in his 2013 sophomore season at Mizzou. But after an investigation into an alleged physical confrontation with a woman, Tigers coach Gary Pinkel removed the receiver from the program.

Stoops explained why OU wanted to add Green-Beckham to its roster.

“Through extensive conversations with the people at Missouri and our people,” Stoops said, “it was something that we felt the person that he is, the potential that he has as a young man and as an individual, that we felt the opportunity to give him a second chance at our place could serve him well and be great for his future, and (we) believe in him as a young man and what he’s able to maybe continue to become.”

Bill Snyder first took over at Kansas State in 1989 and coached 17 seasons before stepping down, following the 2005 season. He returned to the sidelines in 2009 and, entering his 24th season, owns a career record of 178-90-1.

The Oklahoman’s Berry Tramel did the math, and since K-State first hired Snyder, the other programs in the Big 12 have had 48 coaches.

“When you hear stuff like that thrown out by people like us,” Tramel asked Snyder, “does that make you feel old, and how do you sort of fight against the age thing and keep coaching at such a high‑pressure, high‑intensity job that you’ve got?”

Snyder’s response: “Well, I don’t pay much attention to what the turnover ratio is from one school to the next. And there’s a variety of different reasons. Sometimes people move on.”

Snyder will turn 75 this October.

“The age factor, I can’t negotiate that. It is what it is,” he added. “And I’m as old as time, and that’s not going to change.”

“Through extensive conversations with the people at Missouri and our people,” Stoops said, “it was something that we felt the person that he is, the potential that he has as a young man and as an individual, that we felt the opportunity to give him a second chance at our place could serve him well and be great for his future, and (we) believe in him as a young man and what he’s able to maybe continue to become.”

Translation: He's great at catching passes, so naturally we'll overlook everything else. Now if he was a scrub player, we wouldn't even CONSIDER adding someone with such low character ...

Anyone ever see the end of El Cid? K-state reminds me of that movie.

What Stoops meant to say was....... "The kid is a freak athlete who is better than any of our receivers. We can never have enough play makers and regardless of his past transgressions, his talent was too much to overlook."

What does it say about our fans when even they are taunting teams about losing to Kansas?