Golden State Warriors' Andris Biedrins, of Latvia, left, and Brandon Rush smile as they walk down court during a timeout in the fourth quarter against the Sacramento Kings in an NBA basketball game in Sacramento, Calif., March 13, 2012. The Warriors won 115-89. 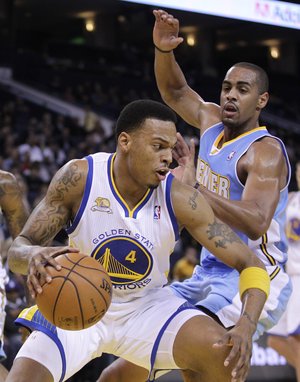 The Kansas City, Missouri, native, who started for KU’s 2008 NCAA title team, will hold the option in the second year of the deal.

Rush, 29, averaged 9.8 points and 3.9 rebounds for the Warriors in 2011-12. He tore his left anterior cruciate ligament in the team’s 2012-13 home opener, then was traded to Utah in the summer of 2013. Coming off knee surgery, he played in 36 games for the Jazz last season before becoming a free agent.

“Ppl just don’t know what I been thru the last 14 months. #soblessed,” Rush wrote Wednesday on Twitter.

Rush’s agent, Mark Bartelstein, told the Associated Press that the Warriors inquired every day about Rush once free agency began on July 1.

“That type of persistence paid off,” Bartelstein said, adding that Rush’s knee is now 100 percent.

“The second year is when you get your game back. That first year you’re really trying to survive,” Bartelstein said. “He’s worked really hard to get back and is excited for the opportunity.”

Rush worked out for several NBA teams earlier this week in Las Vegas.

He was selected No. 13 overall by Indiana in the 2008 NBA Draft and played for the Pacers three seasons before heading to Golden State in 2011-12.

Ford says KU sophomore Wayne Selden figures to be “late lottery to mid-first round” in the 2015 Draft.

Former KU guard Ben McLemore of the Sacramento Kings will hold his Sir McLemore Summer Slam from 8 a.m. to 2 p.m., July 26 in Lawrence. He will have a Breakfast with Ben from 8 to 9:30 a.m. at Ladybird Diner, 721 Massachusetts; an autograph-signing session from 9 to 11 a.m. in South Park; and a slam dunk contest with KU players from noon to 2 p.m. at the Community Building, 11th and Vermont. To register go to http://ljw.bz/1mHULQz

Former KU guard Mario Chalmers of the Miami Heat will hold his annual golf tournament and VIP mixer Monday, July 28, at Alvamar. The shotgun start is 1 p.m., with the mixer to begin at 6 p.m. For information go to http://ljw.bz/1l5VSGQ

Tweeting away: Former KU center Embiid continues to stir up the masses on Twitter.

After failing to recruit LeBron James to his Philadelphia 76ers, Embiid offered this recent tweet to Kim Kardashian: “Hey I want you to come slide in my DMs (direct messaging) @KimKardashian”

Shortly after, he apologized with this tweet: “Oh I didn’t know you were married sorry @KimKardashian just saw it from the fan’s tweet... have a nice day.”

He concluded with the tweet, “I must go on another break peace.”

Full recovery expected: Embiid’s surgeon, Richard Ferkel, tells the Philadelphia Inquirer that the 7-footer should recover fully from recent surgery to repair a stress fracture in the navicular bone of his right foot.

“Once he’s fully healed, his chances of having a long career are very good,” Ferkel told the Inquirer. “There’s no reason he shouldn’t have a great NBA career and be very successful. Once this heals, hopefully this won’t be an issue for him in the future.”

Embiid is in the midst of a six-week stretch during which he cannot put any weight on the foot. From there, he’ll wear a boot and train both in a swimming pool and on treadmill. After 12 to 16 weeks, he’ll start running.

Ferkel told the paper a five-to-eight-month rehab period should have Embiid on the court in late February at the latest.

“It’s certainly possible that he could come back this season,” Ferkel said.

Robinson done in Vegas: The Oregonian’s Mike Tokito reports Thomas Robinson tore a ligament in his right thumb Tuesday during Portland’s summer league game in Las Vegas and the former KU power forward will miss the rest of the summer session.

During the third quarter of the Trail Blazers’ win over Atlanta, Robinson tried to break a fall and ended up hurting his hand in the process.

Happy for you Brandon. Hope you can stay healthy. Great franchise. Rock Chalk!

As for Joel - it's time you learn that Twitter is a loaded gun. If Jim Rome is talking about your Tweets on his radio show, it's probably time for you to get off Twitter. It's a loaded gun.

Joel, before you hit send, walk away for a minute, then come back. Brandon, great news.