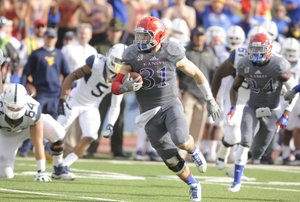 Kansas linebacker Ben Heeney runs back an interception just shy of a touchdown against West Virginia during the fourth quarter on Saturday, Nov. 16, 2013 at Memorial Stadium.

Kansas University senior linebacker Ben Heeney was named to the 2014 Preseason All-Big 12 football team as selected by members of the media and announced by the league office on Wednesday.

Heeney, who was an All-Big 12 Second Team selection in 2013, is heading into 2014 as the conference's leading returning tackler. Last year the Hutchinson, Kansas native recorded a team-high 88 tackles and finished fourth in the conference with 8.7 tackles-per-game. Heeney also recorded double-digit tackles in six of his 10 games in 2013 and is one of six active linebackers with 200 tackles and 20 tackles for loss in the last two seasons.

Heeney's selection to the All-Big 12 team comes on the heels of six other preseason awards he has garnered in 2014. He was named preseason All-Big 12 First Team by both Athlon Sports and Phil Steele Magazine, and was selected to the preseason watch lists for the Chuck Bednarik, Butkus and Rotary Lombardi Awards, as well as the Bronko Nagurski Trophy.

The annual Big 12 Football Media Days will be held in Irving, Texas, on Monday and Tuesday, with Kansas taking part on the first day. Heeney will be joined at media day by wide receiver Nick Harwell, tight end Jimmay Mundine and safety Cassius Sendish, all of whom are seniors.