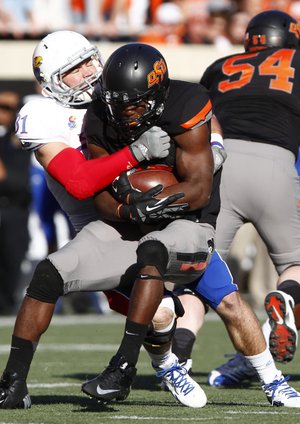 The Rotary Lombardi Award and the Butkus Award are members of the National Collegiate Football Awards Association (NCFAA) and are presented to outstanding players on the field at their respective positions. Specifically, the Butkus Award recognizes the most outstanding collegiate linebacker, while the Rotary Lombardi Award pays tribute to the college lineman of the year, including linebackers who set up no further than five yards off the line of scrimmage.

A senior from Hutchinson, Heeney missed two games in the middle of conference play in 2013, but still finished with a team-best 88 total stops, including 11.5 tackles for loss and the first three interceptions of his career. Heeney, honored as an All-Big 12 Second Team selection by the Associated Press and the conference coaches last season, was fourth in the conference with 8.7 tackles per game and ranked fifth in tackles-for-loss per game with 1.15. He reached double figures in tackles in six of his 10 games played, including four Big 12 contests.

In total, Heeney has racked up six preseason honors this offseason, leading up to the 2014 opener against Southeast Missouri State (Sept. 6) at Memorial Stadium. Heeney was named preseason First-Team All-Big 12 by both Athlon Sports and Phil Steele Magazine.