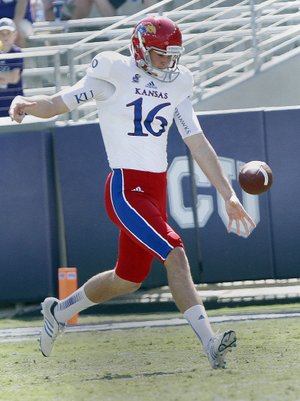 Another Kansas University football player has his name on a national award watch list.

The latest Jayhawk to welcome preseason expectations is senior punter Trevor Pardula, named by the Augusta Sports Council as one of 25 players on the initial 2014 Ray Guy Award watch list.

Pardula, a native of San Jose, California, earned honorable mention All-Big 12 honors in 2013 after booting 24 punts of more than 50 yards, including a career-best 78-yard punt. He averaged 43.7 yards per kick, placed 25 punts inside the 20-yard line and concluded the year atop the KU record books in punts in a season (84) and single-season punting yards (3,668).

In 2013, Pardula was named to Phil Steele's Midseason All-America Team, and earned national recognition for his performance in KU's win over Louisiana Tech, as he was named the Ray Guy Award and Big 12 Special Teams player of the week, and College Football Performance Awards punter of the week.

David A. Smith 7 years ago

This cat has a shot at a great season. Dude can boom that pigskin.

Now KU needs a Field Goal kicker that can hit field goals for more than 40 plus yards out like it was a piece of cake walk at the park. KU could end up at 8-4 this year.

2 punts per game over 50 yards, and 2 per game inside the 20. Amazing. I realize he had a lot of attempts but imagine what his average would’ve been if we had a kicker who could hit 40-50 yard field goals. He wouldn’t have had to lay up so often to avoid the touchbacks.

If we do have that field goal kicker, and If Pardula manages to eliminate the occasional 10 yard punt off the side of his foot, he’ll be All-American.