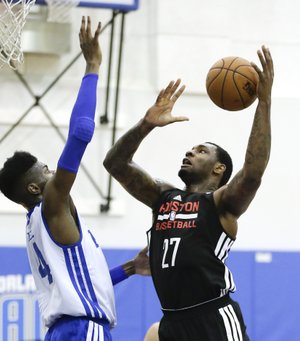 He went 2-of-4 from the field and 3-of-4 from the free-throw line while starting and playing 25 minutes. Black also had five turnovers and seven fouls — summer league rules don’t include the normal disqualification after six fouls.

Black and the Rockets play again Thursday in Orlando before heading to Las Vegas for their Vegas league opener on Saturday.

It has really been fun watching him play. Even though he was only with us the one season, Tarik is one of my favorite Jayhawks.

Agreed. Even though he was only here for one season, he had the heart of a true Jayhawk. He wasn't afraid to let people know it either. Miss his personality. Nothing ever knocked him off his horse.

Black has been working hard and getting noticed at the camp. It may not land him on an NBA roster this season, but it should be encouraging to him. He should be able to make a good living for himself playing the game.

If averaging 9 and 7 doesn't get you on the team then what does?

Can't wait to see him play next week in Vegas. Also, of course, will be that Wiggins guy who should get some attention. I was really hoping to see Embiid, but maybe he'll at least be there for support. Mario Little was playing on some team the other day and didn't fare very well. Amazing that the GA tickets are only 25.00 per day to see these games. Plus, there's that whole being in Vegas thing. I wonder if they have these games in the Sports Books?

I hope Tarik lands with somebody in the NBA. I was always impressed with his presence in the paint, his energy, and his hustle. I also like his character and personality. He will be an asset to any team he joins.