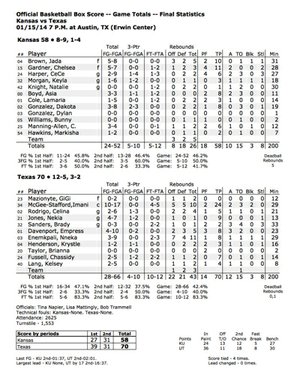 With KU losing by 17 points, 48-31, at 16:37 in the second half, freshman guard Dakota Gonzalez scored eight straight points as part of a 14-4 Kansas run that cut the lead to seven with with 11:33 remaining. Texas responded with a six-point run of its own, and kept a double-digit lead the rest of the way.

The Jayhawks host Baylor at 2 p.m. on Sunday in Allen Fieldhouse.

And the beat goes on doesn't it Mr. Kruse?

Horned Frogs and Long Horns and Bears, OH MY!!

So who is our coaching candidates?

KU and KSU women have 1 Big 12 victory each, both vs. Texas Tech. Maybe time for both coaches to go.