Kansas teammates celebrate a three-pointer by point guard Naadir Tharpe, center against Iowa State during the first half on Monday, Jan. 13, 2014 at Hilton Coliseum in Ames, Iowa. 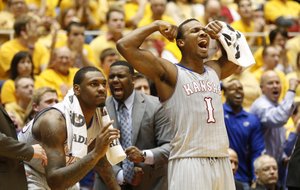 As it turned out, that ankle had very little to do with the outcome of KU's third consecutive Big 12 Conference victory, which came in the form of a 77-70 win over a scrappy Iowa State squad that led just one time all game.

Kane, a 6-foot-4 senior transfer from Marshall, who left last Saturday's loss at Oklahoma via crutches and was unsure whether he would even play against Kansas until sometime Monday, finished with 21 points, eight rebounds, four steals and three assists.

Early in the day, the point guard Tweeted a photo of his ankle in treatment and included the commentary, “ankle feeling good.”

After the game, he said he knew for sure that he would play about an hour before tip-off.

“They did a great job these past two days preparing me and getting me ready and I went out there and I played,” a dejected Kane said after the loss.

Despite solid all-around numbers, Kane shot just six for 13 during the loss and misfired on eight of 16 trips to the free throw line, including one air ball. As a team, Iowa State shot just 31 percent, including a 4-of-25 showing from three-point range, good for 16 percent.

Asked after the game how much of a negative impact the ankle injury had, Kane, who started, offered up an honest assessment.

“A little bit,” he said. “I really couldn't cut and I couldn't play how I wanted to play. But that's no excuse. I played and I played 37 minutes. I didn't do enough to help my team win.”

As for whether the Jayhawks could tell if Kane was limited because of the injury, freshman forward Andrew Wiggins, who finished with 17 points and a whopping 19 rebounds, said: “Toward the end of the game, when he fell down, yeah.”

That moment came with around four minutes remaining, as Kane appeared to re-injure his ankle leg but he later said it was just a knee to the thigh.

KU coach Bill Self said that incident was big for the Jayhawks down the stretch, because it prevented Kane from driving into the teeth of the Kansas defense with Iowa State needing three-pointers to get back into it.

In the end, whether the looks were clean or not, ISU's off-shooting night proved to be the biggest factor in KU taking an early stranglehold on the Big 12 Conference race.

“It was just one of those nights where we couldn't get anything to fall,” Ejim said. “And that's tough when you're a team that relies on shooting the ball. Sometimes you just have to shoot yourselves out of it.”

The 4th contender comes to the Phog on Saturday. It would be fabulous to personally put a loss into each of the wannabes to start the season. Wiggins also stifles another leading scorer - even if Ejim did get 15. Will he get Brown on Saturday, or get Self to let him take Smart? My guess is that Selden starts on Smart as he did on Kane, but also guess that they'll switch at times as well.

At least Iowa State can't use "We didn't have Kane available" as their excuse.

Great win. It looks like this team is coming together. They still looked shaky coming down the stretch. I really concentrated on how they handled possessions during the last eight minutes when we had a double digit lead. It was not pretty. Too many early shots, turnovers, and then some possessions where they didn't even get off a shot. That is a concern in future games. We were fortunate that ISU had a poor shooting night. I half expected them to get hot at the end.

I don't know why people continue to complain about officiating. Whether you like it or not there are new rules against hand checking and most of the fouls that were called were within the rules.

By the way, there is nothing classless about ISU fans. They probably have some of the best fans in the conference. They have one of the best game day environments in the league.

Finally, let's not get too cocky about winning the conference. We looked like we were going to roll through the league last year but had a mid season slump and ended up tying for the championship. It would be very nice to win the next two home games and be two games ahead of Baylor, OSU and ISU. I really wished WVU had beaten OSU on Saturday.

If they[ISU fans] are not classless, then they are some of the least knowledgeable fans anywhere. They boo even the most obvious calls against their team, something I'm proud to say does not happen in Allen where our continued excellence has promoted a better understanding among our fans of the game and how it is called. We complain about the officiating when the calls are inconsistent including the increased emphasis on hand checking. Secondly, with the exception of one quick poorly advised 3 by Wiggs, contrary to your comment Robert I thought we sometimes were to slow in initiating a play with the shot clock winding down. Quick shots in our offense are the exception, rather than the rule. We take fewer "bad shots" invariably than any one we play.

Sorry but Ku fans boo most calls against KU unless they are obvious. I did find it silly that ISU fans were booing calls made against ISU when there were only about 2 fouls called on them and we were already n the bonus.

Come on, not even comparable.

The thing that impressed me most was this team's ability to make plays. It has become obvious they are coming together and not just out there as 5 super individuals.

I am not sure how much of ISU's poor shooting was our defense and how much was an off night. We should know after they leave AFH.

I thought there were 3 separate occasions when there was contact under the new rule that should have been called against ISU on drives by Wiggins. Kind of upsetting when a guy gets mugged in the lane and it is no foul and some guy touches the point guard 30 ' from the goal and it is a foul. Something just not right there.

He's so vertical when he drives he's just an easy target for a strip. And I think everybody in the country knows what move is coming.

Jim, I agree with you an all accounts. Definitely seeing the team playing much more cohesively, and that includes Black and Traylor when they are in as well as Mason.

ISU was ice cold from the floor, but it didn't seem like it was the defensive pressure that was forcing errant shooting as much as self-imposed pressure of protecting home court on the big stage to prevent a crucial two game skid.

If I remember anything about last year it's the hot shooting early by ISU and by OSU against us. Sometimes guys come out with no pressure and shoot the lights out, and sometimes they come out cold.

I agree that at times it seemed that ISU was allowed to slap and hack at the ball as we were driving to the hoop. It seemed like we were not getting some of the calls that we deserved and it showed up at one point as we were 3-6 from the FT line and they were like 23 of 27.

Someone please explain to me how the team that pounds the ball inside all game shoots 19 free throws and the team that takes its game behind the arc, 25 times last night, shoots 34 free throws? Kane got the benefit of the calls all night. Wiggens goes to the cup off the bounce and continually gets bumped, hip checked while in mid air and seldom gets the call. The cyclone fans have zero objectivity with regard to how the game is called. Every call against the cyclones, even the most obvious, are booed, similar to how the mild cat fans react. We beat their 8 with our 5. I agree with a previous post that if Perry, who needs to be stronger with the ball on offense and rebounding the ball, and Wayne had had good games to combine with the excellent games of Joel, Andrew and Naadir we win by 20. What a difference 8 days[SDSU] makes. Rock Chalk.

Because ISU didn't just come down and crank up 3s. They penetrated and kicked the ball out in the second half. There are new rules and we need to understand what we can and cannot do.

I hate it when people complain about officiating even though I was frustrated at the end of the game as the clock never moved. We could have played smarter down the stretch. We got the win but if Kane hits all three free throws at the end, it is a 4 point game with plenty of time left. Hopefully we learned how to put away a game.

One thing that I think that we need to improve on is how we defend the 3 on 1 fast break.

We were 0-2 last night when defending the 3 on 1 situation.

I'd say that probably the best way to defend the 3 on 1 is for everybody to get back on defense.

If the 3 on 1 is run correctly there is no way to defend it. If we get back on defense as you suggest, then it most likely won't be a 3 on 1 and obviously that is the best way to defend it, once again to state the obvious.

Thank you for making my "captain obvious" point of the day even more obvious.

When you consider some of the inane posts on here sometimes it is hard to tell what is tongue in cheek from what is a naive, I don't understand the game comment. If your post was an example of the first, I apologize.

next time I'll have to lead with a disclaimer.

~Captain Obvious Observation of the Game~

The key to the game was KU scoring more points than ISU. That really helped us to seal up the W in the closing moments.

There are some occasional inane posts when discussing KU basketball and occasionally it is tough to tell whether the comments are tongue in cheek or are just naive comments demonstrating a lack of understanding of the game. If your comment was an example of the first, I apologize and from your numerous other posts, I should have realized it was.

Great job by the team pulling out a W in Ames. KU was fortunate that ISU had an off night shooting the three-ball. If some of those had been dropping earlier I'd like to think that our perimeter pressure would have been stepped up to stop them, but as it was ISU was putting the pressure on themselves. The Hawks appear to be "getting it" more now and provided that Self can keep them playing with defensive intensity AND loose at the same time, I see the potential for a nice run a couple of months from now.

Wiggins seemed aggressive from the tip--more so than any game I can recall since dook.

Wayne is becoming the beast he's capable of, seeming to grow more with each game, though last night was not his best offensively.

I thought it was funny that Brent Musburger "discovered" Embiid last night. Then I realized that he's been doing football until now. Still, Musburger is a trained monkey.

Happy about the win, but WAAAAY too many turnovers. If ISU hits even a third of their 3s, we lose. 24 turnovers is unacceptable. Gotta take better care of the ball.