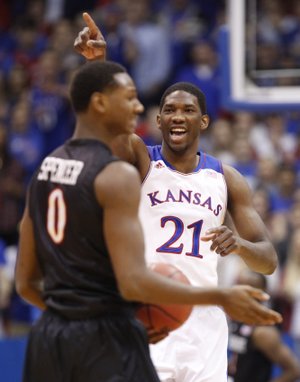 Kansas University basketball coach Bill Self, who often talks about the importance of toughness, praised junior point guard Naadir Tharpe for playing, despite a nasty left-ankle sprain, on Sunday in Allen Fieldhouse.

“I was proud of Naadir. Statistically, he didn’t have a great game (five points, 2-of-10 shooting), but he turned his ankle so bad on Wednesday that he hadn’t practiced or done anything besides treatment six times a day,” Self revealed after the game. The injury was not made public in the days leading up to the contest.

“He was trying to put himself in a position to where he could play today. He went a little bit halfcourt yesterday and felt good, but even with that you are nicked up and don’t have a rhythm. He took a couple ill-advised shots when we had a chance to come back, tie or take the lead.”

Tharpe, who had five assists and no turnovers while playing 34 minutes in KU’s 61-57 loss to San Diego State, acknowledged he was not 100 percent.

“I sat out a couple practices. I couldn’t really move like I wanted to,” Tharpe said. “You’ve got to play sometimes when you are not feeling well. I should be fine. I’ve got to make sure I keep doing treatment, and it’ll get better.”

Self said sophomore Perry Ellis, who hit one of eight shots en route to four points, may also have been less than 100 percent.

“Perry had an off day. For him that’s pretty obvious,” Self said. “He didn’t feel well today. I don’t know if he’s got a bug or something. He did labor.”

KU went to Ellis with the Jayhawks down, 57-55 with 11.9 seconds left. After getting fouled on a drive to the hoop, he made the first free throw and missed the second.

“I thought at the end of the game he’d be the best guy to drive a big. It worked perfectly,” Self said. “We got exactly what we wanted, just didn’t make the second free throw. That was a good play by Perry to get fouled.”

“It wasn’t a set person. It was a play we had multiple options,” Mason said, asked who would have taken the shot had he not been fouled. Mason hit one of two free throws.

“When he (Fisher) called timeout, we knew they were probably going to foul,” Self said. “I thought Steve (Fisher, S.D. State coach) called the foul instead of the official. That surprised me,” Self cracked, with a smile. “I’m sure he got fouled.”

Out off KU: Refs went to the monitor and gave the ball to S.D. State with 46 seconds left and the Aztecs up two when it was deemed the ball went off Joel Embiid out of bounds.

“He slapped the ball. I didn’t think I touched the ball, but ...” Embiid said, his voice trailing off.

Self on the Jayhawks’ 9-4 record: “I am disappointed, a little frustrated and that kind of stuff. It’s a group deal. We’ve got to look at ourselves, too, the coaches. We’ve got to do a better job with them (players), learn how to plug guys in better because we’ve got better players than the statistics show.”

“We’re not as good as I thought we’d be,” Self added. “Our players know that. I still think we’re going to be good, it’s just going to take more time than I thought. I thought we’d be a little tougher and more aggressive in certain areas than we are. I can live with missing shots. I can live with running ugly offense. I coached in the Big Ten. This would have been a high-scoring affair in the Big 10. ... I’ve got problems that we can’t close, we can’t make the play when we have to make the play.”

DNPs: Conner Frankamp and Brannen Greene did not play. Andrew White III missed a shot in a three-minute stint the first half.

“I’d like to play Brannen or Conner, but that’s not a game in which they’re ready to play yet,” Self said.

Of freshman Wayne Selden, who had six points off 2-of-8 shooting in 26 minutes, Self said: “Wayne’s not plugged into the game at all doing intangible things like he can.”

No rest: KU’s opens Big 12 play at Oklahoma on Wednesday, then meets Kansas State at home, travels to Iowa State, then meets Oklahoma State and Baylor at home.

“As hard as it has been, these next five games will be harder. We’re getting ready to play San Diego States every game,” Self said.

“It’s a joke,” he added of the difficult slate. “This is one thing I wish they could change, and no way they could. It’s not me complaining, it’s a fact. I think if the Big 12 schedule came out earlier, it could impact how you schedule your games.”

In other words, a coach might schedule some guarantee games right before the start of league play if he knew how tough the schedule would be in a given season.

“It was a hard first season,” Self said. “A hard schedule. We haven’t had a ‘gimme’ in a long time, since mid November. That’s a lot of games where you have to be right most every night.”

Stats: It marked the first time the Jayhawks have dropped the first game of the calendar year since falling to Wichita State on Jan. 6, 1987, and the first calendar-year-opening loss inside Allen Fieldhouse since losing to Nebraska on Jan. 6, 1962. ... The game marked season-lows for KU in points (57), field goals (17), field-goal percentage (29.8) and defensive rebounds (23). San Diego State amassed KU opponent-highs in offensive rebounds (19), defensive rebounds (32), total rebounds (51) and blocks (8). The Aztecs’ 51 rebounds were the most by a Kansas opponent since Iowa State had 57 boards against the Jayhawks on Feb. 21, 2004.

The Hawks got whupped by a better team. They need to learn how to play as a team and not a cluster of individual parts. The lessons need to begin Wednesday against OU.